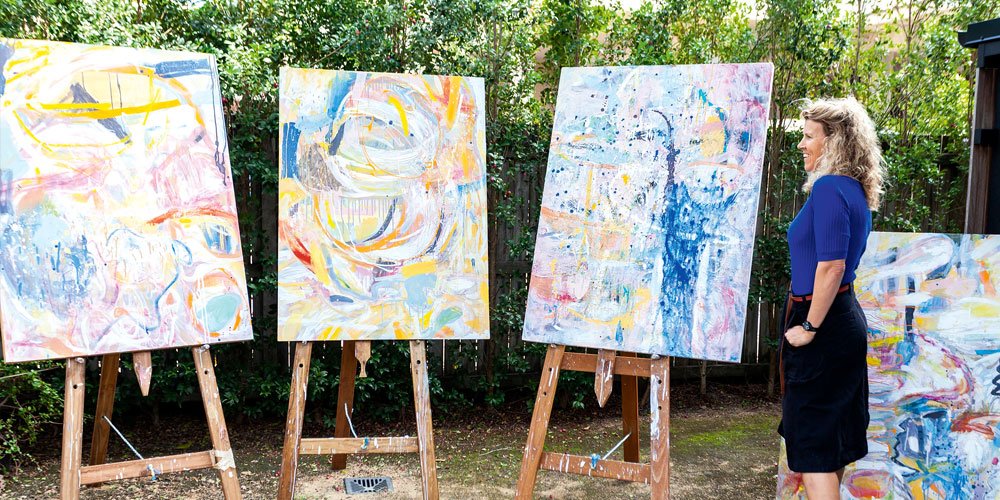 When COVID-19 restrictions gave Sunshine Coast residents just an hour a day for outside recreation, the impact on visual artist Rosie Lloyd-Giblett was huge.

Ms Lloyd-Giblett thrives on being out in nature, and the Noosaville artist and art educator had a daily ritual of painting en plein that was put on hold as the region battened down the hatches.

While this was devastating for her drive to connect with nature, it gave the mother of four the opportunity to take time to reflect on her past works and look forward to might what be possible in the future.

It was during this time of reflection that Ms Lloyd-Giblett and fellow artist Helena Jackson-Lloyd dreamed up Love Note to the Landscape, which is featured in the Horizon Festival schedule this month.

The artists have spent three separate days painting en plain at the Maroochy Regional Bushland Botanic Garden, Coolum’s First Bay and the Mooloolah Wetlands. With the assistance of Coast photographer, videographer and sculpture artist Yanni Van Zijl, they will release still and moving images of their artworks and how they were created at the three locations.

Ms Lloyd-Giblett says the covid lockdown took away the freedom to experience and pay respect to the natural environment for a period of time. However, it also served to grant her the awareness that accessing the natural environment is important to our health and wellbeing. Seeing the number of people who came to watch them create was testament to that.

Ms Lloyd-Giblett grew up on a cattle farm in western Queensland and says art classes and weekend expeditions with her art teacher while attending boarding school “anchored” her in her high school years. “Art was an intuitive thing; something I’ve always liked doing with my hands from when I was a small child.”

After high school, she completed a Bachelor of Fine Art and then a Graduate Diploma in Secondary Art and English. She worked in Africa as a volunteer before returning to work in the remote Australia communities of Barunga in the Northern Territory and Lockhart River in Queensland.

These roles, which she thrived in for a decade, allowed Ms Lloyd-Giblett to immerse herself in the varied landscapes and understand how one location is never the same two days in a row. The weather, the season and the time of day all impact the way a landscape looks and feels. As she began to mature as an artist, she says she began responding to the landscape in a more figurative rather than literal way.

Ms Lloyd-Giblett says her style is always evolving and she has reached a point where she can trust her intuition and paints based on what she is feeling more than what she is visually looking at. Her speciality is abstract expressions of a landscape.

“As an artist, you learn all of the skills you need and the rules you need to play by, like how to mix colours and how to draw realistically, then you slowly break down the rules to create your own language.”

Ms Lloyd-Giblett has lived on the Sunshine Coast for 20 years, first in Cooroy and now in Noosaville, and says it is one of the most beautiful natural landscapes. However, she is still compelled to travel to remote locations a few weeks a year to experience new environments.

She has received much acclaim throughout her career, including being a finalist in the Moreton Bay Region Art Awards, the NSW Parliament Plein Air Painting Prize, the EMSLA Still Life Award and winning Caloundra Regional Gallery’s The Local Content Art Prize for best watercolour in 2018.

While accolades are not something Ms Lloyd-Giblett seeks, she says winning the Lyn McCrea Memorial Drawing Prize in 2016 was a highlight.

She is exhibiting The Spaces Between the Trees at the Noosa Regional Gallery until July 18 and says it is her favourite collection to date.

“It’s the first time as a mother that I have finally been able to give my arts practice the full attention,” she says.

“My kids are teenagers now and I am comfortable in my teaching career, so my art is now part of this harmonious life.

“When I create my work, I try to remember the natural markings on tree bark, flickering leaves, the experience of crouching to touch the earth. I want to share this closeness I feel to the earth with the observer; to smell the foliage, view the coloured pathways and hear the same tune of the natural world that I hear.”

No stranger to Horizon Festival, Ms Lloyd-Giblett exhibited alongside her plein air group as part of the In:Situ exhibition at the Cool Art Picture Framing Gallery in Coolum on August 12 last year.

She says the festival is invaluable for the region. “It’s a bit left of centre and marvellous the Sunshine Coast Council has been able to find a way to run it this year despite the limitations,” she says.

“Helena and I were excited to collaborate on Love Notes to the Landscape. We meet regularly to draw and paint in national parks throughout the region and we hope our Horizon piece will encourage people to return to the landscapes with a new sense of appreciation for what we have here.”

You can also see Ms Lloyd-Giblett and Ms Jackson-Lloyd’s Love Notes to the Landscape footage and photographs on the Horizon Festival website from July 18 to 23.