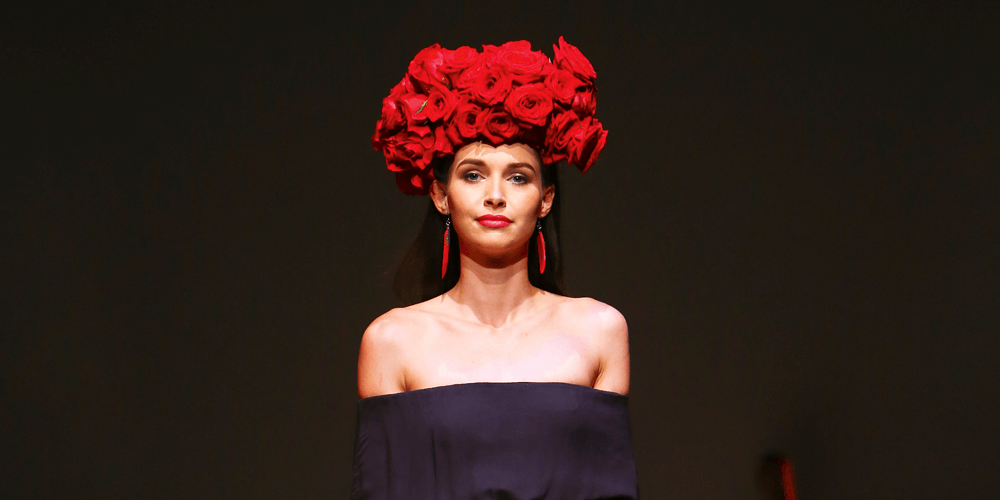 As Judy Copley adds the finishing touches to a bold and beautiful red carpet gown, she can already imagine the romantic tulle floating elegantly as the model shows off her tireless hours of work, strut after strut down the catwalk.

For those few minutes, hundreds of eyes will be fixated on this one dress, assessing, appraising, and imagining themselves wearing it to their next big event. These are the moments Copley can gauge the reactions to her creation, the moments she awaits with anticipation.

Exhibiting in the annual Sunshine Coast International Fashion Festival is something Copley has done since she was invited by festival founder Jacinta Richmond to showcase her first ever evening wear collection in 2008.

Judy Copley Couture was only two years old at the time and now, with the festival reaching it’s 10th anniversary this year, Copley has split her time between creating bespoke wedding gowns and a stunning collection of red carpet gowns with an eclectic mix of colour, detail, and texture fit for the ARIAs or the MET Ball to show on the festival runway.

Copley relocated from Darwin to harness more opportunities on the Sunshine Coast and while she says the region is an amazing place to live and work, up and coming designers have to work hard to get a foothold in the industry.

“While the opportunities are limited for my couture label here, I love the Coast,” she says.

“I’m sure the Coast will grow and with it, the opportunities for those involved in the fashion industry, which would flourish with more support.

“The talent is here, but being such a small and relaxed style of living on the Coast in comparison to the big cities, the opportunities are limited for couture designers and upcoming designers.”

Copley credits the fashion festival with creating a world-class industry beacon that once a year shines a light on the immense potential for both designers and models who live and work on the Coast.

“Without platforms like the festival, the skills and talents of these creatives would not be as widely recognised,” she says.

“The festival provides global awareness to our beautiful part of the world and highlights the many talented fashion designers, makeup artists, hairdressers, photographers, models and many other creative people that work tirelessly behind the scenes.”

It would be an understatement to say that building the festival from a fashion parade poolside at Surfair Resort, Marcoola with just 12 local labels and the uber-cool Ed Hardy, into Queensland’s only established fashion event with international recognition has been a hard road for founder Jacinta Richmond.

The festival ran for the first eight years as a self-funded event before the Sunshine Coast Council came on board in 2016.

This year, the festival will showcase more than 20 labels, with 70 models, hair and makeup teams supplied by the event and an army of 300 dedicated volunteers who work the back and front of house roles.

Richmond says the success and longevity of the festival came down to its continued relevance and importance for the community.

“The festival is a marketing tool, a chance for a designer to showcase a full collection, to show what the entire story and inspiration is about. It’s tactile as opposed to digital.”

The event has been held at many locations across the Coast, including Noosa, Coolum, and Twin Waters, but Richmond says none of them fit perfectly until they found The Events Centre in Caloundra.

Even as the festival is poised to offer its biggest and best line-up to date, Richmond laments the loss of innovative Sunshine Coast designers from past exhibitions and she believes a lot of it comes down to lack of ongoing support for the industry.

“I believe it was thriving more a few years ago, creativity wise. We had the most incredible design talent that were offering something very different and had all the potential in the world to move forward. Only two are still going,” she says.

“Some were ahead of their time, some over-invested, some couldn’t see the forest for the trees and the opportunities being provided to them, some were given better employment opportunities with major design houses and moved away from the region.

“When genius goes unappreciated, it is hard to persevere.

“The region has the potential to foster the industry and to do so in very different ways to what most may think, and not at the financial cost they may expect.

“We have the flexibility to do things our own way and to move forward, backward, sideways and do things no one else is doing.

“After 10 years, it is disappointing to see so much talent not fostered in our own backyard.

“We have been lucky to have national and international talent joining us, which is great for networking and tourism, but not for our local industry on a consistent basis.”

Richmond says “real” funding, whether from the government or the private sector, will allow the festival to reach its potential, and the creation of an industry incubator with high-level mentors has the potential to guide up-and-coming designers and help them to succeed.

Australians spend $5 billion on fashion each year and the industry employs 220,000 people, but the Sunshine Coast has yet to tap into our local designers’ success in a collaborative and innovative way.

“With the expected growth in population, we will fast become a city set in an environmental oasis.

“Fashion and retail are two of the biggest growth areas for the Sunshine Coast. We need to solidify the industry now, develop the talent and grow, so that we are strong in our own backyard.

“By supporting relentless vision, the Coast benefits,” she says.

“Fashion is a hard slog but it can be very big business.

“With proper support and respect, the industry could be an entirely new ballgame on the Sunshine Coast and truly rival Sydney and Melbourne.

“We have the contacts, we have the work ethic, we have the alternative visions, we already have the perfect natural location for a major fashion tourism destination.”

Internationally renowned designer Nicola Finetti has showcased collections exclusively at the festival since 2015 and he is also one of its biggest fans.

“It is a professionally run event and so relaxed. Everything runs smoothly, everyone is friendly.

“They make everything so easy for me and I enjoy meeting everyone. I am also a lover of the beach across the road from Rumba Resort where I stay.

“To go to the beach before a show is wonderful, bellissimo,” he says.

“It is also very fashion forward that the festival has models for all shapes, sizes, ages, genders and more.

“In 2015 down syndrome model Madeline Stuart was there. In 2016 drag queen model Jess Whoo was there.

“I understand that the Sunshine Coast Fashion Festival has done this kind of thing with models from the beginning. Much earlier than the other industry shows.”

With more than two decades in the fashion industry under his belt, Finetti says he was taken aback when Richmond sat down with himself, Assia Benmedjoub from Ragtrader Magazine and Amy Boers from Amee Boers Fashion Agency and listened as they shared their 2015 festival experience.

“You can see that Jacinta has listened and taken action on our advice.

“She is passionate and she wants success for designers and for attendees to enjoy the festival, you can see that in the year to year change.

“It is more international than other shows in Australia with regards to designers.

“I would like to see (the festival) become bigger, to grow. There is potential here, and the morning after the shows we have talked with Jacinta about her vision, but there is no money here.

“I spoke with your mayor last year and told him to give her lots of money.

“The vision and the potential are there but it is not valued.

“The designers need more education on business and design, the event more support but without the support, there is only so much that can be achieved.

“It is an expensive industry and you must listen, learn, and know what you are doing. The fashion industry on the Sunshine Coast has a knowledgeable leader.

“Respect and listen to her and it will grow.”

Richmond says the 10th year is an amazing milestone for the event.

“To look back and see the brands who have gone on to great things such as Coast-based Hive Swimwear, who are now stocked all over the world, and models who learned to strut their stuff in my loungeroom who are now with agencies around the world is amazing.

“I am proud to say we established fashion on the Sunshine Coast on an industry (as opposed to purely retail) level,” she says.

THE EVENT
The Sunshine Coast International Fashion Festival is on from October 20 to 21 at The Events Centre in Caloundra. Catwalk highlights include Nicola Finetti, Sunflair from Germany, NVK Daydoll from Milan, globally renowned couture designer Ali Charisma, Myer and a host of local designers. The festival also features a Trade Lounge with pop-up spaces for brands selling wholesale, an industry Q&A with renowned experts, plus the Sunshine Coast Style Awards and a chance to grab a copy of the coffee table book commemorating the 10th anniversary of the festival.
Tickets are still available at sunshinecoastfashionfestival.com.

On-trend: Hygge
How colour can help your fussy eater