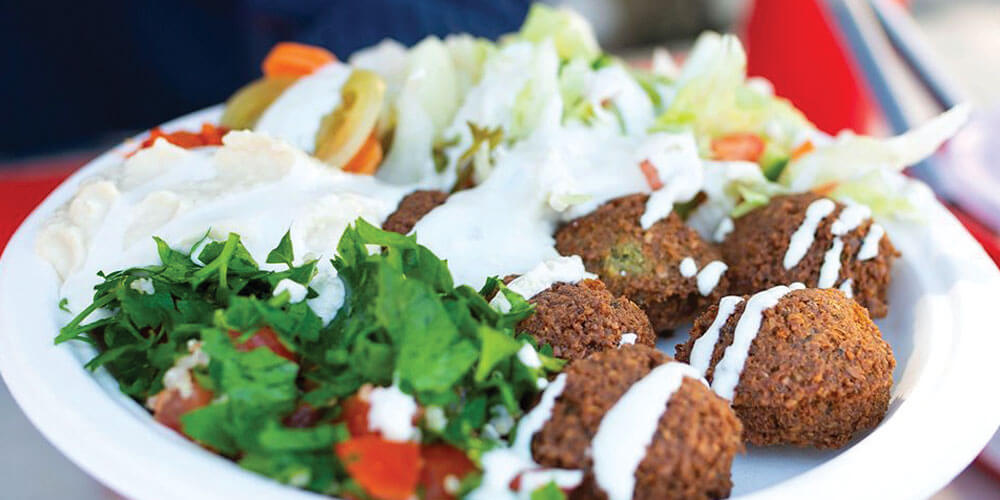 Joseph Shaich Yusuf from Falafel Baraka learned the art of cooking from his mother. “Growing up in Jerusalem, my yama, my mama, was always roasting spices, fresh from the market,” he says. “Cumin, coriander, paprika, black pepper, mama dry-pan roasting them one at a time, their individual aromas filling our home, feeding my senses, making my mouth water.

“These spices, roasted one at a time, were set aside in preparation for her making her traditional falafel mixture. Chickpeas were soaked overnight, onion and parsley were carefully washed and added into the blender with the soaked chickpeas. Her final addition was a touch of celery before the roasted spices were mixed in,” he says.

“This falafel mixture was set aside for hours and hours in the fridge, for the flavours to blend together … a Middle Eastern sensory experience.”

After leaving Jerusalem and moving to Australia in 2005, Mr Shaich Yusuf yearned for his mama’s cooking, particularly her homemade falafel, and so he began making his own.

For years, his friends suggested he share these Middle Eastern flavours. With his Australian wife Alicia by his side and drawing on her 15 years’ experience in the hospitality industry, Mr Shaich Yusuf made the decision to leave the construction industry and launch his business in 2011, not long after their daughter was born. Unfortunately it proved too difficult to crack the markets in Sydney and the idea was temporarily shelved, until they moved to the Sunshine Coast in 2016.

Falafel Baraka offers Middle Eastern street food, where the hero is the tasty traditional falafel, which is also complemented by a range of dips, and sweets such as baklava (layers of filo pastry filled with chopped nuts and honey) and ma’amoul (a pastry or cookie made with dates and nuts).

“Our falafel and dips are plant based and serve the current trend towards gluten-free and vegan,” Mr Shaich Yusuf says. “There are no additives, no colours and no preservatives. Just fresh wholesome produce sourced from local growers.”

His cooking is bold, yet refined, a product of his parent’s passion. “Joseph’s culture and family are very food orientated – Joseph’s father, Ahmed, used to have a side business selling falafels from a street cart in his home town,” Mrs Shaich Yusuf says.

“In Joseph’s culture, food is everything, not only to fuel bodies but an integral part of the social fabric. Simple yet good food is valued, and fresh, seasonal ingredients are often the hero of the dish. This also means the food is healthy and full of flavour and that is what Joseph wants to share – his love of good food and good health to help people be the best they can be.”

You can find Falafel Baraka at the markets at Yandina, Peregian Beach, Coolum and the Nambour night market.

Mr Shaich Yusuf has been working on the growth of his business as one of the 13 participants in this year’s GrowCoastal Food Innovation Accelerator program. Applications are now open for the 2020 GrowCoastal program, subject to support from funding partners in 2020. To find out more go to innovationcentre.com.au/growcoastal.

Continue Reading
You may also like...
Related Topics: Food, markets