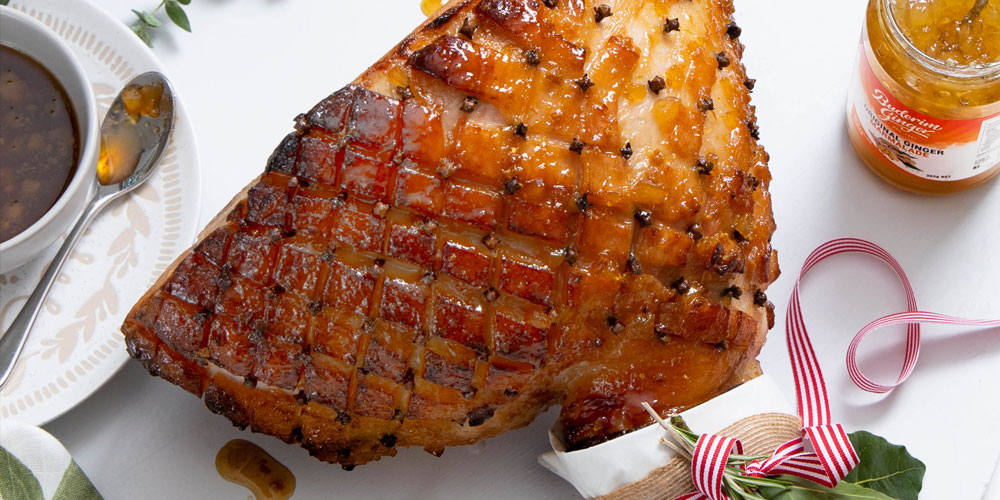 How do Santa, Christmas crowds and festive foods successfully traverse the path from snowmen to sandcastles? In our southern hemisphere summer, an outdoor barbie may replace the indoor oven, but in most other ways, it looks like Sunshine Coast locals settle for traditional fare – albeit with prawns and lashings of seafood.

Champagne makes an early appearance – even on Christmas morning for some families – along with Christmas puddings, pavlovas, glazed hams, roast pork and the humble barbecue chook.

This year, we talk to Sunshine Coast locals about their choice of culinary delights for Christmas and in the spirit of giving, they share their favourite recipes with our readers. 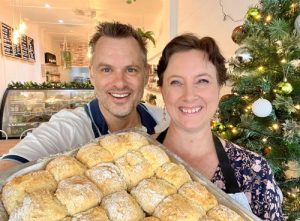 Martin says for him, a great Christmas day dinner means enjoying a picnic on the beach.

“However, this year is a bit sad as my dear mum is down south and has been locked down for months and will stay down in New South Wales.”

In keeping with the Christmas spirit of sharing and caring, Martin is bringing together a circle of friends and food.

“I’m rounding up my closest friends who can’t get to family and we will celebrate life, friendship and how blessed we are to live on the Sunny Coast.”

“Christmas Eve will be traditional fare with leg ham, prawns and pavlova and/or Christmas pudding,” he says.

“My favourite Christmas treat is a glazed ham, and my favourite thing is to bring out the ham on Christmas Eve with little hot rolls with butter and mustard whilst having a beverage or two,” he adds as a warm smile wafts across his face.

While Martin says he does enjoy a fine Christmas pudding, there is one special delight that takes his fancy.

“I love, love, love a good pavlova (must have berries and passionfruit on top of cream),” he explains.

On Christmas Day neighbours and friends are descending on Martin’s home to share in something a
little different.

“As most of us used to like to travel we are having a French feast with oysters, pate, terrines and Yule log for dessert,” he says.

Michelle says due to COVID, hospitality work demands and relatives living interstate, she misses being with her immediate family. However, that doesn’t mean being alone. Instead, she has her in-laws and a large work family to celebrate with throughout the festive season.

On Christmas day, she says: “I have grown up around our beautiful beaches so traditionally we head out for a surf followed by croissants, mangoes and champagne.

“We always sit around the family table with bonbons dismantled with paper hats goofily on our heads, enjoy fresh prawns, honey glazed ham, turkey, cranberry sauce and chat potatoes…  all smothered in gravy of course.”

Nevertheless, despite all that tasty food, there’s really only one thing on Michelle’s mind: “To be honest, I never eat much of the main course. For me, it is all about dessert and the brandy sauce! I have a teaspoon of Christmas pudding, three tablespoons of ice-cream and then fill the rest of my bowl with brandy sauce. It is my grandmother’s recipe and I look forward to having it every year. I treasure the brandy sauce and always make too much, so I can savour it for days as a special treat.” 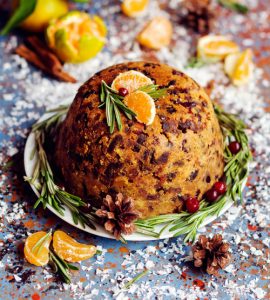 Add a seasonal summer twist to your pudding and serve with fresh mandarin or preserved blood orange.

Soak mixed fruit in brandy and leave covered till ready:

To serve – turn out onto plate

To flame – heat a little brandy gently in saucepan, ignite and pour over pudding on table.

“Our family is bang up for a good old Aussie Christmas feast no matter where our mob has gathered. This year it’s at our joint here at Warana and we’ll be celebrating with a mix of hot and cold culinary delights,” he says.

“We always have a solid triple smoked ham on the go, there’s a coupla barbecue chooks, a hot La’Mackle (boneless lamb roast wrapped in crackling.”

Todd doesn’t hogg the job all to himself, he dutifully entrusts his bro-in-law to curate a perfectly roasted pork on the Webber.

However, Todd takes full responsibility for the prawns, which for the Widdicombe household appears as an esky full of world-famous Mooloolaba prawns.

“It wouldn’t be Christmas without prawns,” he emphatically states. “This year I’m thinking of bringing back the good old ‘Strayan’ prawn cocktail as an entrée with my not-very-secret homemade seafood sauce. As long as there’s plenty of prawns for the prawn peeling comp, she’ll be apples.”

As always, there’s no discussion when it comes to dessert choices: “A firm favourite every year is my mum’s trifle. Sure, the pav’s a treat and we all love a good plum pud, but the classic trifle is KING. Also, because my mum Jen is 88 now, it’s a bowl of brandy with a dash of sponge, jelly and custard in it! Happy days.” 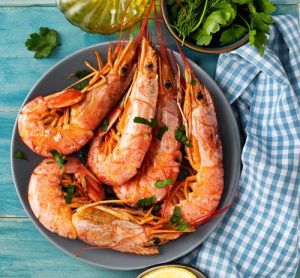 Most prawns are snap frozen at sea – just like baby peas are snap frozen to lock them in their prime. Unless you know your prawns have never been frozen, prawns (cooked or raw) can be refrigerated for two to three days between 0–4ºC.

Leave them in their shells, place them in a single layer on a plate or tray, cover tightly with plastic wrap and store in the coldest part of the fridge.

If your prawns have never been frozen they can be stored in the freezer for up to three months at -18ºC or below.

Continue Reading
You may also like...
Related Topics: Food, recipes