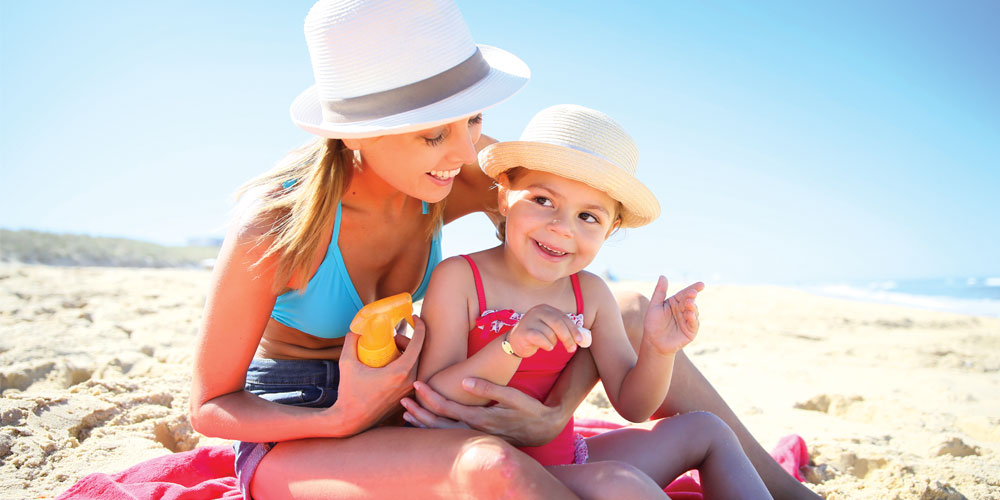 A few weeks ago, I became a statistic.

I am now one of the 434,000 Australians who have been or will be treated for one or more non-melanoma skin cancers this year.

There is no doubt that the ‘c’ word caused me heart palpitations and sweaty palms, but my GP quickly reassured me that if I were to get skin cancer, I’d got the best possible one – basal cell carcinoma (BCC).

While it’s still not a great outcome, most likely caused by years spent growing up in the surf without wearing a hat, it is the most common form of skin cancer found in Australians.

It does grow larger, damaging the tissue around it, but it doesn’t metasticise, or spread to other parts of the body.

When I first found this lump just above my hairline on my forehead, I assumed it was a pimple and proceeded to squeeze it and douse it with tea tree and for a week it seemed to disappear.

Then it came back with a vengeance and it continued to grow before taking on a shiny appearance. It was the final evolution that prompted me to take myself off to the doctor.

A quick look through a magnifying lens and she declared, “There’s blood vessels on top of this thing – it has to come out.”

The test results confirmed it was a BCC but there was a little bit that had been left behind from the first attempt at removal.

A second attempt was made and so I now have a five-centimetre cut on my scalp, held together by five stitches and next week, I will find out if I am officially clear of the little bugger.

The next step for me is a thorough skin check, which I will now do every six months.

This has taught me to be hyper-vigilant with ensuring my entire family is sun smart every day, not just those when it is blisteringly hot outside.

With National Skin Cancer Action Week running from November 17 to 23, I implore all of you to also take heed of my cautionary tale and pay attention to any changes that happen on your skin.

According to the Cancer Council, two in three Australians are diagnosed with skin cancer by the time they are 70.

It is estimated that more than 15,200 Australians will be diagnosed with melanoma – the most deadly form of skin cancer – this year, and more than 1720 will sadly die from the disease.

The sun’s ultraviolet (UV) radiation is the major cause of skin cancers and you can prevent them by implementing the old slip, slop, slap, seek (shade) and slide (on sunglasses) whenever you head out into the sun.

According to Queensland Health’s Skin Cancer Prevention Strategy 2017 to 2020 document, only 22 per cent of adults and 47 per cent of children in Queensland practise three sun-safe behaviours when outdoors, such as applying SPF30+ sunscreen, wearing broad-brimmed hats and protective clothing that would deliver adequate skin protection to prevent sun-induced skin damage.

According to one of Australia’s leading dermatologists, Dr Leona Yip, “Five minutes in the sun without protection is five minutes too long.”

“On cloudy and cool days, there is usually less infrared radiation [felt as heat] and visible light [seen as sunlight], but UV radiation can still be as intense as on sunny days. UV radiation cannot be seen or felt and therefore is an invisible danger,” Dr Yip says.

“Being sun smart isn’t just about being safe; it’s about life and preventing deadly skin cancers. Melanoma kills more young Australians than any other cancer. Sounds harsh, but in my profession, it’s absolutely true.”

Dr Yip says it’s important for adult role models such as parents, grandparents and carers to instil the sun safety message in children and to be proactive in ensuring they leave the house every day as protected as possible, as exposure to UV radiation during childhood and adolescence greatly influences skin cancer risk in adulthood.

It is important to be a role model by doing it yourself, and not taking a ‘do as I say, not as I do’ attitude.

A national Cancer Council study examining role modelling of sun protection behaviours in Australian adults highlights that parents are regularly protecting their children, but aren’t as good at protecting themselves.

The 2019 Summer Sun Protection Survey (Life in Australia), examined the sun protection practices of 2154 Australian adults, including 401 parents of young children aged one to 12, last January and February.

Cancer Council Australia’s National Skin Cancer Committee chair Heather Walker says it is important for parents to think about themselves too.

In Australia, sun protection is required when UV levels reach three or above, which occurs right across the country in spring.

“Despite its prevalence, most skin cancer can be prevented by using good sun protection. The free SunSmart app tells you when sun protection is recommended for your location and provides current UV levels,” Ms Walker says.

“Sun protection times can also be found on the Bureau of Meteorology website.”

There is still plenty of work to do with Aussie teens, with an alarming 62 per cent saying their friends think a tan is a good thing.

The Cancer Council’s National Sun Protection Survey provides a snapshot of Australian teenagers’ beliefs about tanning and 38 per cent of teens say they like to get a tan. Young women proved to have a greater desire to tan, with 43 per cent saying they prefer a tan.

In light of the findings, Cancer Council Australia and the Australasian College of Dermatologists are calling on teenagers and young adults to own their skin tone this National Skin Cancer Action Week. The #OwnYourTone campaign aims to encourage teenagers and young people to embrace their natural beauty and protect their skin from the sun.

Australasian College of Dermatologists president Dr Andrew Miller says the true meaning of a tan needs to be understood.

“Tanning is a sign that you have been exposed to enough UV radiation to damage your skin and we need to make sure teenagers get this message to prevent a rise in the incidence of skin cancer for the next generation,” he says.

Asymmetry – Look for spots that lack symmetry. That is, if a line was drawn through the middle, the two sides would not match up.

Border – A spot with a spreading or irregular edge (notched).

Colour – Blotchy spots with a number of colours such as black, blue, red, white and/or grey.

Diameter – Look for spots that are getting bigger.

Evolving – Spots that are changing and growing

What’s in your sunscreen?

Sunscreen – it is an essential component in your tool kit to prevent sunburn and skin cancers, but it’s important to remember that it’s not a suit of armour and should be used with other sun protection measures.

In other countries, sunscreens are considered cosmetics, but Australia regulates sunscreens as medicines. They must be listed with the Therapeutic Goods Administration (TGA) and must go through rigorous testing to ensure they meet claimed SPF (sun protection factor).

But what is the best type of sunscreen to use? A report released earlier this year by the FDA (the US Food and Drug Administration) states that only zinc oxide and titanium dioxide are recognised as safe and effective sunscreen ingredients.

These ingredients are known broad-spectrum physical sun protection, which reflect and scatter harmful UVA and UVB rays from our skin.

The organic filters are generally considered safer than chemical sunscreens, but they can give you a ghostly appearance, leading consumers to either avoid them or use less than is needed to be effective.

The micronising process, which makes the metal particles smaller, has solved this problem of ‘ghosting’ to a large extent, but has given rise to new concerns – such small particles may fall into the nano range, and these so-called nanoparticles carry their own safety concerns.

Australian consumer group Choice says research to date has not found nanoparticles in sunscreen can penetrate below the outer layers of skin, unless the skin is broken. In addition, manufacturers can coat the nanoparticles so they don’t react to form potentially hazardous free radicals. Certainly, the benefits of zinc oxide and titanium dioxide outweigh known risks.

Chemical sunscreen ingredients such as octinoxate, octocrylene, avobenzone and oxybenzone absorb UV energy and stop it penetrating the skin, but Choice says some chemical filters can cause skin irritation.

There’s also concern that some chemical sunscreens are endocrine disruptors, which means they have hormonal effects in humans. These include oxybenzone, octyl methoxycinnamate, homosalate and 4-MBC. “While this activity has been shown in animals and tissue tests, the doses used in testing are vastly greater than the amount used for human sun protection,” the Choice website states.

To find out more, visit choice.com.au and search for sunscreen and nanoparticles.