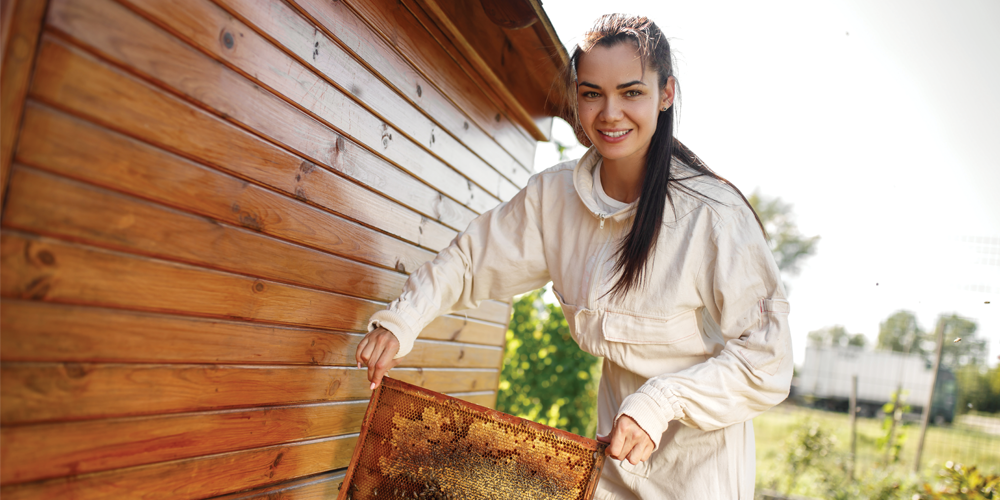 You can’t take them for walks, they won’t come when you call their names and you can’t snuggle up with them on the couch, but with the rise in backyard beekeeping, bees are becoming Australia’s newest pet.

While they may not be top-tier pets like dogs or cats, there’s a lot to love about bees – and it’s not just the unlimited access to pure honey that’s prompting thousands of Australians to begin beekeeping.

“Beekeeping in Queensland has increased exponentially and without precedent in the last three years,” says Jo Martin of the Queensland Beekeepers’ Association. “While this is overwhelmingly good news and a reflection of the growing awareness of bees and related products, the figures present an interesting scenario.

“The number of hobbyist beekeepers – that is, beekeepers with between one to four hives – has increased by over 75 per cent since 2015.

Celebrity chef and TV presenter Paul West is one of many who has jumped on the bee bandwagon. Speaking with My Weekly Preview in the lead-up to his appearance at the Queensland Garden Expo, he explains how he became fascinated while hosting the two-part ABC Catalyst series The Great Australian Bee Challenge.

“I wanted to deepen my understanding and appreciation of bees and dive into some of the science behind them as well,” he says.

“Bees are a really hot topic and the general public has a lot of interest in them, but the average punter doesn’t know too much about them. We have entomologists who dedicate their entire lives to specific behaviour sets in bees and there’s still so much to know and so much unknown.

“Bees are an incredible species of creature. They’ve been around for about 260 million years and to be around for that long, their behaviours and traits have to be so well refined and so complex.

“It’s incredible the work this tiny little animal can do. To create a kilo of honey, the total distance they have to travel is something like three times around the planet. Their societies are complex and their abilities are astounding.”

“Globally there are significant issues with decline of bee populations, but in Australia we have one of the most robust populations of European honey bees,” says Mr West. “We have yet to suffer from colony collapse disorder and the varroa mite is yet to hit our shores. We actually export hives to the rest of the world.

“In addition to that, we’ve got 1600 to 2000 species of native bees with more being identified as we speak.”

In his Catalyst show, Mr West encouraged people to establish their own hives in urban backyards, a trend that is taking off as more people realise keeping bees is not only a fun and satisfying way to connect with nature’s life cycles, it’s also fascinating.

“Without a doubt there’s more room for everyone in our community to become engaged in the protection and keeping of bees,” he says.

“There’s husbandry involved – you don’t just set a hive up and forget about it. In terms of production it’s pretty easy; it’s less maintenance than a dog. If you can keep a dog, you can keep a hive.

“The initial set-up cost, you’re looking at around the $1000 mark to set yourself up with a swarm, hives and personal protective equipment. That’s a one-off cost.

“In a good season a backyard beehive could produce 30 kilos of honey. That’s with about an hour every fortnight of maintenance – and you know it’s 100 per cent honey.”

“To your readership who wants to become involved in bee ownership, now’s the time to start thinking about it.

“Reach out to your local recreational beekeepers’ club. They are passionate and have a wealth of knowledge. They are super enthusiastic to see more people keeping bees and they will mentor you and hold your hand through the whole process.”

Mr West stresses the importance of registering your hive with the Department of Agriculture and Fisheries because if there are any disease or pest outbreaks, the department needs to know where all the hives are before it spreads.

“People think it’s over-regulation by government but they’re trying to protect the safety of Australia. Australia has such a huge border and there are ships and planes coming in on a regular basis. The varroa mite was discovered on a ship that came into Port Melbourne, but it was detected quickly and they averted the varroa mite apocalypse.”

Also speaking at the Queensland Garden Expo will be Dr Tim Heard, an entomologist, ex-CSIRO scientist and president of the Australian Native Bee Association. The author of The Native Australian Bee Book, he is Australia’s foremost expert on Australian native stingless bees.

“I’ll be talking about native stingless bees and I’ll also be talking about the broad diversity of bees that we have in Australia and their nesting and food requirements, which is where it interacts with gardening,” he says.

“Gardeners can provide flowering plants, which bees derive their food – pollen and nectar – from. By growing those plants, gardeners can help bees, but bees help us by providing us with a richer connection with nature.

“I’ll be talking about how we can set up a bee hotel, or a ‘B&B’. If you understand what bees need to nest in, you can boost numbers and provide a greater abundance of bees.”

While Dr Heard says media reports of bee Armaggedon are exaggerated, he does want bees to be given the protection they deserve, and the more people who become involved with looking after bees, the better.

“You hear exaggerated statements that if bees go extinct, so will humans. The things that make life possible don’t rely on bees. Rice, wheat, root crops – they don’t require bees for pollination.

“However, if bees went into a spiral of decreasing diversity, even if only 10 per cent of food production were lost, we’d have to clear more land, which would put more pressure on bees.”

Dr Heard sees a huge future for Australian native stingless bees, which aren’t affected by the varroa mite, which is lethal to the European honey bee. And unlike many native Australian bee species, the stingless bee produces honey – but there’s a catch.

“It’s barely available at the moment,” he says. “The world has just discovered stingless bees and everyone wants a bit of them. If you’ve got a beehive and you’re extracting honey from it, that’s going to slow down your breeding.

“But honey from native stingless bees has a huge future. It’s rich in flavours and aromas of the Australian bush, wonderful eucalyptus oil-type flavours.

“Native stingless bees are highly sociable like honey bees and are a very adaptable species that does very well in our urban areas in the warmer parts of Australia, like southeast Queensland. I can see a future where individuals have half a dozen hives in their yards and act like brokers – they split hives, propagate them and take them out to farms.

“This is pretty much the reverse of everything that happens in that farm-urban complex. Cities have a footprint where resources are drawn from farm areas – they go into cities and it’s one way. Here’s an example of how our urban backyard could contribute to agricultural production.”

Native stingless bees are completely harmless and are a great educational tool, able to be transported to schools and kindergartens where children can see busy bees in action.

“Their potential for education is enormous,” Tim Heard says. “Kids love them. Kids are so strongly drawn to them. They can look inside observational hives and see the working of the hives.”

So, could the native stingless bee become a new Australian pet?

“I think they are already well along that path of becoming a new pet,” Dr Heard says. “People who might have a backyard garden, they’re probably going to have a pond and maybe native plants.

What could bee better?

There are about 20,000 different species of bees in the world.

The average European honey worker bee lives for just five to six weeks. During this time, it produces around a 12th of a teaspoon of honey.

Australian researchers have proven bees understand the concept of zero and can do basic addition and subtraction.

To share information about the best food sources, honey bees perform a ‘waggle dance’, moving in a figure eight and wagging their bodies to indicate the direction of the food source.

As an industry, honey bee pollinators are estimated to contribute around $6 billion a year to the Australian economy.

Celebrate with The Wharf
Dining differently