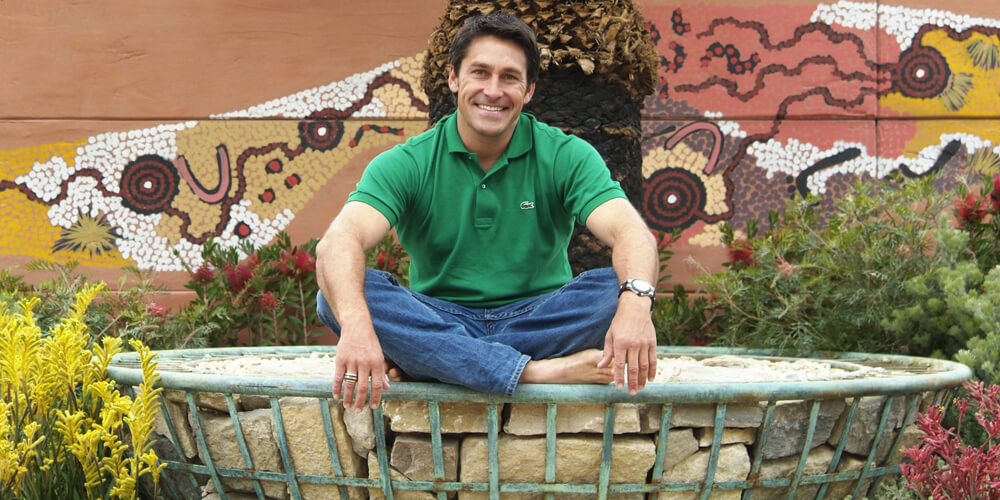 Although Jamie Durie is in the US and about to welcome autumn, the garden designer, interior designer and TV presenter says there is nothing like springtime in Australia.

“It’s when the wattle starts to bloom and you can smell the perfume of the wattle flowers and see the bright yellow colour through the Aussie bush,” he says.

Durie says the subtropical climate on the Coast is perfect for harnessing the power of outdoor living.

“I spent a great deal of my youth growing up on the Sunshine Coast.

In fact, my mum and some of my closest buddies still live there, so I’m often visiting,” he tells My Weekly Preview.

“The backyard is still valued more than ever in the Australian culture. It’s become just as important to renovate your outdoor room as it is to do your kitchen and bathroom.

“They are not only the most important lifestyle-enhancing rooms in the house, they are also key areas that will add to the financial value of your home.”

The six-time Logie winner and former host of Backyard Blitz says Australian gardens are natural and contemporary, and quite different to the more traditional style he sees in American gardens.

But whether tropical, exotic or Aussie natives are your preference when it comes to plants, Durie says it is important to design your garden around the aspects of living you “will enjoy luxuriating in outside”.

He says vertical green walls are the must-have garden feature this season, while DIYers keen to try something new to spruce up their outdoor spaces should look at breeze blocks and permeable paving in interesting colours, with ground covers planted in between the paving gaps.

“Designing with a limited plant palette and creating impact through repetition of the same limited type of plants seems to be a rising trend,” he says. “It’s a more minimal and restrained look, but does pack quite a visual punch through the art of repetition. Resort-style is my favourite style of garden, with a tropical plant palette.”

Now spending about five months of the year in the US, Durie has moved his focus away from garden design, which has netted him 34 national and international awards, including a gold medal at the prestigious Chelsea Flower Show in 2008.

He is now collaborating with manufacturing companies around the world and designing “transterior” furniture, which he says caters to the inside or outside of a home and promotes bringing the outside in.

Durie was a regular on The Oprah Winfrey Show from 2006 and presents several shows on American TV channel HGTV, including hosting four seasons of The Outdoor Room, while also running Durie Design and working on American and Aussie homes.

“My most recent projects include 8 Phillip Street in Parramatta, New South Wales, which is a multi-level, hotel/residential tower project where we’ve applied our transterior philosophy and Australian style of living to the tower’s entrance, rooftop bar on the 54th floor, pool terrace, street scape and floating gardens,” he says.

“Another project is The Burcham in Rosebery, Sydney, which is a wonderful example of modern sustainable multi-residential living.

“This is another project which is all about bringing the indoors outside, and the outdoors in. We wanted a much more symbiotic outcome, where buildings were more sympathetic to the landscape outside, and vice versa.”

Watching a plant cutting that his mum had placed on the windowsill transform into an independent, living organism was truly captivating for McCoy while dealing with his immense grief.

From that moment, no other career pathway entered his mind and he went on to work in gardens across Victoria and had the “ridiculous privilege” of working under the mentorship of the legendary British gardener Christopher Lloyd, who was the 20th-century chronicler for the heavily planted, labour-intensive, country garden.

McCoy, who was on the Coast for the 33rd annual Queensland Garden Expo in July, admits he has never been one to follow the trends in gardening, but has spent a lifetime attempting to break down the anatomy of a brilliant garden.

“It’s about sculpting spaces, and the way you are surrounded by, and respond to, the space is more important than how it looks,” he says.

“That might raise more questions than it answers, but coming from an international perspective and seeing gardens around the world, there are certain things that make our hearts skip a beat.

And that is more connected to feeling than the visual.”

McCoy says with garden fanatics having access to a cascade of two-dimensional images on social media, people get used to seeing things that look stunning in photos.

“Standing in a living sculpture is the most powerful thing that resonates with me. I could feel totally safe, horribly exposed, intimately surrounded, and intimidated.

“These are much more powerful emotional languages than just whether I can see some pretty flowers or nice colours,” he says.

“I needed to understand this so I could try to replicate these deliciously beautiful gardens somewhere else.

“You will never have a great garden until you realise it’s about how the space feels.”

While green thumbs are happy to do the hard yakka to create their horticultural masterpieces, McCoy says they are outnumbered 100-to-one by those who simply want to enjoy their outdoor space without having any interest in gardening.

“Every home owner has this need, this hunger, this desire for a beautiful outdoor space, and they might not be interested in what to weed or prune out.

“They simply want this space to lure them to come out,” he says.

“Historically, this is quite new. As little as 20 years ago, my profession was all about problem solving, what to grow here, how to treat this disease.

“Now, backyards are no longer utilitarian spaces with a Hills hoist and fruit trees, they are Balinese retreats, provincial farmhouse gardens, they are a means to capture a kind of mood.”

McCoy says there is a strong movement coming out of Europe that is expected to catch on in Australia this spring – celebrating seasonal plants.

“I’ve never been a finger-on-the-pulse kind of guy.

But one of the biggest things at the moment is plant-driven gardens where gardens change as the seasons do and plants are celebrated,” he says.

“I guess we have dominated nature so much for so long, that we are looking for some reassurance that nature is in charge and this is sparking and longing for gardens that reveal nature in terms of seasonality.”

Leonie Shanahan is the Sunshine Coast’s vegie garden guru, having set up edible gardens in more than two dozen schools as well as sharing her expertise at countless events and penning the book Eat Your Garden.

Shanahan says spring is the ultimate time to prepare your garden beds for a bumper harvest.

“You need to mulch, mulch, mulch to conserve water and protect and feed soils and sprinkle rock minerals on all gardens to give them a boost,” she says.

“If you are growing citrus trees, cut out all gall wasp now and burn or place in rubbish bin.

“Add calcium to vegie gardens that are growing tomatoes to prevent blossom end rot and foliar plants with seaweed to build up plant strength.”

Citrus do really well in spring and if you are looking to top up the vegie garden, plant asparagus, beans, beetroot, broccoli, cabbage, cauliflower, leeks, peas, rhubarb, silverbeet and spinach.