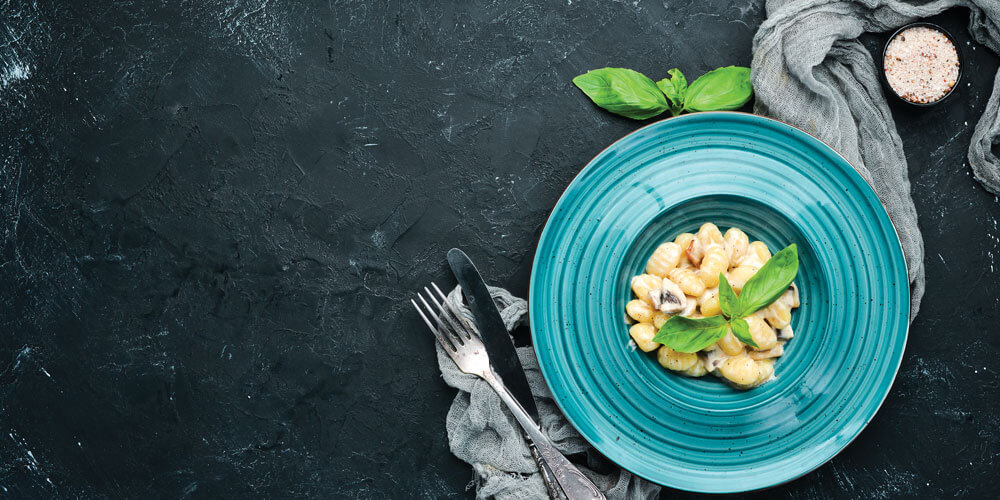 Gnocchi in shades of green, white and red catch my eye. It’s a subtle nod to the Italian flag and country in which this delicious dish originated.

“Gnocchi is an Italian potato dumpling, traditionally made from cooked potato and flour,” Filip Gubicza says.

“Making gnocchi can be a challenge if you haven’t done it before. You start with selecting the right potato, and there are over 4000 different varieties. Then it’s a process of peeling them, cooking them, mashing or pressing them, mixing in the right amount of flour, kneading and working the dough the right way, rolling and cutting them into small pieces, then cooking them again.

“Each step has to be perfectly timed, each ingredient has to be carefully measured,” he says. “It takes a lot of skill to make great gnocchi.”

Born and raised in Sweden to Hungarian parents, Mr Gubicza grew up loving food and cooking. He then developed that into a career as a chef, which took him all over the world before he settled here on the Sunshine Coast.

Mr Gubicza was highly sought-after and worked in some of Noosa’s best restaurants, where he says he experienced how making gnocchi in an already busy restaurant can add a great deal of pressure to kitchen staff and resources. It was then that he came up with Handcut Deli – crafting gnocchi for busy people.

“Handcut Deli became my expression for good food while creating a business for myself, and now, almost six years later, Handcut Deli has grown from a tiny sole trader to a small company, employing two people part time, and now we’re in our own production facility,” he says.

Handcut Deli has a range of eight gnocchi – including potato, sweet potato, beetroot, and green pea and ricotta – seven of which are organic and vegan and three of which are gluten free.

“Since we work with raw ingredients it’s not always the same from week to week. Root vegetables can change in cell structure considerably in seasons and different regions.

“By using our hands as our most valuable tool, we can make sure the gnocchi is made to perfection every time.

“Each potato is looked over and tended by hand before the dough is mixed, kneaded, rolled and cut.

“We make sure to use the most local, organic and best ingredients. Finally the gnocchi is blanched before it gets vacuum packed and frozen.”

Mr Gubicza also makes a range of condiments to complement the gnocchi – think burnt butter and sage, and mushroom and black truffle butter.

These are available at a range of shops and farmers markets for customers to cook at home, or to order at one of the local restaurants serving Mr Gubicza’s gnocchi.

Handcut Deli was one of 13 local businesses participating in this year’s GrowCoastal Food Innovation Accelerator program, run in partnership with the Innovation Centre Sunshine Coast and the Food & Agribusiness Network (FAN).

Applications are now open for the 2020 GrowCoastal program, subject to support from funding partners in 2020. To apply go to innovationcentre.com.au/growcoastal.

Continue Reading
You may also like...
Related Topics: Food