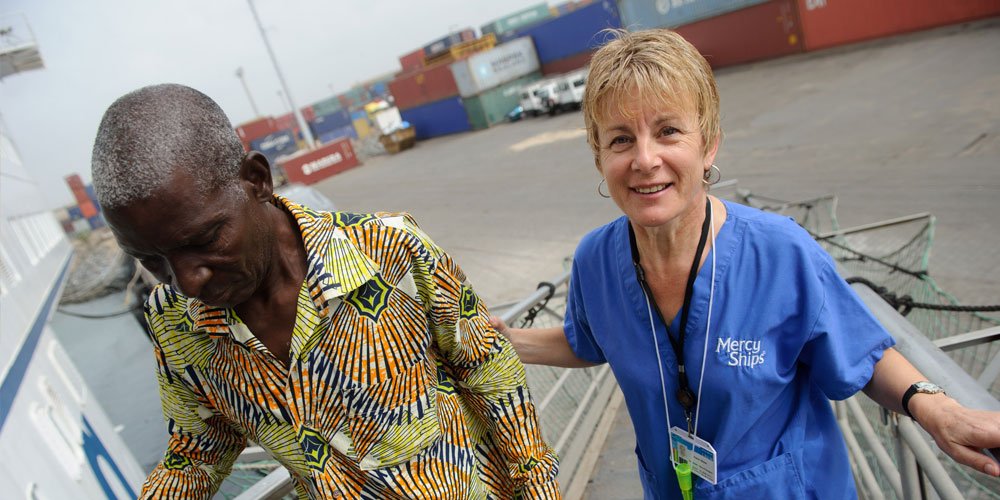 Karen Binns has dedicated more than 40 years of her life to a career in nursing, which has seen her practise in a variety of countries and working in a number of different fields.

But the Buderim resident says nothing compares to her time volunteering with Mercy Ships.

As the work of the global organisation, which has its headquarters here on the Sunshine Coast, is recognised on the small screen with the release of the never-before-seen director’s cut of The Surgery Ship on 7TWO, Ms Binns reflects on her time aboard the majestic vessel Africa Mercy.

It was no accident Ms Binns became a nurse. From a young age, she saw herself as a ‘people person’ and a stint as a nursing assistant opened her eyes to the possibilities of a career in nursing. From the outset, she was hooked.

Ms Binns qualified in the UK in 1979, after hospital-based training, and later, in Australia, gained post-graduate qualifications. She has worked in diverse areas of nursing throughout her long career, including paediatrics, medical, surgical and palliative care, and in settings as varied as hospitals, the community and a prison.

Ms Binns lived in Victoria before discovering the Sunshine Coast and relocated here in 1998 where she is now in the peri-operative field as a recovery and anaesthetics nurse.

Her vast experience, and willingness to give back once her children left home and established families of their own, made Ms Binns the perfect candidate for Mercy Ships.

“I first heard of Mercy Ships through attending a fundraising event in Mooloolaba over a decade ago. I did not know of the charity before then, nor that its Australian office was in Bulcock Street, Caloundra. But it marked the beginning of a journey for me that has been life changing,” she says.

“Mercy Ships ticked lots of boxes for me – my love of travel, challenge and adventure; an opportunity to give back to those less fortunate; the security provided by the ship, to name a few.”

Ms Binns was accepted by Mercy Ships in 2011, and, with a mixture of excitement and trepidation, travelled to Sierra Leone, for five weeks. She has since served in every subsequent field service, which has taken her to Guinea, the Congo, Madagascar, Benin, Cameroon and Senegal. She has spent around 86 weeks on board the ship and plans to clock up many more hours as soon as covid-19 restrictions ease and allow the crew to resume treatments.

“Living on board the ship is a challenge – sharing small cabins with strangers, not a lot of privacy or personal space, communal dining at set times, constant background noise, and many quirks of ship life – mostly first world problems that pale into insignificance when compared with the lives of many our patients,” she says.

“This is more than balanced out by making life-long friends from every corner of the world, bonded over shared experiences – once a Mercy Shipper, always a Mercy Shipper. They are the only people who can truly understand what the experience is like. There is lots of camaraderie, making your own entertainment; it is always an adventure to venture from the ship, and, of course, there is always lots of hard work.

“Working on board was a revelation, with teamwork excelling through respect, caring, and collaboration; everyone on the same page, to help those in need. I feel blessed to have experienced this and know that it is possible.”

Wifi on board the Africa Mercy meant Ms Binns could easily stay in touch with her husband Phil and keep on top of all of the activities her grandchildren were up to while she was abroad.

Ms Binns, who is also the assistant chair on the board of Mercy Ships Australia, says rather than despair at the level of need she sees whenever they dock in a new location, she is encouraged by being able to work with patients.

“All patients are memorable in their own way. It is confronting to see the conditions on which we operate, not because they are peculiar to those areas of Africa, but that they have not been treated – huge facial tumours, burns contractures, women incontinent through birth injuries, children with limb deformities, the list goes on,” she says.

“Some of the patients I have cared for are burned into my memory. I especially remember those who had suffered for years – the pain and discomfort, the shame and neglect, the lack of hope, and, of course, the children. It is very humbling to be part of their treatment and healing, and see the hope that it is indeed possible.”

She says it is also heartening to know of the investment Mercy Ships is making in the future of health-care delivery in these countries – through training and mentoring of local surgeons, anaesthetists, nurses and other allied health personnel. “In this way, the ship does not sail away at the end of its mission having helped only a relative few of the many,” she says.

Since its first voyage in 1978, Mercy Ships has worked in more than 70 countries providing services valued at more than $1.3 billion, with more than 2.7 million direct beneficiaries. Each year, more than 1200 volunteers from more than 40 nations serve with Mercy Ships.

“I think it would be impossible to serve with Mercy Ships and not come back changed in some way,” Ms Binns says.

“We have so much to be grateful for in our everyday lives, our health care, education, our standard of living, so much that we can take for granted, all because of the stroke of luck that had us born in a ‘lucky country’. I believe we are global citizens, and that we can all ‘pay back’, in small and local ways, or looking further afield.

“I have gained much more than I have given through volunteering. I have not become a saint, I am just a regular person, and I strive now to count my blessings.”

Ms Binns says she will be watching The Surgery Ship.

“It always feels so personal to me [to see the volunteers in action] as I recognise crew and patients, knowing that I have had a ‘front row seat’ in the operating theatres in action,” she says.

“It never fails to bring me to tears.

“I would encourage everyone to visit the Mercy Ships website, to consider supporting this very worthy charity, and, of course, to have what could be the adventure of a lifetime by volunteering in one of the many and varied roles available.

“It could change your life, and the lives of those in such need. It changed mine.”

Back to nature for Coast artist
The Coast loves: fish and chips