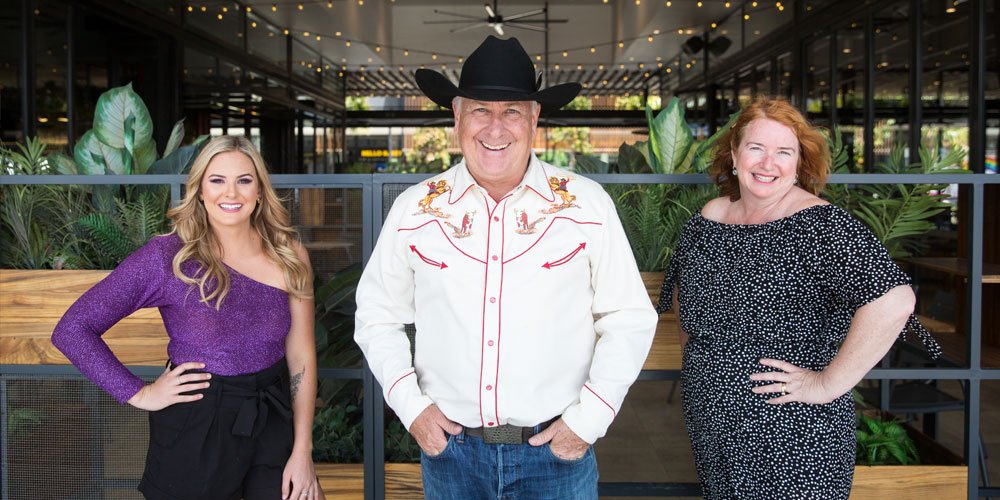 Live entertainment on the Sunshine  Coast is back – and back in a big way. Our arts and music scene suffered a hit this year, but with COVID restrictions in large entertainment venues now easing, Sunny Coasters starved of live entertainment are being encouraged to back away from the TV and rediscover how much creative talent we have in our corner of the world.

Excitement has been building in the lead-up to the launch of the entertainment precinct, the NightQuarter in Birtinya. Owners Michelle Christoe and Ian Van der Woude ran the NightQuarter on the Gold Coast for three years to great success and were planning to open here in March, before COVID put a spanner in the works.

“It’s been a difficult year for all hospitality,” Ms Christoe says. “We closed not only our Malt Shovel Taphouse, which opened in October last year, but also had to delay the opening of NightQuarter. We cancelled $750,000 worth of events and functions, employment for musicians, artists and people in the industry. To us, that was extremely devastating, so we can’t wait to open NightQuarter and start to put back into the arts, support the industry and incubate new talent.”

The NightQuarter will be unlike anything the Coast has seen, a unique blend of community, culture and street food. The mostly covered outdoor precinct comprised of more than 100 shipping containers will offer innovative food and drinks, live music and performance across five stages, as well as street art, bars, workshops and vintage amusement rides. In its former home on the Gold Coast, NightQuarter attracted big touring bands as well as cultivating local talent .

“We’ve attracted bands as big as UB40, Hoodo Gurus and Cat Empire in the past,” Ms Christoe says. “COVID has made us think differently about how we deliver music and cultural events, however. Until all the restrictions lift, we’ll be more likely to have dinner and show formats where we have chefs deliver restaurant quality food paired with unusual cocktails and whiskey in the NightQuarter live space.”

Dicko’s Country Spit Roast will be held on the last Thursday of every month over a six-month period, launching Cabaret Thursdays. The lovable Ian ‘Dicko’ Dickson will host a dinner and show featuring country music favourites performed with a live band. The NightQuarter will also host performances as part of the inaugural Sunshine Coast comedy festival from November 13 to 15. On Fridays and Saturday nights there will be up to 20 musicians booked across the precinct and Sundays will include chill sessions and a ‘pup-up bar’ for dogs.

“It has been heartbreaking to have to delay all this,” says Ms Christoe. “The culture of our business is about incubating talent and when you’re not able to do that, it’s devastating.

“It’s so important that our community gets away from Netflix and away from their phones and just connects,” says Ms Christoe. “They do it in Europe and Asia, where community gets together at nighttime with their families. We don’t do that enough in Australia.”

Stockland Birtinya Shopping Centre, which owns the site, is thrilled NightQuarter is finally close to opening.

“The dynamic, open-air marketplace complements our existing centre offering and positions the retail precinct as more than just a great place to shop and socialise, but a destination with a range of choice, convenience and entertainment.”

Prior to COVID-19, the Sunshine Coast Council identified that our region required new arts infrastructure. The arts and live entertainment industry has lost millions in revenue in 2020 and NightQuarter is expected to be one of the drivers of cultural tourism and community engagement with the arts, with the hope it will bring audiences back to our region and help stimulate our economy.

Two stalwarts of the Sunshine Coast entertainment scene who’ve also done it tough this year are The Events Centre, Caloundra and Venue 114 at Bokarina. Both have suffered heartbreaking cancellations and drops in revenue, but are back with new programs of events.

Steve Romer took the reins as general manager of The Events Centre three months ago, right in the midst of the COVID closures. With an impeccable pedigree in events and venue management, including Bluesfest, the Gold Coast theme parks and the Sydney Entertainment Centre, he was the right person to steer the much-loved Events Centre through the stormy seas of the past few months.

“We were still closed when I arrived but five days into the job, the state government announced that theatres could operate under COVID-safe industry plans. Then we had to get all of our COVID plans ready, called all our staff back in, and everyone worked tirelessly putting together five plans, which then had to be approved and endorsed by government. In terms of the theatre, we could open to a capacity of 30 to 35 per cent. With the government announcing on September 24 that we could have chequerboard seating, we’ve now come to a true 50 per cent capacity.

“We had our first event on the 29th of August, which was Tenori and entertainment at The Events Centre has been back and strong since then. We’re one of the leading venues in the state on a regional basis and it was great hearing our staff say they saw local residents walking up seeing the doors open again. People are thrilled and delighted. After the first show we did, the elation from the patrons as they were leaving was amazing. People have such an appetite to go out again.”

The recently refurbished venue is looking better than ever, and Mr Romer says it has 40 events booked between now and Christmas, including Russell Morris and the Queensland Ballet, as well as school formals and awards nights.

Lousie Thompson manages Venue 114 at Bokarina and says a full program of events for 2020  had to be put on ice.

“Being in this industry for nearly 20 years, when we closed our doors back in March and I had to let my team know I would be working off a laptop from home was so difficult,” she says. “We reopened in June but we’ve just been doing workshops and smaller meetings. We’ve gone from a 1400 standing live music venue to about 198 sit down cabaret style, or 350 theatre style max. With the new chequerboard seating approved, we can accommodate 700 theatre style, but we still can’t have standing for live music or dancing.”

Ms Thompson says the venue has taken the opportunity to undergo renovations and has some exciting events coming up.

“It has been a very big journey,” she says. “Music is something that brings positivity to everyone, it makes everyone’s soul sing, it’s a beautiful thing. Everyone has missed that engagement with people and performance, so we are excited to have a diverse number of events coming up. We have Venue 114 Live, a series of live music events that commence in November and we’re in the process of speaking with some incredible local artists about doing a Christmas themed event. We’re going to finish on a high after a very turbulent year.” 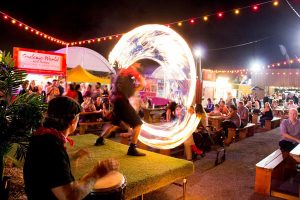 TV and music industry personality Ian ‘Dicko’ Dickson can’t wait to see live entertainment back in full swing on the Sunshine Coast, so much so he’s donning a cowboy hat and hosting a cabaret night of country music classics at the soon-to-open NightQuarter at Birtinya.

Dicko’s Country Spit Roast will serve up a 12-hour slow-cooked brisket for dinner, with entertainment provided by Dicko’s handpicked band, The Lazy Cs, who will perform singalong favourites like Jolene, The Gambler and Rhinestone Cowboy.

“These are the songs I heard on the radio in England when I was a kid,” he says. “They’re just classic pop songs that happen to be country.

“I just think right now we need a bit of a pressure valve. We need a bit of a laugh and togetherness and to say thank you for living in a part of Australia and the world that has really escaped the worst ravages of COVID. What I love about this community is it’s really engaged and this event is such a brilliant thing to be part of.”

Dicko, who lives in Maleny, has known Michelle Christoe and husband Ian Van der Woude since they ran NightQuarter on the Gold Coast.

“The fact they’ve decided to commit the NightQuarter to this region is brilliant for us,” he says. “It’s going to be one of the best venues in Southeast Queensland, if not Queensland. It will attract amazing bands, it’s a magical outdoor/indoor venue that will capture people’s imagination.”

The show will also feature Queen Cowgirl Sellma Soul & the Reverse Cowgirls, a naughty troupe of drag queens who will parade in an assortment of outrageous outfits and perform dance routines.

Tewantin musician Taylor Moss will channel Dolly Parton, Tammy Wynette and Linda Ronstadt and after a couple of months without gigs due to COVID, says she’s thrilled to be performing again.

“I’m super excited to be involved,” she says. “When Dicko got in touch with me, it was one of those things I couldn’t say no to. Dicko is so kind and giving. With creating these shows, he just wants to give back to the community.

“The music industry did stop for a while and everything stopped for a while. I think the Sunshine Coast needs an event they can go along to and sing along to their favourite country songs of all time. Even if you’re not a country music lover, everyone loves those songs. It’s really going to lift people’s energy and spirit.”

This will be an ongoing event and the first one will kick off on Thursday November 26. For more information and tickets, visit oztix.com.au

Don’t put off a mammogram, says Coolum mum
Mooloolah men get a shed