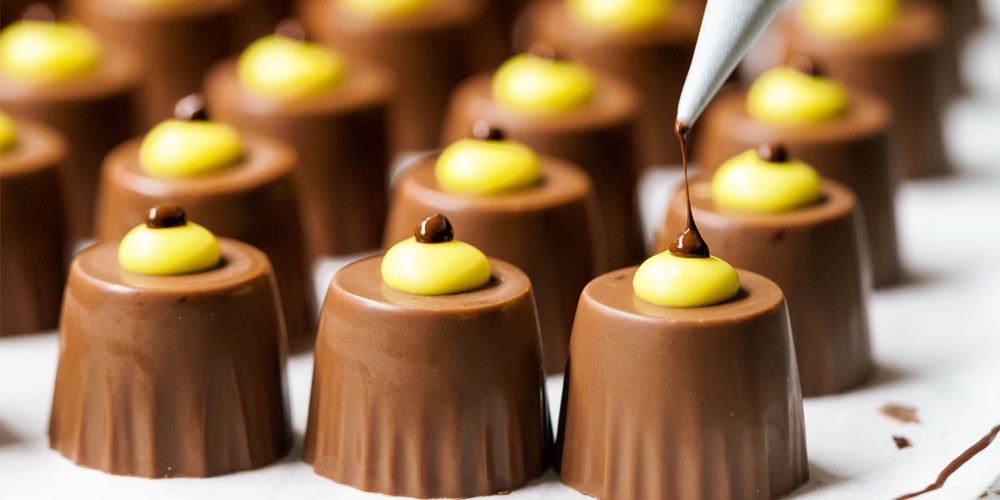 There’s a quiet chocolate revolution happening across the Sunshine Coast. Chocolate lovers are fast discovering the refined pleasures of artisan chocolate and a number of local companies are catering to the demand by producing exquisite chocolate for the sophisticated palette – and business is booming.

Over the past five years, Maroochydore’s Brigid Woolnough has been able to take her boutique chocolate business Kokopod from a hobby she enjoyed alongside her job as a primary school teacher, to a company that employs 12 people and has 400 stockists around the country, with plans to go global.

With its headquarters in Buderim and its retail outlet doing well at The Ginger Factory in Yandina, in 2019, Kokopod won the small business award for food and agribusiness at the Sunshine Coast Business Awards and the future is looking delicious for this local startup.

“I went to Germany in 2002 as an exchange student in high school and the father in my host family worked for a big chocolate corporation,” Mrs Woolnough says. “That was my first intense experience with European chocolate and chocolate we didn’t have in Australia. Whenever I visited Germany, I was always bringing back European chocolate.

“It was really different, really creamy. It wasn’t sweet and didn’t have that itch on the back of the throat or the oil film that sometimes sits in your mouth when you eat cheap chocolate,” she says. “It felt like real food. The vanilla was real vanilla. I felt satisfied afterwards. I didn’t feel sick or hung over or needing more. Good-quality chocolate gives you a sense of satisfaction.”

While Australian taste buds have matured in regards to chocolate in recent years, we still love our cheap blocks of supermarket chocolate and consume it differently to Europeans. According to a 2019 study by Roy Morgan, 14.2 million Australians aged over 14 consumed chocolate in an average four weeks and chocolate bars were the preferred choice over blocks or boxed chocolates.

Of course, Easter is the time of year when we scoff the most chocky, with Australians among the top consumers of chocolate Easter eggs in the world. But we rank way below Europeans in our overall chocolate consumption. According to market research company Statista, the Swiss are the number one chocolate chompers in the world, with Aussies coming in at number 16.

“In Europe, they eat chocolate at all times of the day,” says Mrs Woolnough. “They eat it for brekky, they drink it, they eat it after lunch, after dinner. It’s a food group in itself. It isn’t treated as a reward or anything. It’s more a moment. They bond over it… It’s like a coming together, a ceremonial experience. Growing up in Australia, it was very much a reward or a treat.”

Julie Walters who owns Montville store Chocolate Country, says if you’re going to indulge in chocolate, make it the best.

“Let’s face it, chocolate has a few calories in it,” she says. “If you’re going to eat something, make the calories worth it. I would always say if I was going to eat anything, I want it to be the best. I think also when you have something that’s beautifully made and delicious, you don’t need as much of it. You get more satisfaction instead of just mindlessly eating a whole block.”

Mrs Walters had no experience in chocolate-making when she moved here from the UK and bought the business in 2014. She employed a pastry chef who had been a chocolatier in Switzerland and trained alongside him for three years.

“It’s a bit of a science,” she says. “There’s a lot to it because you’re working with very small temperature changes. There are two different types of chocolate: couverture and compound. In Belgium, couverture is the only thing you can call chocolate.”

“I do chocolate classes and we teach people how to temper chocolate. It’s even more difficult in Queensland, because we have humidity.”

When it comes to consuming chocolate, Mrs Walters says it’s all about quality, not quantity. “I love our raspberry truffles and my current total weakness is our Honey Beehive, one of our little truffles.

“Chocolate makes people happy. Nobody needs to eat chocolate. If you’re eating chocolate, you’re giving yourself a little treat. People care more about what they’re putting into their bodies these days. If they know there’s no nasties in there and they’re having a natural product and supporting their local communities, all of those things give people permission to enjoy chocolate without feeling quite so guilty.”

Production at Chocolate Country is ramping up for Easter, the busiest time of year after Christmas, Mother’s Day and Father’s Day, and plans are in place for the Easter weekend. “Over the Easter weekend, people can come in and design and make their own 250-gram slab in the shape of an Easter egg,” Mrs Walters says. “They can choose their chocolate and add whatever they want to decorate it in the shop. It’s just a fun thing to do with the family for Easter and it saves them buying an Easter egg.”

At 71, Steve Hills – who bought Maleny Chocolate Company for a hobby in retirement – has never been busier. Seven years ago, he and his wife left behind careers in scuba diving to retire in Maleny and purchased the business, which was operating out of a small demountable shed in Eumundi. In that time, they’ve expanded the business to their chocolate factory in Maleny, which employs 16 people and includes a retail store with a viewable window to the factory so customers can watch the chocolate being made. 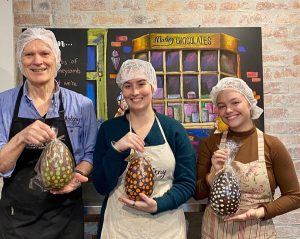 “It has really taken off,” Mr Hills says. “Supermarket chocolate is tasteless and bland and once you taste nice chocolate, you can’t go back to the stuff loaded up with sugar and fat. We don’t do anything that’s artificial or has flavourings or preservatives. Some chocolate you buy in the supermarket might have been made in Europe three years ago, then sat on a wharf. We make our chocolate fresh every day.”

Mr Hills inherited just six wholesale customers when he bought the business and is now inundated with requests.

“I’m not exaggerating, over the last year we would be receiving requests to carry our stock twice a week. Week in, week out, we get two or three companies who want to carry our stuff. We have to turn most of them down; we’re so busy we can’t do them justice.”

Mr Hills did some chocolate-making courses in Melbourne when they bought the business and his wife is a cordon bleu chef, so they have no trouble creating a fine product. They’re gearing up for Easter with some special products and vouchers for $100 worth of chocolate hidden inside their Easter eggs, Willy Wonka style.

“I absolutely love it,” he says. “I should be retired but I can’t wait to get in every day. I get in before the staff and I leave after them. I really enjoy what I’m doing. You get to see the delight on the kids’ faces. Kids come in and you show them how to make chocolate frogs. Their eyes light up and it’s just really good.”

“I only really eat the dark chocolate,” he says. “The stuff that makes you fat is the cheap, sugar-laden chocolate as opposed to the good-quality stuff. That doesn’t make you fat. I eat it every day and I have done for seven years. And let me tell you – I have no cavities. Not one cavity.”