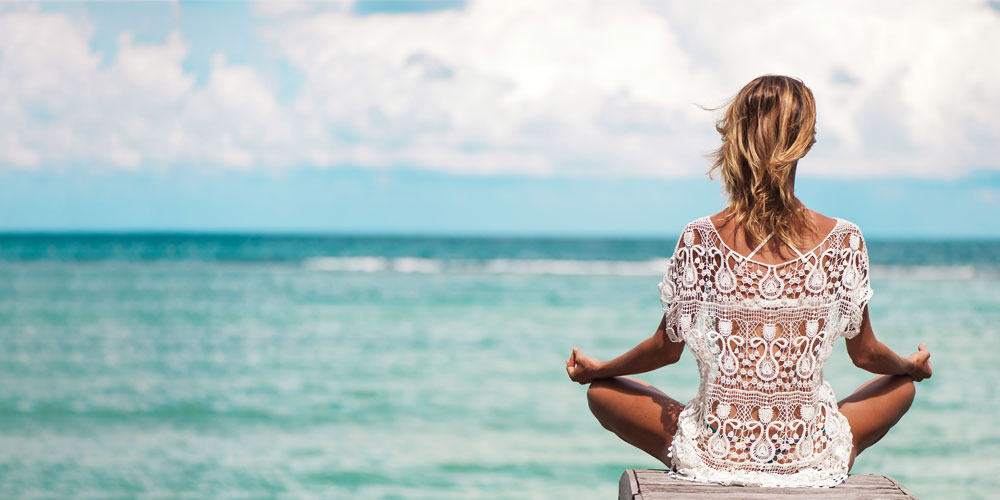 Erin Ashley was walking through Sunshine Plaza in 2009 with her husband when without warning, he dropped to the floor and died, right in front of her. It’s the kind of shock that would send anyone down self-destructive paths in order to numb the pain, but Ms Ashley chose a different path. She chose mindfulness.

“He was only 35,” she says. “It was totally unexpected and they could never determine a cause of death.

“My daughters were four years old and four months old at the time. I could have told myself stories about how unfair it was for them. Why did it happen? It’s all a story and I got to choose whether to make it an empowering story or a victimising story. I chose to design a happy future for myself.”

Ms Ashley wasn’t new to mindfulness. A former marine scientist, she’s practiced yoga for 20 years but says it wasn’t until experiencing the sudden death of her husband that she really learnt the healing benefits of mindfulness, which underpins both yoga and Buddhism.

The word mindfulness has its origins in the ancient Indian language of Sanskrit and literally means: ‘remember’. It was popularised in 1979 by Jon Kabat-Zinn, who designed an eight-week stress-reduction program for chronically ill patients to improve mental and physical health.

He described mindfulness as “awareness that rises through paying attention on purpose, in the present moment, non-judgmentally”.

Ms Ashley credits mindfulness with helping her survive the biggest trauma of her life and subsequently going on to meet her new husband, success coach Kurek Ashley, who she married three years ago and lives with in Eudlo. It also enabled her to stay strong for her daughters.

“I feel my previous practice had built a degree of resilience. Because of the extremity of the scenario I definitely went into a shock mode afterwards, a post-traumatic stress period.

“It really took reminders of mindfulness to be able to access those resources again. It started with noticing simple everyday things again.

“For example, if I was sitting in a chair, even if seconds at a time at first, being able to notice myself in the chair, feet touching the chair, noticing my breath, starting to train my attention to focus on an object in real time.

“What happens to a lot of post-traumatic stress syndrome sufferers is that the mind wants to flash back to the traumatic event and replay it over and over again. That’s a natural thing for the mind to want to do and the neural pathways to flash back like that.

“To come out of living in the past or an event that’s happened in the past, you need to tune into real-time moments – grabbing seconds, even washing the dishes and noticing the temperature of the water.

“Day by day, those mindfulness moments become longer and longer and the flashbacks to the trauma become less and less.

“That experience of detaching from story and coming back into experiencing life in the present moment enabled me to pretty quickly lead a happy life again,” she says. “The next step was to teach it to others; to share this gift I felt I’d received.”

Ms Ashley completed her yoga teacher training in 2013 and went on to do mindfulness coaching training at the Eudlo Buddhist retreat Chenrezig Institute with teacher Corey Jackson.

Mr Jackson is wary of using the term mindfulness because he says it has been misinterpreted and commodified in recent years – there are 9.7 million posts under #mindfulness on Instagram at the time of writing and cynics sometimes refer to it as McMindfulness.

“There is no standardisation of the term and it can mean radically different things,” he says. “I’m cautious when I use it. I have a clear definition that comes from India.”

Mr Jackson reads and writes Tibetan and has a degree in psychology and Sanskrit from the University of Sydney. He’s currently studying a PhD in mindfulness at the University of the Sunshine Coast and is a practicing Buddhist.

“The official definition of mindfulness from Sanskrit is ‘the non-forgetfulness of the mind in relation to an object, having the function of non-distraction’,” he says. “The object is just something you pay attention to, it could be a memory or your breath.”

For his PhD, Mr Jackson is researching how mindfulness can help regulate emotions, particularly for people under a lot of stress. He works with paramedics, PTSD sufferers, oncology workers, teachers and hospice workers, helping them to remain emotionally balanced in the midst of a stressful situation.

“Alan Wallace and Paul Ekman have taken authentic practices as they exist in text and taught them to be useful in the modern world. The techniques are taken straight out of Buddhism and applied to emotions.

Mindfulness practice on its own is secular, but he cautions people to seek out a teacher who really understands the concept, can properly define it and pass on its many benefits. Mindfulness techniques stretch back through 2500 years of peer-reviewed practice and he says they really do work.

“To oversimplify them or water them down means you just don’t get the potential of the results you could get from them.

“There was a mindfulness backlash a couple of years ago. There was this idea there was a darker side. People were struggling in their meditation – if you get people to sit with themselves long enough, stuff comes up.

“If they have no background in how to deal with it, that’s dangerous. There are people out there teaching mindfulness or writing books who don’t have a background in the training and are not in a position to help. You have to back people’s practice up with understanding.”

While you could be forgiven for thinking mindfulness is the key to all the world’s ills, Mr Jackson says it does have its limitations.

“On its own, it gives you the option to prevent a destructive reaction. With enough training, you can notice you’re getting angry and realise it’s not helping. You can change your focus. You can make yourself a coffee or look at fluffy kittens. That’s about as much as mindfulness on its own can do.”

Insight, kindness and compassion training come next, but many people find just getting their heads around mindfulness is enough of a challenge. To begin implementing mindfulness right now on your own, he suggests this: “Whenever you can, scan through the body top down. Start from the face and look for muscles that are tense and just try to relax them. Get into the habit of doing that, and then set up cues. A phone ringing is a good example. When a phone rings it instigates all these automatic reactions. Sit back, scan the whole body and get relaxed. Then very intentionally answer the phone. The same is true for a crying child. As soon as you hear a crying child, just relax and engage with the child and be fully present.”

The great thing about mindfulness is that it’s not a destination, but a journey. You can start anywhere and go as far along the path as you like. When Mr Jackson teaches beginners, he suggests they practise the technique for just 15 minutes a day.

“They usually begin to experience the results in a week or two,” he says. “From there, it’s how enthusiastic you are about it. I got really interested in it. I’m a fanatic, but it doesn’t have to be like that.”

Jessica Mcilveen is a social worker from Sippy Downs with a background in child protection and foster care, who trained as a yoga teacher to help with her work. She runs yoga classes for children between the ages of four and 18 both in foster homes and in NGOs such as Mission Australia and Uniting Care.

“Children absolutely love yoga,” she says. “Children who’ve experienced trauma, all they want to do is move their bodies, because that’s when they feel safe. When they’re sitting still, it creates feelings of anxiety. Most of the time, their favourite part is the meditation time. They don’t know why, but they finally get to feel calm, be in a safe space where their body feels relaxed.

“Mindfulness is the foundation of yoga,” she says. “It’s about being present. We’re trying to ensure the child’s mind and body are in the same place. When they have extreme anxiety, their mind is in the future and their body is in the effects of what happened in the past.

“We teach them breathing techniques to ease their anxiety. We make breathing bracelets, which they can have in their pocket at school, something they can turn to to make them feel more comfortable.

“In terms of anxiety, the breathing is super important.
A few children go to their room and use their breathing feather or their breathing bracelets rather than getting really angry and throwing things around the room or at the carers.

“I find it the most rewarding job I could ever have hoped for,” she says about working with children.

Could you do a 10-day silent meditation retreat?

Dhamma Rasmi Vipassana Meditation Centre in Pomona offers 10-day residential silent meditation courses offered by donation only. Once you’ve completed your first 10-day course, you can attend shorter courses, all run by volunteers. This form of meditation is based on a pure mindfulness technique practiced by the Buddha 2500 years ago and is strictly non-commercial and non-denominational. Visit rasmi.dhamma.org.

Mindfulness tips from The Happiness Trap

The Happiness Trap by Dr Russ Harris suggests we are all caught in a psychological trap, where the more we strive for happiness, the more we suffer. The book offers mindfulness techniques to help people break the cycle. Try these mindfulness techniques from the book:
• Once a day, examine and appreciate a familiar object that you normally take
for granted.
• When you eat something, take the opportunity to savour it.
• Next time it’s raining, pay attention to the sound of it.
• Next time it’s sunny, take a few moments to appreciate the warmth and the light.
• Before you get out of bed in the morning, take 10 deep breaths and focus on the movement in your lungs. Cultivate a sense of wonder that you are alive.

Continue Reading
You may also like...
Related Topics: Health, mindfulness