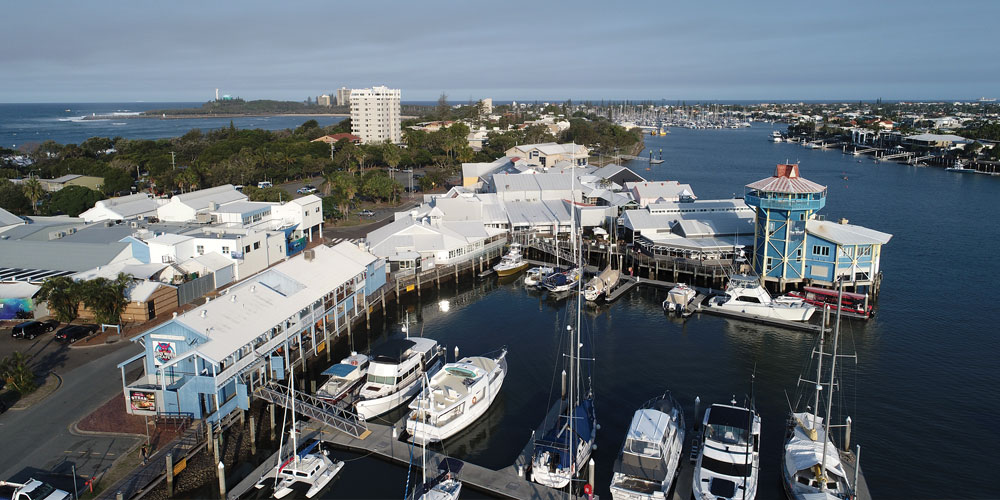 It was December 1988, and Queensland was reeling from the ongoing revelations of the Fitzgerald Inquiry.

A year earlier, Caloundra’s Mike Ahern had accepted the poisoned chalice of the state premiership but, amid the political furore, had the much more pleasant duty of officially opening The Wharf at Mooloolaba.

Nine months later, Underwater World, where you could “go scuba diving without getting wet” was ready for its first visitors.

The enterprise was to change the face of the Mooloolaba Spit.

It was first announced in September 1987 that state cabinet had approved a $4.5 million aquarium on a lease of 3000 square metres of Crown land opposite the Coast Guard headquarters.

The original proposal also involved a backup plan: if the spit site didn’t work out – at the time controversy was running high over development of the area – an alternative was opposite the Mooloolaba Hotel (where the Mantra now stands).

“The total structure would be built beneath the present grassy knoll and cover the area between the caravan park and the new council car park,” the proposal stated.

The hotel has long since disappeared but at the spit, The Wharf and Underwater World – renamed Sea Life Sunshine Coast in 2013 after a $6.5 million upgrade – have become well-established landmarks about to celebrate their 30th birthday.

Although it was originally hoped to capitalise on visitors arriving for Expo 88, it was soon realised this wouldn’t be possible and Underwater World opened at the end of September 1989, nine months after The Wharf. The project ended up costing double original estimates at $9 million. But the Sunshine Coast had “a tropical oceanarium which is the largest in the southern hemisphere and one of the world’s best”.

“Centrepiece is the 80-metre clear acrylic tunnel which winds its way through a vast underground tank allowing visitors to experience the thrill of face-to-face encounters with the bold and beautiful dwellers of the sea,” the opening crowd was told. “A moving pathway glides through three separate marine environments.”

It was exciting stuff. The moving walkway gave 180-degree views as it wound through a dark rocky reef for shellfish and crustaceans, the bright colours of a coral reef and the predators tank for sharks and stingrays.

On opening day, I was the proud holder of ticket No. A001, and a few years later had the pleasure of dining in the acrylic tunnel, although it was tricky swallowing seafood with all those fish floating around. And many a young Sunshine Coaster will remember the thrill of a sleepout in the tunnel surrounded by sharks, as a highlight of the school year.

Next door, The Wharf brought a whole new experience to Mooloolaba, and was also creating memories. Its designers said: “This multimillion-dollar tourist facility is built on timber piles out over Mooloolaba Harbour, in the style of a turn-of-the-century dockyard.”

And they waxed lyrical about its allure for both residents and visitors: “From the harbourfront boardwalks to the old-world charm of the fine emporiums which display everything from local crafts to high-tech kites and fashion, The Wharf is a place to browse, to buy something different or just sit and watch the boats plying the river.”

In the wake of Expo, there were also entertainers wandering the precinct. It was certainly ahead of its time.

In the mix of shops was a Kodak minilab, which was a big deal in the days before mobile phones gave instant photographs.

At its opening, Friday’s was listed as “a waterside beer garden, cocktail bar and night club” but it was as the latter that it became the go-to entertainment venue for a generation conceived around the same time as The Wharf project itself.

There was scuba training in a tank on site, paraflying, the Top Deck amusement centre and a carousel, and when Underwater World put in the seal stadium, it ranked as one of the best in the country.

It’s all a long way from 1890, when William Pettigrew built a wharf, timber depot, store and two houses at Mooloolah Heads, which was renamed Mooloolaba in 1920.

Continue Reading
You may also like...
Related Topics: Mooloolaba, The Wharf