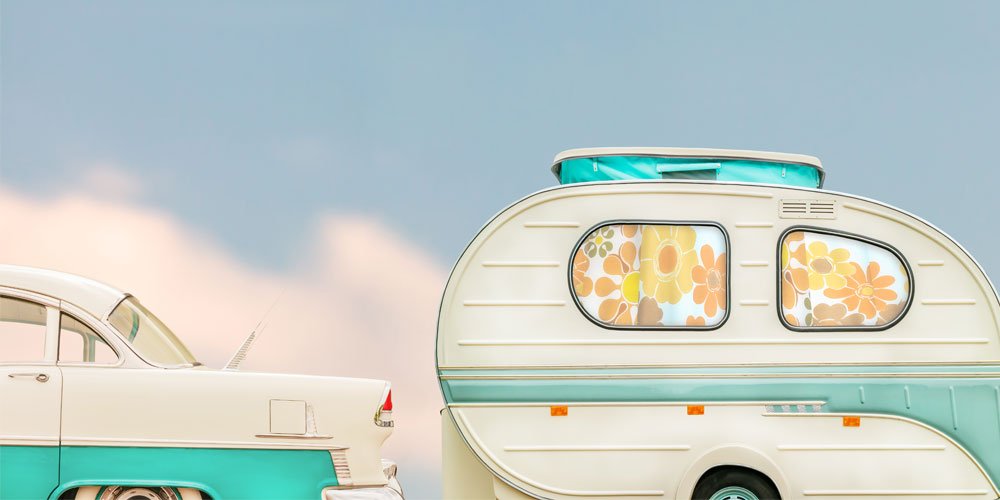 In 2020 Rene Neitz’s world turned upside down. Diagnosed with stage three breast cancer, the then-43-year-old underwent a lumpectomy, hormone treatment and intensive radiation. With the support of her loving husband Matt, their two children, and Mrs Neitz’s family and friends, she remained positive and was given the all-clear 12 months later.

To say the experience changed her outlook on life is an understatement.

“Nothing in life is guaranteed,” Mrs Neitz says. “If you’ve got stuff you want to do, and you are able to do it, just do it.”

This year the Coolum couple sold their home, quit their jobs, bought a caravan and told their adult children that they were hitting the road.

In two weeks they will start their adventure and spend four months travelling south through New South Wales, Victoria and South Australia before heading up the middle of the country through Alice Springs. They will arrive in the sleepy Queensland coastal town of Yeppoon – where they recently purchased a home – just in time to support their daughter as she gives birth to their first grandchild.

“The whole process for us has been a ‘we’ll do that and see what happens next’, and it’s all lined up. We’ve realised that it’s not worth stressing and being locked down into a job. Obviously people have to work. I worked my way through cancer. I had two weeks off through radiation, maybe a week after the surgery,” Mrs Neitz says.

“We just want to take a breather and take a couple of years. Luckily, we were in the position that if we sold our house we didn’t need to buy back into the same market… and we could be debt free. We would have been plugging away for another 20 years to pay the mortgage here on the Coast. We mightn’t be here in another 20 years. Nothing is a given.”

It’s a common thread among relative newcomers to the caravanning world. This ‘life is too short’ mentality, coupled with border closures and international travel difficulty, has resulted in a surge of popularity in the humble holiday.

According to the Caravan Industry Association of Australia’s (CIAA) 2021 State of Industry report, in the January to March quarter, one in three Australians took a caravan or camping trip.

It’s a thriving industry valued at around $23 billion. Ask anyone who has tried to get their hands on a caravan in the past six months and they share a similar story: it isn’t easy with second-hand vans snapped up within hours of hitting the market, and lengthy wait periods for a new buy.

As of 2020, there were more than 750,000 recreational vehicles registered on our roads with that number tipped to increase. Like many industries, the sector took a hit during the height of the COVID-19 pandemic. The State of Industry report highlights that compared to a record 14 million trips taken in 2019, that figure dropped to 10.6 million in December 2020.

Despite this, the industry has proven to be more resilient than most in the tourism category. Caravan park revenue still reached a whopping $1.78 billion across the nation. Queensland fared well retaining 24 per cent of the market share and recording the second strongest performance with revenue of $406 million.

Visit Sunshine Coast CEO Matt Stoeckel says while areas of the tourism industry have done it tough, the caravan sector has been a winner. “With more than 1600 caravan and camping sites across the Sunshine Coast we have long welcomed this market to the region, as it’s our diverse natural environment which make us such an appealing destination for these travellers. During the pandemic we indeed saw an increase in caravan and campers.

“We noticed that especially during the period where travel restrictions prevented interstate visitors from reaching us, we were supported by the loyal intrastate Queensland market, many of whom were taking a road trip or travelling by caravan
or campervan,” he says.

Now, as Australia exits from the throes of the pandemic, industry bodies say the industry will go from strength to strength. The CIAA’s Caravan Industry Consumer Sentiment Report February 2022 shows a high number of caravan and camping trips booked for the rest of the year, with 56 per cent of respondents actively planning their next trip. Almost 60 per cent of respondents have no plans to travel internationally.

And although the recent increase in fuel prices will impact drive tourism, the cost is reported to be significantly less than the
25 per cent forecasted airfare increase.

Cost was a major factor for Synda Turnbull and husband Mike when they invested in a caravan during 2021.

“We wanted to visit family in WA and the cost flying over there for five people was a lot,’’ Mrs Turnbull says. “My husband was looking at caravans anyway, so we crunched the numbers. It worked out cheaper to buy a caravan and drive it.

“Then, at the end of the trip we would have a caravan to sell. We thought, well if we are going to go, let’s go while the kids are at that good age.”

So, with three school-aged children, the Sunshine Coast family hit the road. They spent 12 weeks travelling in their pop-top van, driving down to New South Wales and on to South Australia where they spent time on a sheep station in Broken Hill. From there they continued straight across the Nullarbor towards Western Australia. When, on the way home, the family had the chance to experience snow in Jindabyne, they didn’t hesitate to alter their plans.

“We had three days of absolutely magical snow and skiing.

“I’ve done a lot of travel myself and I knew we were creating memories that could never be erased. We were able to open the kids’ eyes up to a whole raft of things they’d never experienced before.

“If you ask the kids what their favourite part of the trip is, they say all of it.

“We kept the caravan,” Mrs Turnbull adds. “We don’t go too far, but we are still having little adventures in our caravan.”

Short on time, but big on relaxation? Hitch up the caravan, head down the road and check out one of the region’s offerings. 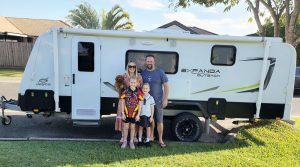 The most recent statistics from Australia’s caravan industry body reveals families with young children are the largest caravanning and camping demographic. The segment recorded 3.6 million trips – 35 per cent of total trips taken – in 2020. The family market also recorded the most amount of nights spent (13 million).

For mum of two Ebony Parke, investing in a caravan was a no-brainer. “We bought a camper trailer five years ago when we had a two-year-old and a four-year-old. I was never a camper, I didn’t grow up camping.

“For my husband Anthony growing up, that was what family holidays were. I had to negotiate what our family holidays would look like. With two young children and me not working full-time, our budget restraints cut into overseas holidays.”

Eighteen months later the Parkes invested in a Jayco Swan Pop Top, and two years after that they upgraded to an 18-foot Jayco Pop Top complete with bunk beds for the kids, air conditioning and bathroom facilities.

“Many people do the stepping stones. A camper trailer costs around $5000 to $10,000, the next step is around the $15,000 to $20,000 range, and then you ask, ‘are we really going to invest here?’ We chose to invest for our family. They are our holidays, whether it’s a long weekend or two weeks in Airlie, which we are planning in winter.”

The Parkes have spent many weekends discovering the regional area and alternate between holiday parks with all the mod-cons, and more natural environments such as Kenilworth Homestead.

“For now, while the kids are young this is the way forward. We are creating memories for our kids and they love it. We travel with different people, school friends, family friends. It’s a great experience.”

Mrs Parke’s tips for caravanning with children are simple: always have some shade, storage is a bonus, and when you find a location you like, rebook so you don’t miss out. As for sharing a confined space with the entire family, she says it isn’t an issue. “You don’t go camping to sit in your van the whole day. The only time you are all in there together is when you are sleeping and in the morning if it’s cool or frosty, we might have breakfast inside.

“We definitely have no regrets.”

97%  believe it allows children to learn about the environment.

73% of campers thought it should be part of the school curriculum.