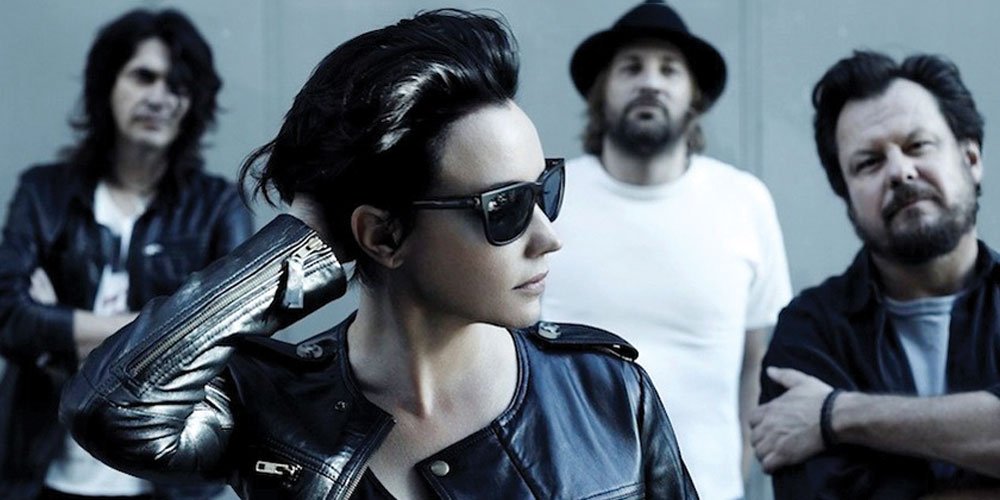 Every single Baby Animals gig is unique, which is a huge feat for a band that’s performed thousands of gigs since forming in 1989.

Guitarist Dave Leslie says they will often improvise on stage, “running on instinct and letting [the music] take us wherever it wants to go. It keeps us as well as our fans on their toes a little bit and while they often work, other times they fail spectacularly. We love that element of risk and it gives us a chance to end every night with something unique rather than the same stuff night after night.

“When we go on tour, the improv can become its own piece of music and just evolves. It becomes a song that writes itself on the fly and that’s an exciting way to end a gig.”

“The weather is always so beautiful and we get a chance to hang out with not only our fans, but other musos as well that we usually don’t get the chance to catch up with socially because everyone is so busy,” he says. “That festival is so well run and playing to a sea of smiling faces at a venue that is jam-packed with music lovers is always awesome.”

Ms DeMarchi and Mr Leslie have been creating music together for three decades and while there are bigger gaps between tours now, the recent release of their greatest hits album sparked the latest influx of touring, which Mr Leslie says he misses.

“There is an incredible dynamic with the band and whenever I sit in a room with Suze, I’m still knocked out by her talent when she starts to sing. She has such an amazing voice and when you are together all the time you can take it for granted,” he says.

“The time we have apart makes us miss each other and then when we jump back into being a band, it’s all good fun. I always feel blessed when we get a chance to play.”

There’s no doubt that Baby Animals classics like Rush You and One Word continue to have people singing at the top of their lungs. Mr Leslie says they will always be timeless for him.

“I’ve spoken with guys in other bands and they sometimes lament, ‘if I had I known I was going to spend the rest of my life paying this song…’ but that has never happened for me,” he says. “Every song has its own amazing elements as well as challenges and that means we have to bring our A game to every gig.”

The magic in the studio is also something Mr Leslie thrives on.

“There have been moments where we are recording and are listening back after putting a part down, and Suze has tears in her eyes. That’s when we know we are onto something special and those moments are worth all the hardship and all the hard stuff,” he says.

“We’re in writing mode at the moment, kissing a lot of frogs trying to find a handsome prince. We are sifting through and developing ideas. We’d like to do an album in the near future.”

Those who can’t wait for the latest album can get their Baby Animals fix at the Caloundra Music Festival. The band will perform at 6.45pm on October 6 at the Kings Beach Soul Stage. Tickets to the festival, which runs from October 4 to October 7, are available at caloundramusicfestival.com.

There are more than 70 bands joining the Baby Animals at the CMF, including Band of Frequencies, Bearfoot, Ben Lee, Conrad Sewell, Diesel, James Reyne, Kate Miller-Heidke, Missy Higgins, Regurgitator, The Superjesus, The Veronicas.

The Caloundra Music Festival is a family-friendly event. Here are the top five things to do with the kids at this year’s festival.