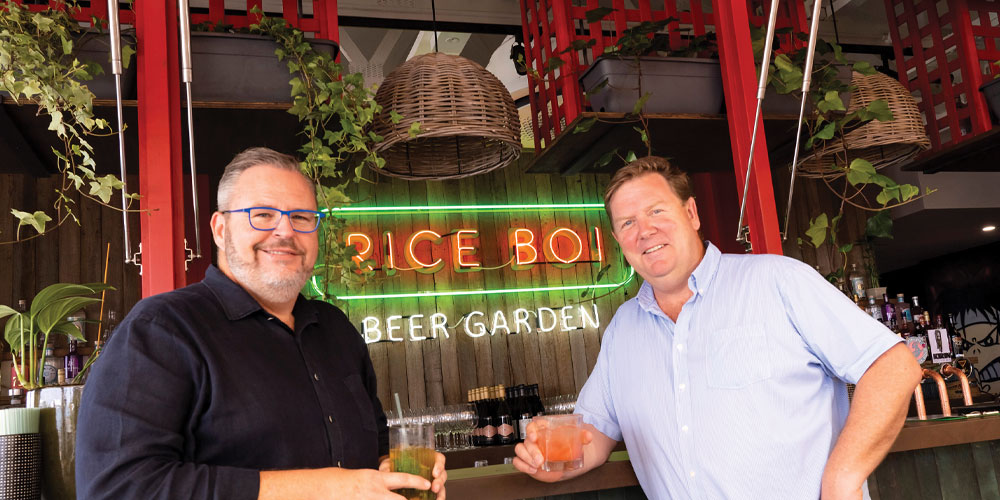 As The Wharf Mooloolaba nears its initial target of attracting one million people a year, the new Rice Boi beer garden has officially opened.

“Our initial goal when we opened was to create a great neighbourhood restaurant that locals loved,” Mr Kelly says. “I didn’t dream then that now we would be expanding to have a 400-seat restaurant. The Wharf is a great location and we’re really excited to expand so we can offer the riverside alfresco dining that is perfect for our region.”

The Wharf Mooloolaba co-owner Dirk Long says, “It has been almost three years since we started redeveloping the precinct and we have worked hard to create the perfect relaxed environment, as well as the right mix of restaurants, eateries, shops and activities, to attract locals and visitors alike.

“Numbers have been building steadily, particularly over the last 12 months, and we are now looking forward to our biggest summer season ever, which will take us to the million visitor a year mark.”

Mr Kelly says the Rice Boi beer garden will offer all the things that helped get the restaurant featured in the delicious. Top 100 Restaurants in Queensland list, in which it also took out the popular vote for Best Family Friendly restaurant.

“We will have the Rice Boi menu with more curries, more dumplings, more specials and there will also be eight beers on tap, including Kirin,” Mr Kelly says.

“There will be a great cocktail list as well as an Aperol spritz menu – all perfect for the relaxed alfresco dining we have added.”

“We have grown from a team of 18 two years ago to 65 now, so we are excited to open the beer garden and welcome even more people in.”

Mr Long says 2020 will be another huge year for the precinct as a whole, with the refurbishment and expansion of the Hog’s Breath building, the tower, the upstairs area and the opening of the Wharf Alley around Easter, which will include even more food offerings.

To stay up to date on everything happening at The Wharf Mooloolaba, check out wharfmooloolaba.com.au.

Continue Reading
You may also like...
Related Topics: The Wharf

Get sun smart
Take it outdoors this summer