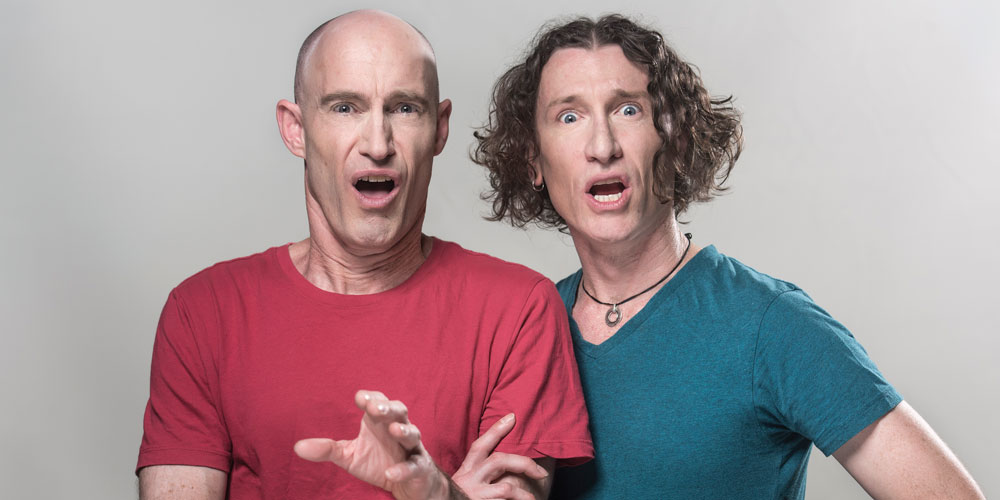 The audiences of Australian comedians can often be classified quiet easily. Carl Barron will have a room full of ocker Aussies, while Kitty Flanagan attracts the high-brow ABC-consuming audience.

But when you turn up to an Umbilical Brothers show, you will find generations of families from all backgrounds ready to experience the duo’s unique fusion of physical and vocal comedy that has taken them to stadiums supporting Robin Williams, brought comedy audiences into the Sydney Opera House and seen them named as two of Entertainment Weekly’s 100 Most Creative People In Entertainment.

This is the environment David Collins and Shane Dundas, affectionately known as the ‘Umbies’, have spent 28 years creating.

They have performed in 38 countries and spend most of their time abroad with their acclaimed stage shows, and now they are returning to the Sunshine Coast with one of their most beloved shows, SpeedMouse, as part of the NOOSA alive! festival.

Speaking to My Weekly Preview from Newcastle in the midst of creating their seventh stage show, Mr Collins says that although they created SpeedMouse 15 years ago, avid fans will be pleasantly surprised by how it has evolved, with new material and jokes added to keep it fresh for the duo and their fans alike.

Mr Collins says SpeedMouse is a live-action, fast-paced, rewind, slow-motion, frame-by-frame adventure where two men create the impossible out of a microphone and a physical ability. “We stand on an empty stage and the audience has to use their imagination to go on this journey with us. It is the only one of our shows that has a Sixth Sense ending and the second time you watch it, you pick more things up,” he says.

“As soon as we came up with it, we knew it was a special show. Don’t tell your friends if you’ve seen it before, ‘cause then you’d be a bit of a d*ck.”

The Umbilical Brothers have gained a fanatical toddler and college fan base with their television series The Upside Down Show, Disney’s The Book of Once Upon A Time, The Sideshow and Maisy.

They also work on solo projects when they appeal to them, which Mr Collins says has been the secret to their longevity.

“I recommend anyone in any kind of relationship, whether work or personal, get the hell away from each other once every month or so,” he says.

“I really like doing other stuff and after 28 years in the industry, it is great for our minds to have the break away to do something else and then when you come back, the jokes feel new. Doing stuff separately and stuff together helps the relationship and helps the performances.”

Mr Collins says they return to Australia only to create new content and their work in progress, tentatively named Green, is unlike anything they have attempted before, using green screens, live action animation and audience participation that embodies the best elements of live theatre, a platform he says will always be dear to his heart.

The Umbilical Brothers will perform at The J on July 26 at 7.30pm as part of the NOOSA alive! festival, which will bring world-class musicians, authors, dancers, artists, food events and more to Noosa for an amazing 10 days of arts and culture from July 19 to July 28.

The festival will open with a free event on July 19 at Laguna Lookout from 4.30pm.

As the sun sets over Noosa, the festival will be opened with a talk from Dr Eve Fesl, performances from the Gubbi Gubbi Dancers and more.

From 6.30pm celebrations return to The J Theatre for an hour of free entertainment with Tane Tokorangi with drinks on the deck to warm up for the evening’s headline event, The Modern Maori Quartet, which is a ticketed performance.

Visit noosaalive.com.au for a full festival program and to secure your tickets.

Liquid gastronomy
A feast fit for the royals