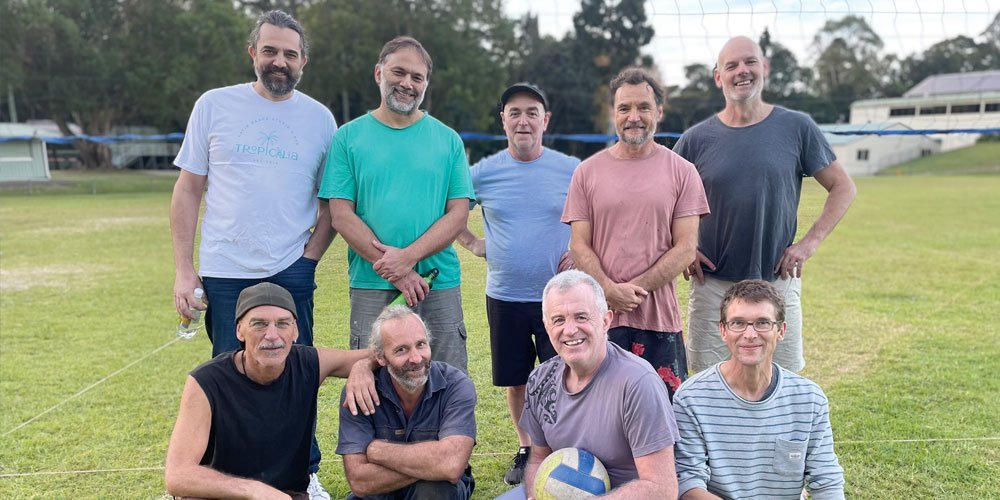 They come from all walks of life and when they meet every Wednesday at Maleny Showground, they are not IT professionals, dentists, musicians, artists, landcare workers or health workers. They’re just a bunch of blokes, keen to smash a ball over a net and let off some steam.

For more than two decades, a haphazard group of men has played a weekly game of social volleyball that has provided fun, exercise, stress relief, social connection and a sense of belonging.

Adrian Anderson is a UX designer and co-owner of popular Maleny cafe, Shotgun Espresso. He traces the roots of the game back to 1997 when he moved from Brisbane to permaculture community Crystal Waters and missed playing sport.

“I tracked down a ball and a volleyball net and we just started playing,” he says. “There was also a game going in Witta, but we moved to Maleny around 2000 and we’ve been playing there every Wednesday afternoon ever since.

“It was really just a bunch of people who missed playing sport that was fun and not super-competitive. It’s hilarious how connected to particular points we can be while the game is in play, but none of us remember the score afterwards.”

“The spirit of the game is ephemeral; it’s formless,” Mr Anderson says, tongue firmly in cheek. “It’s like saying what is chi? It’s the life force that binds us all.

“We don’t use indoor or beach volleyball rules. We have our own set of rules that is a combination of both.”

The teams are formed by creating an even mix of players with varying abilities and if someone new joins, they’ll be taken aside and shown a few basic skills before being let loose. Shoes are optional, no money changes hands and random campers at the showground often join in.

“It was very rough in the early days,” Mr Anderson says. “We were all over the place. Our skills were very ordinary. Occasionally, you’ll get a person who will be the worst person ever to play the game. We’ll go, what are we going to do about them? That was the case with Mikey. We had several conversations about what we were going to do about Mikey. He had no inbuilt coordination whatsoever. For seven years straight, at our end of year awards, he won the ‘most improved player’ award. Now, he’s one of the better players.”

Up to 20 players participate each week and Mr Anderson is keen to emphasise it’s a unisex game – although only a few women have joined in over the years.

For the men who’ve played together for more than 20 years, watching each other’s children grow from babies to adults, it has provided camaraderie and respite from daily life.

“It has been a really important structure in my life where I can laugh and banter,” Mr Anderson says. “Whatever your week has been like, it’s like, no worries, it’s Wednesday afternoon.

“These relationships I have with a number of these people only exist on the volleyball court. My entire relationship with them has just been playing games, like a little boy. It’s a different relationship I have than with people in other areas of my life. It’s all good, it’s all fun.”

Can you give 5?
The future is bright