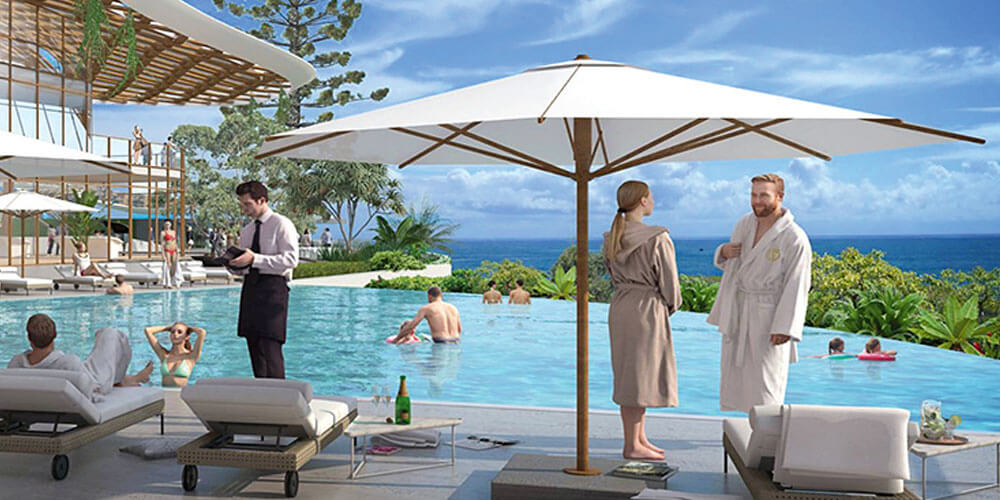 Could Buderim become the next tourism hotspot, matching the likes of Monaco, Cabo or Portofino?

Heidi Meyer and Kim Carroll believe it can.

Councillors Ted Hungerford and Tim Dwyer voted against the application, which includes 125 suites, three restaurants, a wellness day spa, conference and function facilities and basement parking for 177 vehicles across a four-hecatare site at 24–26 Box Street by 2025.

The council imposed 158 conditions on the development.

Originally, the application was due to be decided via delegated authority. However, deputy mayor Tim Dwyer called it up to the full council in October to ensure the project was fully considered.

“(This is) massively outside the town plan in a high-slip zone that has large excavations in the town of Buderim. I am worried about the precedent for future development on the Buderim escarpment,’’ he says.

Planning and Development councillor Christian Dickson says Badderam shows what is possible for the Buderim community and the wider Sunshine Coast.

“We talk about airports, we talk about job creation, and none of that’s going to happen unless we can get some development to support it. We often have people saying why are you having an international airport if you have no five-star accommodation and you know what? It’s a very good question,” he says.

“This is really a step in the right direction, this is a really unique, boutique development for Buderim. We shouldn’t be having five to 10-storey buildings in Buderim, it should be fitting in with the landscape.”

Cr Dickson says he has not, in his 12 years in the council, seen residents turn out en masse to support a development in their town and he credits this to Ms Meyer and Mr Carroll’s openness and transparency with local residents and the wider Coast community.

Celebrating the news, Ms Meyer says she welcomes the conditions the council has placed on the project.

“We actually feel good about (the conditions) because it keeps everyone on the straight and narrow and it keeps them to a song sheet,” she says. “Those conditions are elements that we are really proud and happy to support.

“Our aim has always been to create something the community is proud of, with an ethos of creating environmental consciousness in the region and getting the community to all start thinking sustainably.”

The process of securing an operator will now begin and the council has given a two-year deadline for this to be completed.

Ms Meyer says it is the strong focus on sustainability and zero waste management through its day-to-day operations that will make Badderam, which will be located just a few hundred metres from the Buderim village, much more than simply a green-rated resort.

“This is not just a green building– we want to secure the right operator that will adhere to that strong environmental ethos in the day-to-day operations,” she says.