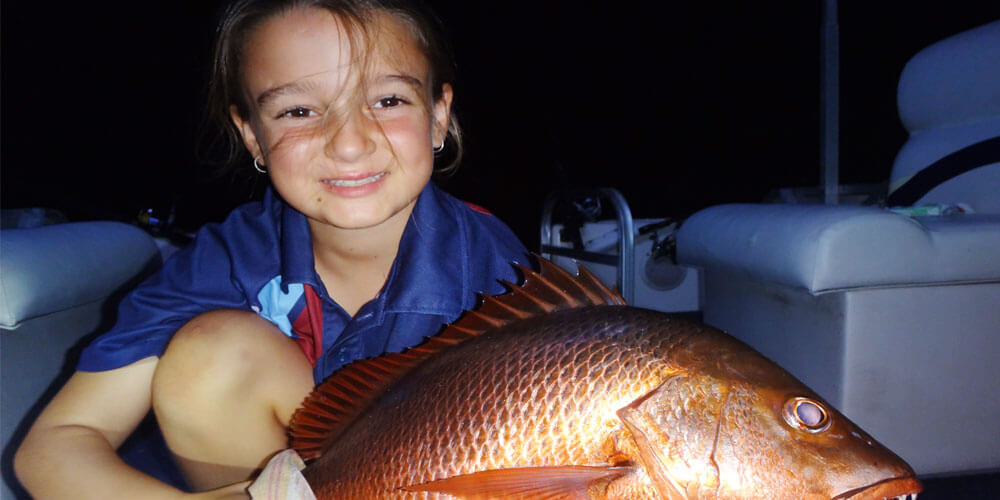 “My technique is better than Dad’s,” Hailey Paxevanos declares as her nimble fingers tie a size eight hook onto the end of a fishing line and she casts into the azure blue waters of Pumicestone Passage.

Sure enough, her line has barely had a chance to hit the sandy bottom before the tell-tale jerking of her rod indicates there is a fish on the other end and she reels in a modest-sized bream.

When you find out her dad is none other than Fishing Australia’s Rob Paxevanos, you can see why the Pelican Waters nine-year-old is so confident with anything related to fishing.

In fact, Hailey caught her first fish when she was 18 months old. She was strapped into a pram and reeled in a fish while filming an episode of her dad’s popular TV series in Cairns.

“She used to crawl into my office and we’d find her winding my reels well before she could walk,” Mr Paxevanos recalls with a smile.

Hailey has gone on to catch an impressive 63 species of fish and declares that once she gets to 100, she will get a prize from her father.

She has many tales of ones that got away, but also some pretty impressive stories about that ones that didn’t.

“I caught a huge flathead off the beach when we were living in Bateman’s Bay in New South Wales one time when Dad was away.

“I was fishing on the beach near my house and I thought I was getting snagged, so I tried to get the line back,” she explains.

“The reel was just going shzzzzzzzz and it took me a long time to reel it in. It was a 62-centimetre flathead and Mum came down to get a few photos to send to Dad.

“I had to release it because when flatheads reach 50 centimetres, they turn into females and you are not allowed to take them because they are protected.”

Being a little encyclopedia of fishing facts, tips and tricks, Hailey has become the first child in Australia to write a fishing book just for kids.

But Kids Fishing has become a handy tool for angling enthusiasts of all ages because of the way it uses “kids speak” to simplify fishing safety. It also shows how to tie knots, offers tricks to help you catch more fish, and shows how to take care of the environment and handle fish in a safe manner.

“Lots of my friends ask me what to do when they go fishing, so I thought I would put all of my ideas together in a book,” says Hailey.

“It took about two months to write. The hardest thing was putting all of my ideas together – I had so many.

“The most common thing people do wrong is not using the right hook or bait.

“They think a big hook is going to catch more fish, or bigger fish, but it’s actually harder for fish to get hooked on larger-sized hooks.

“The best size for the three main fish – bream, flathead and whiting – is a size eight.”

Hailey says she is constantly learning every time she casts a line and that is what has kept her hooked on the sport.

She has an impressive ‘pool room’ filled with trophies from fishing competitions through the Caloundra Power Boat Club and the Pelican Waters Tavern and it’s quite common to see her fishing along Pumicestone Passage immediately after school, still in her uniform.

“Whenever I get to fish, it’s so exciting and one day, I want to catch a metre-long flathead,” she says.

When asked what message she would like to give My Weekly Preview readers, Hailey doesn’t hesitate.

“Have fun and make sure you take your rubbish home with you,” she says.

“One time we went somewhere and there was heaps of rubbish there and we picked it up and filled up two whole plastic bags full of rubbish.

“The fish eat it and then we eat the fish, so it’s important to recycle and pick up stuff once you use it.”

You can buy a copy of Kids Fishing for $12.99 including postage from fishingaustralia.tv/shop.

Reawakening a Mooloolaba destination
A glimpse at a driverless future