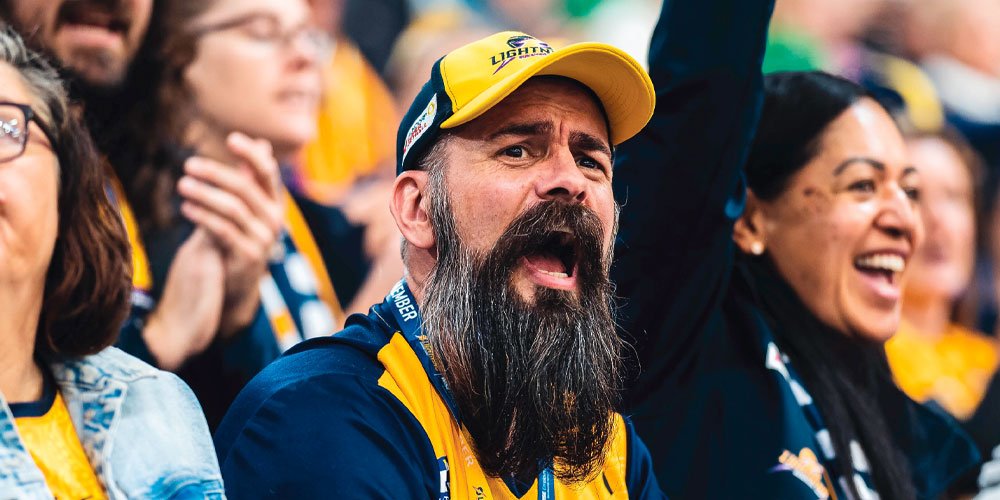 A lovable Sunshine Coast netball fan recognisable for his booming voice and impressive beard is doing his part to help young families living with a cancer diagnosis.

After years of growing his beard, Jason McIntyre recently shaved it off to raise money for Australian charity Mummy’s Wish, which has been supporting Sunshine Coast Lightning assistant coach Christine Voge after a cancer diagnosis last year.

Mummy’s Wish provides practical support for mothers diagnosed with cancer who have children aged under 13 years.

The charity has helped Ms Voge explain her lymphoma diagnosis and extended hospital stays to her two primary school-aged children. “One of the biggest challenges has been explaining to my young sons what cancer is and why is mum sick and in hospital for so long,” she says.

“Mummy’s Wish supplied me with resources to start discussion and read information in an age-appropriate format.

“Additionally, with the burden of long stays in hospital and added COVID-19 restrictions, the organisation sent me two lovely teddy bears for my sons where I could record a personalised voice message that plays with a hug of the teddy.

Ms Voge says the charity has helped her realise how much extra support patients and families need during treatment and adapting to life with cancer.

Mummy’s Wish has supported more than 5000 families since 2007 and is currently able to support just one in five families due to limited funds.

The charity’s goal is to deliver its service to every mum who receives a cancer diagnosis while caring for young children by 2025.

Wanting to help the charity that is helping one of Lightning’s own, Mr McIntyre, who was named Lightning’s inaugural Fan of the Year, didn’t hesitate to help after a bit of a push from his wife Vikki.

“Let’s be clear, my wife wants my beard to go and up until now, I did not entirely share her view,” he says. “I have grown and nurtured this beard for years and have been shocked, and impressed, at how the beard has become a part of my identity.

“But when Vikki explained the cause, I didn’t hesitate.

“Mummy’s Wish do such great things supporting mothers of young children, including supporting Chris [who is] such an important part of the Lightning family, through what continues to be a challenging time.”

Mr McIntyre shaved the beard off at a Lightning community event in Cotton Tree on September 1 where members and fans had to opportunity to celebrate the 2021 netball season.

Ms Voge is grateful for the ongoing love and support from the Lightning family and wider community, and Mr McIntyre for his fundraising efforts.

“The ongoing support from Sunshine Coast Lightning with practical and emotional support has been unbelievable,” she says. “This fundraising opportunity will be such a great contribution to Mummy’s Wish to help the significant numbers of mums with cancer.”