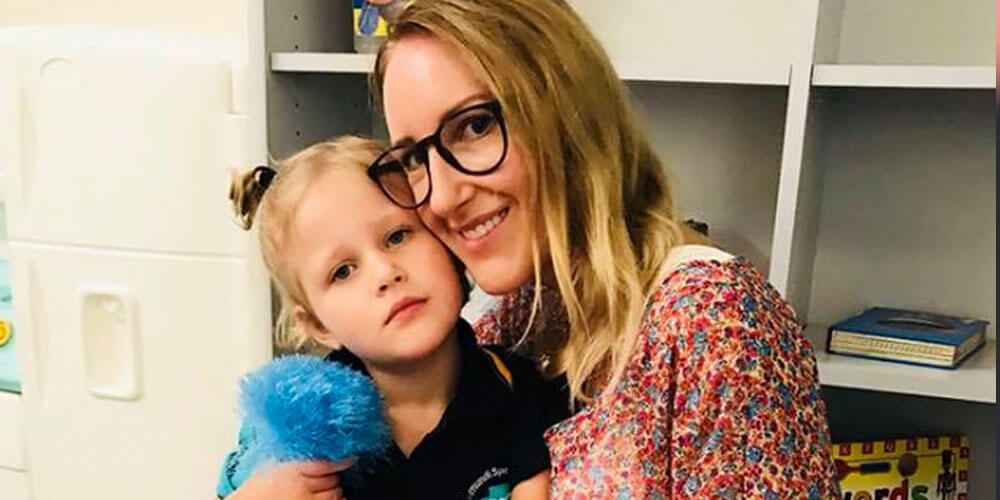 She also loves the feeling of hair tickling her nose, and has the most magnetic eyes you’ve seen and an incredibly infectious smile.

But her angelic looks belie an incredible strength that has seen her overcome many odds in her short lifetime.

She is one of just 200 people in the world who suffers from an extremely rare genetic disorder, Aicardi Syndrome, which means she has an absence of the corpus callosum (the middle part of the brain which allows left and right sides of the brain to communicate), severe brain damage on both hemispheres, suffers from daily seizures and has lesions on her retinas resulting in vision impairment.

Mum Sally White says Zahlia was diagnosed at 12 weeks of age and doctors said her precious daughter would probably not survive to see her first birthday, let alone be able to recognise anyone or walk.

But Zahlia has done all of that and more.

“I never thought she would make it, so it was incredibly emotional to reach this point with her and then I took a breath and realised what we have gone through over the past five years, the constant hospital visits, being sleep deprived, the trauma of seeing your child not breathing and turn blue  – the pain of that doesn’t go away,” she says.

“Some days you can cope with it and other days you can’t. It’s a constant emotional rollercoaster and on top of seizures, she frequently gets pneumonia and has serve allergies to certain types of food, so I make it all from scratch.

“Zahlia has five types of seizures, but the most common happen at night during sleep and watching her go through seizures, never knowing whether or not she is going to pull through the next one… I adore this child so much and she is constantly battling, so when she has another birthday I am so grateful but also not sure how we will find the strength to get through another year, or five.”

The Sunshine Coast community has rallied behind the Mooloolah Valley single mum and her daughter to donate materials, labour and equipment to create a dream backyard in which the pair can spend quality time enjoying the great outdoors together without the need for lengthy and physically draining visits to local parks.

After her husband left, Ms White withdrew her superannuation in 2016 to create a beautiful haven for Zahlia, who adores being outside in nature. But a dishonest tradesperson left her out of pocket with additional landscaping problems that didn’t exist before her investment.

It was during an inspection by the Queensland Building and Construction Commission that she met iLandscape owner Jason Kay, who vowed to help her bring her vision for Zahlia to life.

Ms White then connected with Mix FM’s Todd and Sami at an event she attended as a representative for the Make-A-Wish foundation and the dynamic duo jumped on board to bolster Mr Kay’s efforts.

Last week, Mr Kay was on air with Todd and Sami every afternoon, collecting the details of generous Sunshine Coast residents and business owners who jumped on board the project, and work began on Monday to bring it all to life.

The final working bee and big reveal will happen on October 27.

Ms White says at first she was uncomfortable asking for help because she is so used to just focusing on getting through each day with Zahlia without asking for assistance. But now she is in awe of the generosity of the community and cannot believe the dream garden she wanted for her daughter will become a reality.

Ms White says taking Zahlia out and having to endure the judgement of others as her non-verbal daughter shrieks uncontrollably with delight and does things that “aren’t socially acceptable”, has made their weekly visits to Happy Valley, one of Zahlia’s favourite places, harder.

“I’d like people to try and be kind to those they don’t know. Try not to give us those looks that say, ‘why is your child screaming at that age?’ or giving me your opinions about why I shouldn’t be parking in the disabled car parking space,” she says.

“It’s tough enough to live a life like this without having people judging you because they feel something is not okay. My daughter screams because she has brain damage and that is how she communicates that she is happy.

“There have been times where I have told people this after they’ve asked me to quieten her down and instead of showing understanding, they walk away in disgust.

“Please, be more considerate of people with disabilities and smile rather than frown.”

While the community has rallied together to transform Ms White and Zahlia’s backyard, they have ongoing medical, therapy and medication costs to manage. If you can help, please donate to theboardmeeting.org.au/donate-now.

Survivors in focus
Men – we need to talk