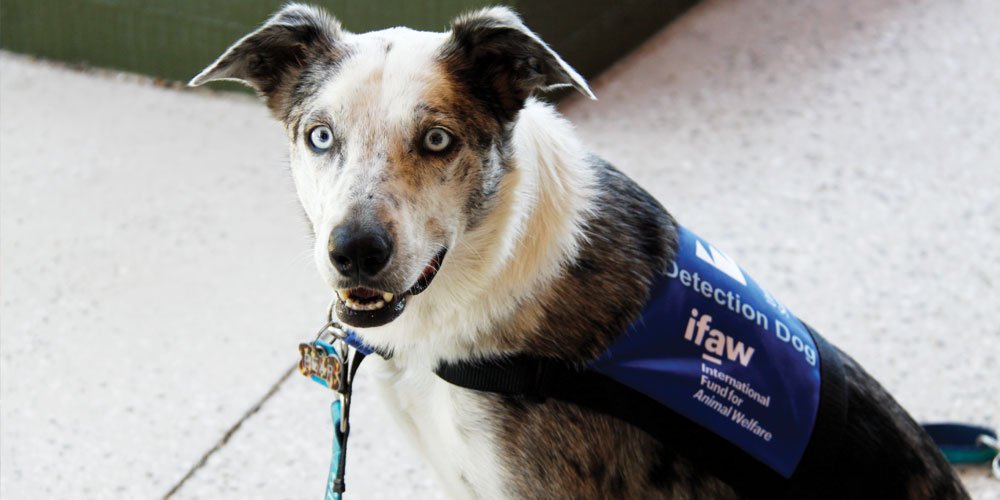 As the bushfire crisis continues, a little ray of sunshine has been working to offer a glimmer of hope for Australia’s devastated wildlife. Bear, the koala detection dog who first made worldwide headlines in November, has been working with his handlers from the University of the Sunshine Coast to find injured and displaced koalas in fire affected areas in Queensland and interstate.

Bear is one of the detection dogs trained by the University of the Sunshine Coast’s Detection Dogs for Conservation program, launched in 2015, and is sponsored by the International Fund for Animal Welfare (IFAW).

“Working in challenging conditions, Bear and the team have been into a series of fire grounds,” says Rebecca Keeble, IFAW regional director, Oceania. “Because Bear’s sense of smell is 10,000 times stronger than that of humans, Bear has been able to locate both signs of life in the form of fresh scat, koala scratches on trees and a koala. In some instances however, there has been no sign of life – which is devastating. We are very proud of Bear and he is on standby for further deployments.”

The task of locating and treating injured wildlife is becoming increasingly challenging, particularly with injured koalas, who can survive for weeks high up in the treetops of fire-ravaged areas, where they are difficult for the human eye to spot. That’s where Bear comes in.

A beautiful dog with piercing blue eyes and lots of energy, he has worked with the founders of USC’s Detection Dogs for Conservation unit, Dr Celine Frere and Dr Romane Cristescu, for the past four years.

“One of the difficulties with koalas is finding them, so we thought about training a dog that could help us find koalas,” says Dr Frere. “He was a year old when he came to USC. He came from an animal rescue group on the Gold Coast. He was abandoned because he was too high energy. He had an incredible amount of anxiety and compulsive behaviours. He didn’t really care much about human’s attention, he was just like, I want to play, play, play. People obviously thought he was a bit too much.

“He came into our lives and he was appallingly behaved, just extremely anxious. It took us two years of heavy training and rehabilitation to get him to a point where he was pleasant to be around.”

Since the New South Wales and Victorian bushfires, other koala detection dogs have begun to make headlines, but Bear was the one who captured hearts around the world.

“Initially the story of the bushfires and the fact that we knew critical koala habitat was being impacted grabbed attention,” Dr Frere says. “We predicted a high number of koalas would probably be killed by that. That’s what attracted the media. There were pictures and footage of Bear with lovely red boots – that’s what Tom Hanks and Leonardo DiCaprio picked up on. With pictures on Twitter and Facebook and Instagram, people were saying look at this dog at the forefront of bushfires. That story went everywhere – Europe, the UK, Asia and the US.”

Bear is a border collie-koolie cross with the right temperament for this sort of work.

“We work with animal rescue groups and hospitals and try to get koala fur and all the scent that embodies a koala – its fur, scent around the genitals, fresh scats,” says Dr Frere. “We work with some zoos where we can train him on live koalas. We made sure he doesn’t know what a koala looks like because we don’t want him to have any prey drive. He’s not searching for the animal in the tree, he’s using his nose to pinpoint the scent. He is play driven and works for a tennis ball. We show him the tennis ball, he has his jacket and red socks to protect his feet on and he knows he’s going to be working. Only when the scent can be confirmed does he get rewarded.

“I think he acts as an intermediary between the side that’s horrible about the bushfires and the side that provides hope. He’s obviously extremely attractive with his blue eyes – he mesmerises people. I think he provides a message of hope. In the context of climate change, that’s really important.

On a roll
How to lend a hand