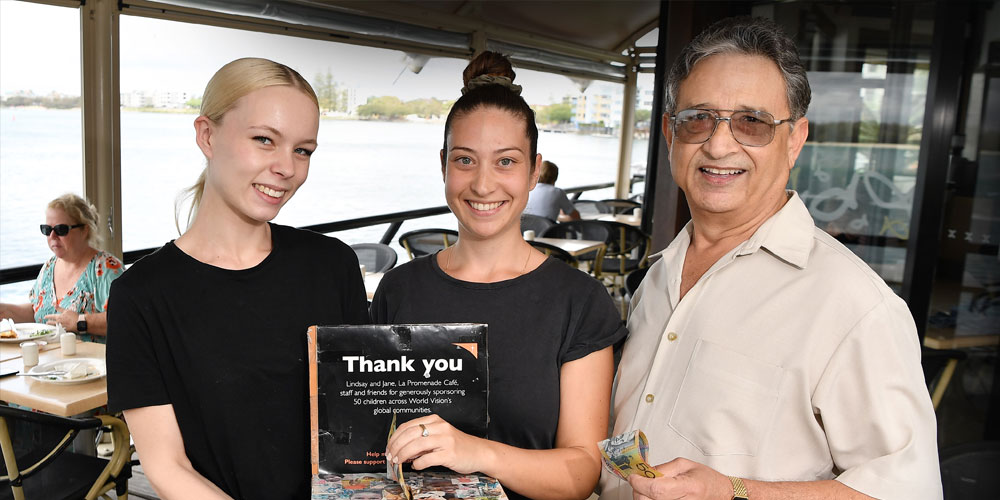 A popular waterfront cafe in Caloundra is making a world of difference to the lives of vulnerable children around the globe, clocking up a heart-warming number of child sponsorships thanks to the generosity of customers and staff.

Lindsay Ross-Gilder and his wife Jane have owned La Promenade Cafe at Bulcock Beach since 2009 and in that time have advocated for helping those in need. They recently notched up 50 sponsored children through World Vision.

This, as well as a mammoth $500,000 worth of donations over the years, was made possible with donations in the cafe’s tip jar, which the Ross-Gilders then match from their own pocket. “That’s been our number one priority – to help the less fortunate children,” Mr Ross-Gilder says.

“The customers of ours who come day in and day out, with their generosity they spend their money with us and in turn we are able to spend money with World Vision and the other charities we help as well.

“My staff and the management are very eager to do what we do and without their help we wouldn’t be anywhere. All the tips that we collect … go into the funding for their children. We make up the rest from what we put in from our pockets.”

La Promenade has raised more than half a million dollars for various charities over the past 12 years, including World Vision, The Fred Hollows Foundation, Mercy Ships and Catholic Mission.

Mr Ross-Gilder’s yearning to help began when he was working in the airline industry. Visiting vulnerable communities and orphanages in India, Zimbabwe and Thailand, he gained first-hand experience of poverty. “I saw the way things are, and the way things should be – that’s why I want to keep that circle of giving alive,” he says.

“A lot of time around the world in third-world countries, people can’t even get a clean drink of water. When I see water being wasted down the sink, straight away I think of these people in other countries.”

The 50 sponsored children are spread across 13 countries in Africa and Asia.

“There’s not a corner of the world where the past year and half hasn’t been tough,” he says. “But while it’s hard here, I know it’s even harder in countries that don’t have the health systems or infrastructure that we are lucky enough to have here.

“Lockdowns have led to huge loss of income, long-term school closures, increased child labour, early marriage and, in too many cases, severe hunger.

“A lot of these people don’t even have their COVID shots. So that’s going to be another problem.”

Mr Ross-Gilder hopes other businesses will start a similar project. “To everyone in the region, I wish there were other people who would come on board and do what we do.

“It doesn’t matter if it’s one child or 10 or 50, somebody is getting something from it and that’s what we want to see. If we could all get involved and give a little bit from here and a little bit from there, it would make a wonderful difference.”

Sponsoring a child for $48 per month can help provide education, safe drinking water, food and agriculture, and health services, and assist them generate an income.

La Promenade Cafe is at 4 Tay Avenue, Caloundra, open daily from 6am to 3pm.

Saving our cinemas
Our jobs of the future