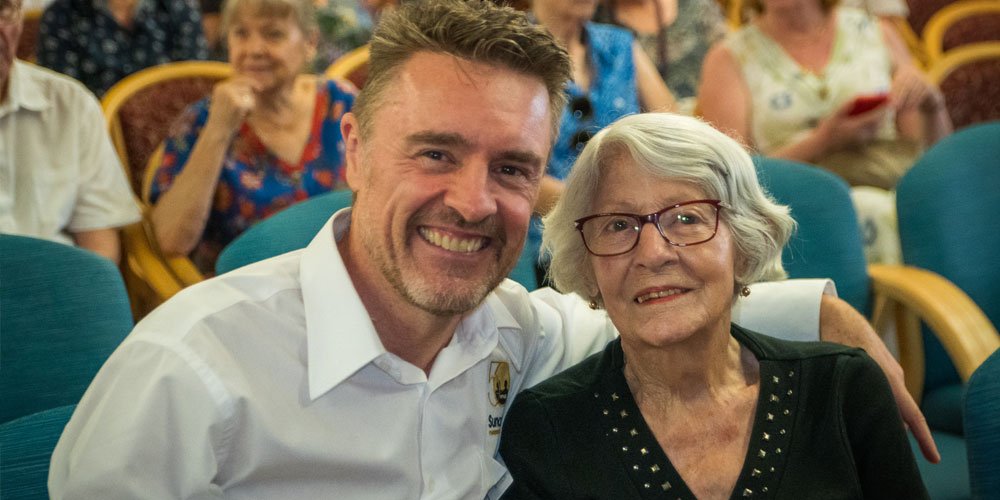 As long as she can remember, Suncare Community Services has been a part of June Conolly’s life, which made the launch of its 50-year commemorative coffee table book all the more special.

From humble beginnings in 1970, Suncare has evolved from a Meals on Wheels Maroochydore service to a not-for-profit organisation with more than 350 employees and 3000 customers.

This history has been captured in the celebration book, which also shares the life stories of several Suncare customers, with Ms Conolly proudly making a cameo.

“It has been an honour to have watched Suncare grow over the years to the organisation it is today. It was an honour to be featured in the coffee table book; to share some of my key achievements and my fondest memories,” she says.

For more than 45 years, Ms Conolly generously volunteered her time, cooking, packing and delivering meals for those in need. She served as president and treasurer, and was made an honorary life member in 1994. At age 82, Ms Conolly retired from volunteering and was officially appointed as Suncare’s patron in 2012.

Mr Mason says, “It was a great privilege to have our patron June Conolly OAM attend the celebration. Her dedication and significant commitment set the foundation for how Suncare operates today, and she has touched the lives of thousands of customers and their carers.”

He says 2020 marks an important milestone for Suncare. “For 50 years, Suncare’s staff and volunteers have strived to improve the lives of members of our local community, in particular elderly members, and I am proud to be part of this rich history.

“Suncare has grown from a small group of volunteers delivering Meals on Wheels across Maroochydore and Buderim, to offering a range of home-care services aimed at assisting people to live independently in their homes. Our services now support people from Rockhampton to the Gold Coast.”

What hasn’t changed is Suncare’s vision of “making people’s lives better”, which is the driving force of how it’s operated today.

“Serving the changing needs of the Sunshine Coast community and helping people to live independently at home are central to Suncare’s development,” Mr Mason says. “We listen to our community members and advocate for them at every level of government to ensure that their voice is heard. In particular we have focused on personalised home-care solutions that support our customers to live at home, because this is what they have told us is important to them.”

This is exactly what Suncare has done for Buderim couple Keith and Daphne McDonald, who also feature in the book. The McDonalds operated the antique shop on the corner of Main Street and Gloucester Road in Buderim. Mr McDonald still runs the business, now online, working up to 40 hours a week.

Today, they use Suncare’s in-home assistance, which allows Mrs McDonald to receive help getting ready for the day. This enables him to continue working with his wife by his side – just as he has since 1972.

Another significant individual in Suncare’s early days was Sir Raphael West Cilento, who served as patron from 1971 to 1985. A notable Australian medical practitioner and public servant, Sir Raphael was recognised for his contribution to public service and tropical medicine with a knighthood from King George V in 1935. In 1920, Sir Raphael married Phyllis McGlew, a fellow student who became a physician. The Cilento family owned property in Caloundra and Mooloolaba for many years. In 1971, he became the first patron of the Central Sunshine Coast Committee on the Ageing, the name which preceded Suncare Community Services.

Are you sun safe?
Creating a safe space