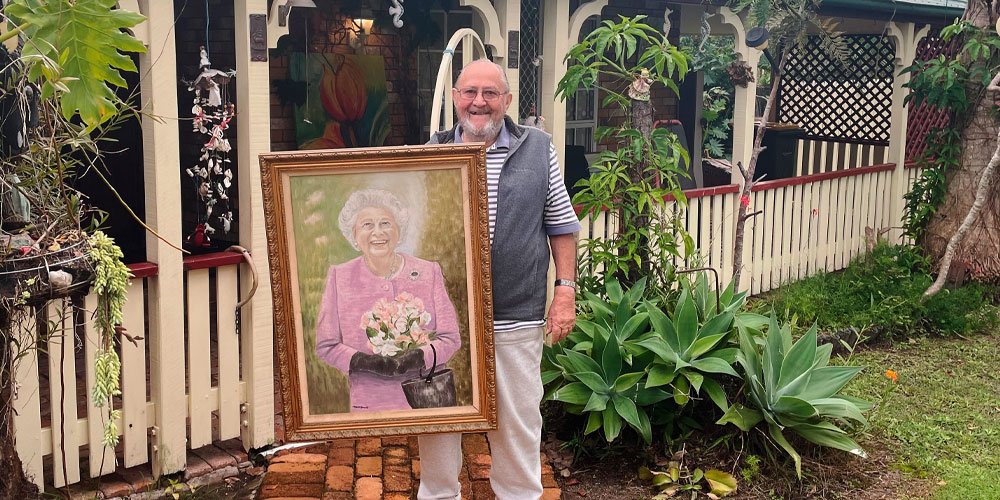 A former printer with a passion for drawing has an impressive collection of art, decades in the making.

Maroochydore’s Max McDonald fell in love with art after a family tragedy led him to become the first person in Australia to colour a picture for a newspaper editorial.

At 88 years of age, Mr McDonald has painted everything from the sheep farm he lived on to Queen Elizabeth II, the Dalai Lama and Muhammad Ali.

Mr McDonald says his love of artwork came after his father was tragically gassed during World War I. Charity organisation Legacy stepped in to help the family pay for schooling, and also helped Mr McDonald secure work with a printer where he began printing for The Australasian Post, Your Garden, Home Beautiful and other commercial work.

“I was the first person in Australia to colour a picture for a newspaper editorial,” he says. “My job after being taught to colour pictures for print, by hand, was to correct each negative and positive picture with a small brush.

“We would then print the yellow, then the red, then the blue and finally the black.

“We would do this one at a time. Nothing like today’s automatic colour printers,” he adds.

He says during his career he met three Swiss artists who taught him about reproductive art, a process that involves measuring an image out for repurposing.

“They were wonderful artists; I admired their work,” he says. “They also taught me how to paint and draw, and introduced me to the European style of art.”

It was when he left the magazine industry and moved to a 1138-hectare sheep farm in 1968 that he began his collection.

Having printed famous individuals from throughout history, Mr McDonald says he loves how art connects him with time. “I think what I love about painting
is it’s like a snapshot of the past. I can remember everything I did on the day that I work on a painting.

“It’s like a photograph for me; it brings me a lot of self-fulfilment.

“To see the time and what I have worked on come to life, I get a feeling of satisfaction when I look at the paintings.

“I’m inspired by the challenge too. If I see something, I do it, because I believe I have the skill.”

Mr McDonald says it can take up to two weeks to complete some works, especially as he measures everything out first with a pencil sketch.

“Art reproduction takes me the longest time. I have to draft it out. I can’t just go ahead and draw it because it has to be exact – I have to be exact.

“I can take a tiny little photo and do a rough measure for repurposing. I use my background of study from architectural drawing to help me figure out rough dimensions.”

As he edges close to 90, Mr McDonald is hoping to share his work with the wider community. Anyone interested in seeing his collection can email maxmcdonald 1968@gmail.com.

Continue Reading
You may also like...
Related Topics: artist

Expo blooms to life
Festival highlights on the horizon