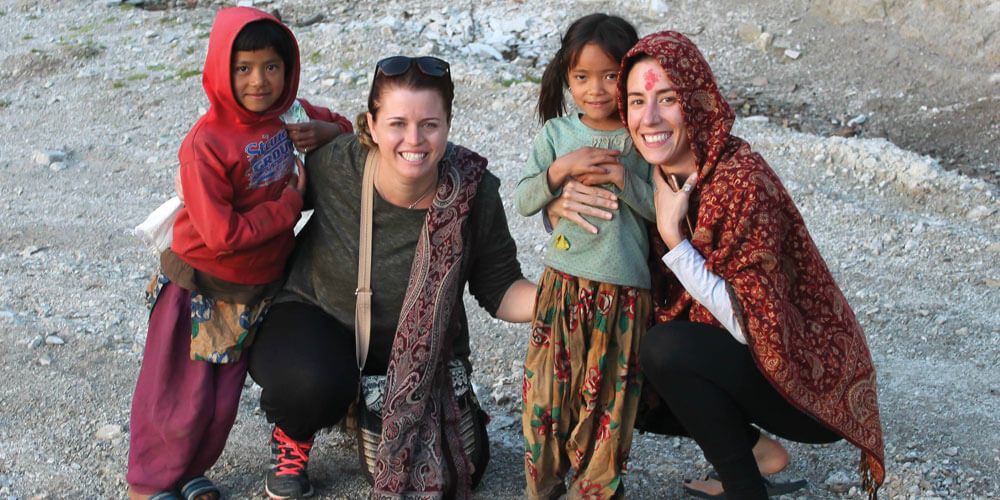 Megan Limpus says she always knew she was put on Earth for a reason and now she knows what it is. The certified health coach from Caloundra is part of an organisation called Days for Girls, which sews reusable cloth pads for millions of women and girls around the world who have to sit in tents or huts while they are menstruating, thereby missing school or work every month and putting their health at risk.

Mrs Limpus runs Blooming Healthy Studio in Caloundra, a wellness and creative space where she gathers groups of women together to sew the kits, among other activities. In May, she took her first trip to Nepal with her friend Sharon, delivering 95 Days for Girls Kits – which include waterproof underwear shields, absorbent liners, ziplock plastic bags, a washcloth, a bar of soap and two pairs of underwear. The liners are made with culturally appropriate fabric and bright colours so they can be hung on a washing line and look like a regular washcloth.

“We were there for 10 days and it was life-changing,” Mrs Limpus says. “We stayed at this incredible school and blended in with their culture. To think these very young ladies have absolutely no idea what’s going on with their bodies. It was overwhelming. It’s totally taboo to talk about it. They get told when they bleed to go into this little hut and sit there. Women even die in these huts because of the condition of them. They don’t wear underpants and we give them out, which deters men from raping them.”

Mrs Limpus says well-meaning charities often donate disposable pads and tampons to people in developing countries, however tampons are not culturally acceptable and if there’s no waste removal, used pads lay in the streets and people try to re-use them.

“Some women walked four hours because they heard they could get a kit from us,” says Mrs Limpus. “They use cow dung, which they turn into a patty pad to hold the blood and put it in the shorts they wear. Or they just sit on a piece of cardboard and bleed onto that. In a lot of countries they use rolled up material, which is very uncomfortable.”

Mrs Limpus took charts to explain the menstrual cycle to the girls and women.

“They were curious and had such joy in the way they looked at us,” she says. “We were teaching them something so new and they wanted to know more. We handed them the packs and got one of the girls to put the underpants on. Just the giggles – it’s so foreign to them. It’s something that will never leave my heart; their faces were so joyful.”

Mrs Limpus travelled to Nepal with Choice Humanitarian and funded the trip herself. “It cost me $2500 for the 10-day experience and I’d pay that each week if I could. My big passion is to take more women and families over with Choice, because it was such an amazing experience.”

Mrs Limpus and her friend Sharon began their Days for Girls group last year after visiting a chapter in Brisbane, where they were asked to demonstrate their sewing skills. They then had to send a sample of the full kit to Days for Girls so the facilitators could check it met the high standards.

“Everything is donated,” she says. “I’m blown away with the amount of people who can’t sew or don’t live near us who send donations so we can buy material. We’ve costed that it’s about $15 in materials to make the kit. People who aren’t skilful at sewing might bring back the little soaps if they stay at a hotel, because they are the size we need.”

Mrs Limpus says there are many retired people on the Coast who collect material from Blooming Healthy Studio, take it away and deliver completed kits to the studio. She runs days where groups of women work together to assemble the kits and they were able to send 115 kits to PNG recently.

While Mrs Limpus encourages people to become involved, she says nothing compares to delivering the kits in person, and she plans to do many more trips. “It’s great to sit here and sew the kits in Australia, but it’s not until you see the joy and relief on the women’s faces that you know why you’re doing it. To realise what one kit can do for somebody’s life is pretty darn cool and I love it.”

Continue Reading
You may also like...
Related Topics: Charity, donate