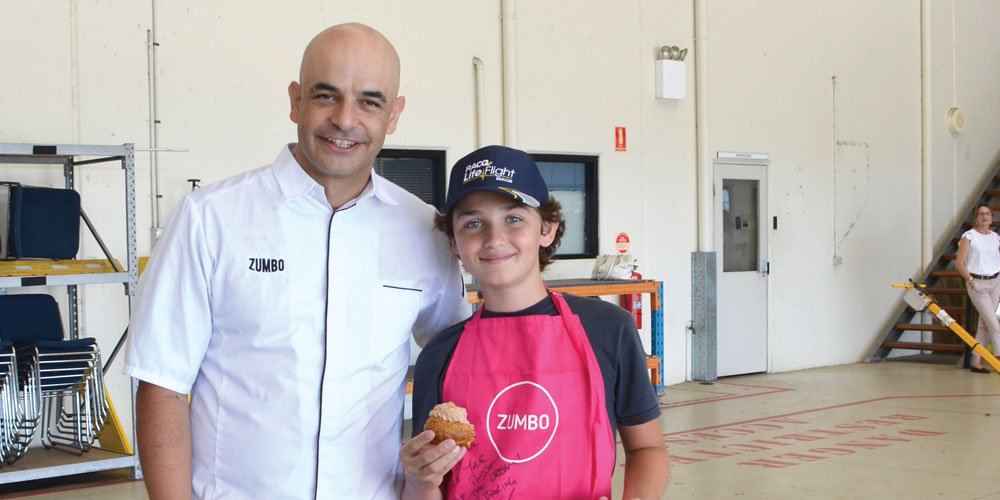 It’s not every day that Australian dessert legend Adriano Zumbo gets told his macarons are better than those on offer at McDonalds, but the reality TV sensation was happy to accept the compliment from 13-year-old Connor Creagh.

Connor made headlines when he was crushed by a tree that suddenly sprang back into place after it fell in a severe storm in Coolabunia, in the South Burnett, last year.

He was playing under the root ball of the tree, which was laying flat on the ground after being toppled in a storm the previous day. In a phenomenon no one can explain, the tree suddenly righted itself, trapping Connor underneath from the chest down.

When he told RACQ LifeFlight Rescue senior fundraising coordinator Mandy Hentschel of his desire to meet his idol, who has inspired many baking creations since his return home, he had no idea Ms Hentschel would set about making his dream a reality.

Last week, Connor arrived at the Sunshine Coast LifeFlight hangar expecting to “do something with a helicopter” and got an incredible shock when he found Mr Zumbo sitting in the front seat of the helicopter.

Mr Zumbo says he was humbled to hear how his show has had such a profound impact on someone.

“It is very touching and the last thing you expect to hear,” he says.

“It was amazing to meet him. He’s funny and was full of good quotes and he enjoys cooking. He told me about some of the desserts he’s created and he’s doing pretty cool stuff already.

“Oh, and I was glad to hear that my macarons are better than those at Maccas… that was a gold moment. It’s priceless.”