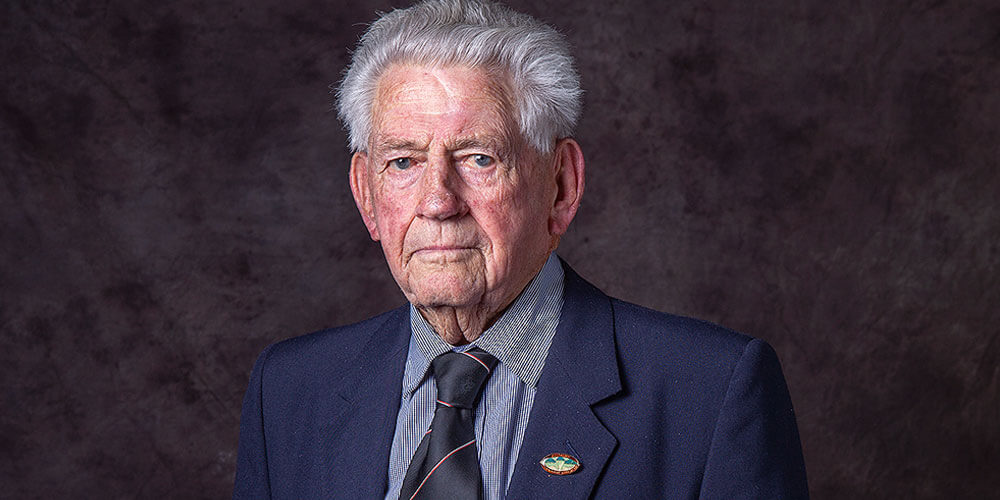 This year will mark the 72nd Anzac Day since Little Mountain veteran Frank Boyce’s military service came to an end.

The 95-year-old enlisted as a 16-year-old in March 1942 in the AIF (First Australian Imperial Force), moved on to the 2/3 antitank unit and volunteered to join the 1st Australian Parachute Battalion.

He was a member of the troupe that became known as the ‘Guards of Singapore’ after they deployed to Changi to free the prisoners of war, only to arrive after the atomic bomb was dropped in Japan and the war came to an end.

In his 1568 days of service, Mr Boyce spent 1209 days training and serving in Australia and a further 345 abroad in the Middle East and Singapore.

“At 16 I joined the RAAF Air Crew Reserve and had to attend night classes at, of all places, the old Roseville school and what’s more, in my old classroom,” he says.

“After nine months of algebra, geometry, trigonometry and navigational problems, I was told I had to wait another six months. So, I then went and applied for the navy as a stoker.

“A group of 40 us sat down for a qualifying exam, where the questions were nearly all weights, measures and geometry. Quite a few of them walked straight out and others sat the test, but only two of us passed and we were told we’d be called up in six months.

“I met my cousin the next night and he said he was going to join the AIF the next day. I didn’t want to wait, so I went with him to the showgrounds and I went straight through and that night I slept on a bag of straw in a concrete pig sty and never saw my cousin again until after the war. It seems in no time I was in camp in 1942 with the 102 Anti-Tank Training Regiment in Cowra.”

Mr Boyce narrowly missed out on being deployed on several occasions, a fact he lamented as he had been so keen to serve overseas as soon as possible.

He was eventually deployed to the Middle East aboard the HMS Devonshire, on which his experience in weights and measures saw him become the onboard postman.

“We stopped over in Freemantle, Perth and a few days after setting off, one of the ships left the convoy and sailed East and we were told that it was going around the cape to England with the RAAF troops on board,” he says.

“In all probability, if I would have stayed with the RAAF, I would have been on that ship. Still, I’ve got no regrets, but that’s how the cookie crumbles.

“Just out of Colombo, there was a bit of a show when our escort took on a sub and a torpedo was fired across our bow. We never did find out about any hits.”

Arriving in Port Tewfik, the troops moved into Cairo.

“We caught a glimpse of the pyramids as we drove by and we eventually joined a gun crew in ‘D’ troop as a number one gunlayer. At the camp at El Alamein, I came down with yellow jaundice, meaning I couldn’t move on to Jerusalem to join a kiwi contingent and the light army to move on to Italy,” he says.

Instead, he retuned home on board the Isle de France to Sydney and boarded a train for the Atherton Tablelands to begin jungle warfare training.

“With the withdrawal of the ninth division from the Middle East and training for jungle warfare on the Tablelands, it was decided that the 2/3rd antitank regiment be reduced from four batteries to three,” he says.

“Our battery got the chop, and we were moved to York Force (in Cape York) to build an antitank course. That’s when I volunteered for the Parachute Battalion.”

It was 1944 and Mr Boyce was 21 years old when he volunteered, with the hope he might rescue his cousin, Frank Baldry, who was a prisoner of war in Singapore.

Battalion members were required to have seven jumps before they were awarded their wings and Mr Boyce admits he was “never anything but scared” during those jumps.

“I reckon the third jump was the worst. The parachute packers were supposed to pack the chutes with us looking on, but on the third jump, my packer said ‘Frank, you’ve been watching closely, why don’t you pack the ‘chute?’ and took off up the back of the hanger to have a game of cards with his mates.

“At the time, I thought I did it well, but then I went over to the pub and the more I drank, the more I worried I’d tied the wrong knot. The first thing I did the next morning was look at the wind sock, hoping it was blowing too hard to make the jump.

“It was blowing all right, but not hard enough, and as we walked to the plane, I was thinking, ‘this is it, the chicken’s last walk to the wood heap’.

“It was the same as I staggered to the door like a zombie, but the relief when that chute blossomed out above me saw me let loose with a stream of foul language before I hit old terra firma.

“I thought it was men who were picking up the ‘chuters, but when I struggled up off the ground, I found it was Sandie, the WAAF parachute packer. When I apologised for the language, she just laughed and said, ‘I would have said worse’.”

When the jumps were completed, Mr Boyce and the team were awarded their wings and shifted to a camp at Scheyville near Windsor to join the First Australian Parachute Brigade Proper and they became 3 Section of 10 Platoon and eventually of B Company of the First Australian Parachute Brigade and remained that way until the end of the war in August 1945.

“After a few months, we moved up to Mareeba on the Atherton Tablelands where we began training once again but stepping it up because there was the spill of action in the air,” he says.

“As there were limited plans available, we had to jump out of moving trucks to do our forward rolls and things.

“Then the bomb was dropped on August 5 and peace declared soon after on August 15. One company of volunteers was picked out and their destination was Singapore, and we left in our Biscuit Bombers on August 24 from the Tablelands air strike.

“There were no doors on the plane and we had to fly high over the land because at that stage, the Japanese and their anti-aircraft guns might not have heard of the ceasefire and we had a freezing trip.

“We finally arrived at Singapore Kallang Airport at 1630 hours on a Sunday to sleep under the plans and meet a few Aussie POWs, who devoured all our rations. I was informed that my cousin had been airlifted back two days ago.

“We were sorry and shocked at the state of the prisoners, and I still think of it to this day.”

Mr Boyce went on to become a member of the Guard of Honour for the Ceremonial Surrender of Singapore on September 15.