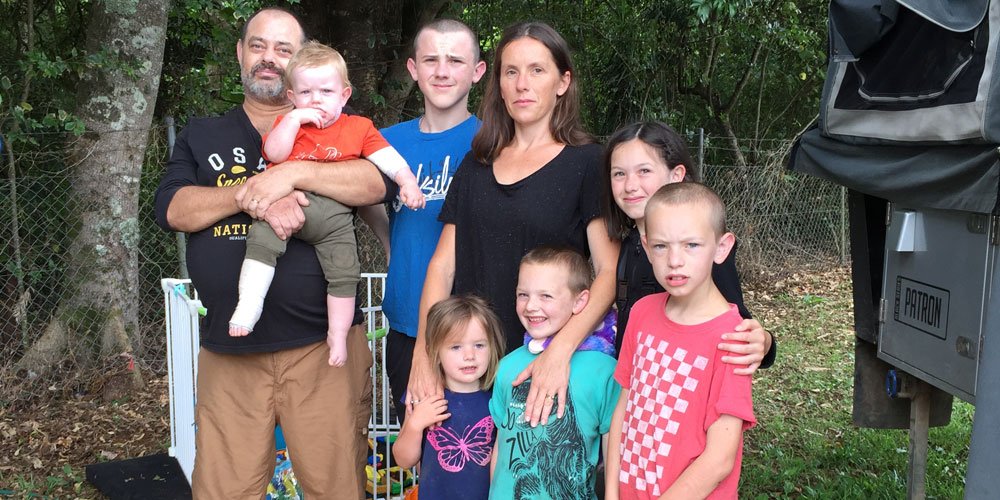 A Sunshine Coast hinterland family of nine has been left homeless and camping at Maleny Showgrounds, with their baby badly burned, in two heartbreaking accidents only weeks before Christmas.

The Todd family has lived in the Maleny area for 10 years and were about to set off on a dream trip around Australia with their seven children, ranging in age from 15 to one. They had spent years custom-building a motorhome, fitting it out with enough seating and bedding for their tribe of kids and were set to depart on October 14.

David Todd was sitting in the driver’s seat arranging insurance with RACQ, when a truck allegedly smashed into the back of the motorhome and wrote it off, 30 minutes before they were due to depart.

According to mum, Belinda Evans, the driver had neglected to close the tailgate on his truck and it swung open, smashing in the back of the $30,000 motorhome and causing significant damage.

“We worked three-and-a-half years to custom build our motorhome,” she says. “You can’t buy motorhomes like that because we need so many seats. It took a great deal of sacrifice from everyone in the family and a great deal of work from David. He suffers from PTSD and anxiety and he gave everything to build this bus. We had finally got it ready to go. It’s not a nice feeling when in that instant you have no home and no car.”

As the family had sold their belongings and vacated their rental home, they found themselves homeless and without an operational vehicle. While the motorhome was insured for $30,000, they say RACQ determined it would only pay $15,000 – not enough for a new motorhome – and they faced a long wait for the money.

When My Weekly Preview sat down with the family at Maleny Showgrounds, they were clearly under a lot of stress, but welcomed the opportunity to share their story and photos of the incident.

The motorhome was in bad shape, with a section of the truck lodged into the back. They say three separate repairers declared it a write-off.

According to the Todds, the driver at fault had offered to arrange their accommodation until the insurance money came through, but they describe being shunted from motel, to hotel to B&B in an unsettling series of moves for the children and say the promised generosity ran out after three weeks.

They ended up at Maleny Showgrounds and had spent the previous three weeks weathering severe storms and living in a borrowed camper trailer, kindly offered by Mark Porter of Maleny hardware and rural supplies store Town and Country.

“Mark from Town and Country gave us some mattresses and the trailer and came around first thing in the morning and set the whole thing up to get the kids off the ground,” Ms Evans says.

Things went from bad to worse when little Vincent, who turned one on December 16, pulled a pan of hot oil onto himself while David was cooking breakfast for the family, suffering second-degree oil burns from his chin to his chest, down his left arm and on his right foot.

“We were momentarily distracted, talking about the insurance,” Ms Evans says. “We would normally never take our eyes off him. I ripped his shirt off and threw him under the tap. His skin started peeling off and he was beside himself, crying and pulling at his skin. He didn’t know what was going on. We went straight up to Maleny Hospital and they put him in the shower, wrapped him in cling wrap and gave him pain relief. We were then taken by ambulance to the Mater in Brisbane.”

For Mr Todd, it was one trauma too many. Suffering from a painful hematoma that had turned septic and left a gaping hole in his side, the loss of his home and now this, he broke down.

“I’ve had seven kids and not one has ever been injured or burned,” he says, close to tears. “I blamed myself. I was trying to take a load off everyone by cooking breakfast. I’ve got PTSD and my body just started shutting down. It does certain things to save you because you’re under so much stress. I have no recollection of things that day because I just shut down.”

Mr Todd was admitted to Sunshine Coast University Hospital for a week, while  his mother travelled from Brisbane to camp with the remaining six children.

“The whole time through all of this, the kids have been amazing,” Ms Evans says.

“The kids go to the skate park and they’ve made friends with different kids that have come through. I’ve had people come up to me that have stayed here and they say, ‘your kids are so well-behaved, well-mannered and kind’.”

And their kindness has been returned. An eight-year-old boy the children met camping at the showgrounds who had saved up his money to buy a new scooter decided to give it to the Todd children.

“I gave him the biggest hug,” Ms Evans says. “I said, ‘that is the sweetest thing. That is what makes the world go ‘round’. He was so beautiful. He comes and plays with the kids often now.”

It doesn’t take long for news of this kind to spread and donations have included a playpen for Vincent so he can stay off the dirt and keep his dressings clean, meals, a bar fridge, tables and a gazebo, which was unfortunately destroyed in a recent storm.

Maleny Auto Spares temporarily lent the family a 4WD and on December 10, they took a train to Brisbane for Vincent to spend a week at the Mater undergoing skin grafts. Four family members are staying at Ronald McDonald House, while the rest are with friends and family.

Vincent spent his first birthday in hospital and sadly, the family will spend Christmas back at Maleny Showgrounds.

“Our kids get one good present each at Christmas, but food is a really big thing for us,” Ms Evans says. “We always plan and bake and have a beautiful table spread out. Being in a big family, to have the privilege of being able to go to the table and eat what you like is a really big deal for the kids.”

Community organisations are donating Christmas hampers for the family and while they don’t have a home, they say they are happy to have each other and will make it the best Christmas they can for the kids.

“Christmas will be different this year – it’s like a mystery,” Ms Evans says. “It will be a mystery prize. They’re just going to get what’s given to us this year.”

A GoFundMe page has been set up to help the Todd family get on their feet. Their dream is to buy a 4WD that can be fitted with a rooftop tent and nine seats. Please donate at Go-FundMe ‘Family of 9 lost their home’ or gf.me/u/zavkpk.

A welcome connection
Wet and wild