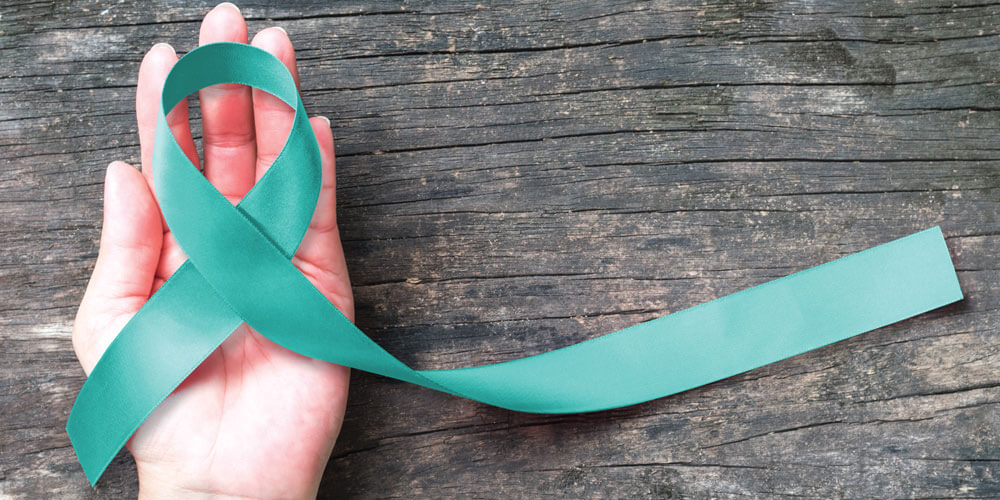 In 2016 Anne-Marie Mulders was recording farewell messages to her two young boys before she was wheeled in for complex surgery to remove an 11-centimetre tumour on her ovary.

“I said I’ll love you forever and to be good for your dad and to do what you love in life, chase your dreams and don’t let anyone get in your way,” she recalls while being interviewed by ovarian cancer ambassador Monique Wright on Weekend Sunrise in 2017.

Annie, as she prefers to be called, has since celebrated every single day she has been alive. This is all the time she gets to spend with her husband Christian and sons Matthew and Lachlan.

Time the statistics said she probably wouldn’t have.

Annie is lucky. Three out of the four Australian women diagnosed with ovarian cancer will not survive more than five years.

With February marking Ovarian Cancer Awareness Month, Sunshine Coast women are being urged to “ovary-act” to fight back against the deadliest of women’s cancers.

Ovarian cancer has a survival rate well below the average for all cancers in Australia and there has been little improvement in treatment in nearly 50 years due to funding limitations.

Based on available data, less than $55 million was invested in ovarian cancer research between 2008 and 2013. The National Breast Cancer Foundation was able to raise almost half of that in just one year of fundraising.

With the early detection message well ingrained in Australians when it comes to breast and prostate cancers, survival rates are now at 90 per cent and 94 per cent beyond five years. Only 45 per cent of women diagnosed with ovarian cancer will make that milestone.

Ovarian Cancer Australia (OCA) has provided support for women and their families, raised community awareness of ovarian cancer, advocated for improved services for women and promoted and funded high-impact research since 2001, and CEO Jane Hill says she wants ovarian cancer to be “the next cancer that we tackle successfully over the next five years.”

“Now is the time for Australians to ovary-act. This disease is taking our mothers, daughters, wives and sisters. It’s not going away,” Ms Hill says.

More than 75 per cent of ovarian cancer cases are detected in the advanced stages because symptoms are similar to menstrual cycle symptoms such as bloating, pelvic or stomach pain, feeling full after a small meal and needing the toilet often or urgently.

The key is the longevity of the symptoms and Ms Hill says if they are new for you or persist for any longer than four weeks, it’s time to visit the doctor.

“The difficulty with ovarian cancer is that the vast majority is a type called high-grade serous, which tends to spread and then bulk up rather than bulking up and spreading,” she says.

While doctors can rarely diagnose ovarian cancer without a biopsy or surgery, they can order a pelvic ultrasound to look for unusual masses or order a costly CA125 blood test, which can show up protein markers.

In the end, it was Annie’s insistence on an ultrasound after experiencing stomach pain that uncovered the mass on her ovary and drastically improved her chances of survival.

Treatment has largely remained the same for the past 30 years and involves a complete hysterectomy or a complex surgery to remove the ovaries and fallopian tubes, followed by chemotherapy.

“Through this, the cancer tumours are constantly evolving, and we have found from research undertaken in Australia that these tumours can develop resistance mechanisms, such as a pumping system that can detect the chemotherapy particles and pump them out of the cancer cells straight away.”

While this sounds dire, Ms Hill says the research being done here is among the best in the world and there is a “small, but focused” team with “strong projects afoot” right now.

“We are excited that the government has a medical research future fund, but as yet ovarian cancer has not really benefitted from that,” she says.

“We would like women’s cancers, including ovarian cancer, to become a priority because we have seen how, when the resources are put in, the survival rates can be improved.”

Ms Hill says because ovarian cancer concerns reproductive organs in women, people are a little uncomfortable talking about it. But breast cancer was once like that too, and she says now is the time for change.

Women who may be at higher risk of developing ovarian cancer include those over the age of 50, those who have never had children or had children later in life, those who suffer from endometriosis and those who began puberty early or menopause late.

Ovarian cancer can also occur through a genetic predisposition – the BRCA1 and BRCA2 gene mutation. Of the 1600 ovarian cancer diagnoses in Australia this year, about 17 per cent of these women are thought to carry the BRCA gene mutations.

“The BRCA gene mutations can increase a woman’s lifetime risk of developing ovarian cancer from a few per cent in the general population to approximately 59 per cent for BRCA1 and 17 per cent for BRCA2,” Ms Hill says.

“The BRCA gene mutations can be inherited from either the mother’s or father’s side, with a 50 per cent chance that an individual with a BRCA mutation passes this on to each of their children.”

For Twitter Australia managing director and OCA board member Suzy Nicoletti, losing her mother to ovarian cancer compelled her to “ovary-act.”

“To think that she visited doctor after doctor for more than a year and was misdiagnosed more times than I can count is incomprehensible, particularly in this day and age,” she says.

“By the time she was finally diagnosed, Mum’s prognosis was not good. She was given a 20 per cent chance of surviving more than five years. Looking back, I wish Mum knew the signs, symptoms and risk factors of ovarian cancer; perhaps this would have enabled a more timely diagnosis.”

Ms Nicoletti recently made the decision to undertake genetic testing to determine whether she carried the mutation.

“I want to be in a position where I can make informed choices about my health,” she says.

“I implore all Australians to not let another ovarian cancer awareness month go by without learning the signs and symptoms and asking your family members about your family history of ovarian cancer. It may just save your life or the life of someone you love.”

Weekend Sunrise presenter and OCA ambassador Monique Wright has connected with dozens of women who have courageously battled ovarian cancer. She has also experienced the devastating effects it has had on the women close to her.

“I never knew my grandmother, Rosemary,” she says. “It was the early ’70s when they suspected she had cancer.

“They opened her up and the cancer was riddled through her body. She died within four months at the age of 56. Her death certificate stated she’d had metastasised cancer, but doctors told her husband and children that it had started in her ovaries.

When interviewing Annie, Ms Wright met young Nicole Graney, who was just 12 when she was diagnosed after experiencing back and abdominal pain. It was initially written off as a sign of puberty, but her mother pushed for an ultrasound.

“As a trained sonographer, her mother saw it and knew that it was ovarian cancer in that moment,” Ms Wright. “But Nicole is now 19 and doing absolutely brilliantly as a healthy, gorgeous young woman.

“Unfortunately for every survival story, there are too many that haven’t made it. We are all busy as women, but we really need to be aware of this because this is a silent killer.

“The squeaky wheel gets the oil and you have to be your own best advocate. Being a shy wallflower when it comes to your health serves no one.”

Despite the statistics, Ms Hill says she is optimistic about an ovarian cancer-free future, provided more Australians stand up and “ovary-act”.

“We could potentially prevent a lot of future ovarian cancer deaths if we can get better preventative testing. We’ve already got very innovative projects here at Ovarian Cancer Australia to promote testing for the BRCA mutation in high-risk groups and another thing we are working on is ensuring people who suspect they have ovarian cancer seek treatment at specialist centres,” she says.

“We may not find the holy grail, but we can certainly work towards better results for women so they can live a lot longer and have a good quality of life. With good research, clinical trials and better treatments, that is a possible future for us.”

To find out more or to donate to OCA, visit ovariancancer.net.au.

• 1600 women are diagnosed with ovarian cancer in Australia every year.
• More than 1000 will die
each year.
• Only 45 per cent of women will survive five years post diagnosis.
• If found in its early stages, women have an 80 per cent chance of surviving after five years, but 75 per cent of women are diagnosed in advanced stages.
• It is the deadliest and one of the most underfunded women’s cancers.