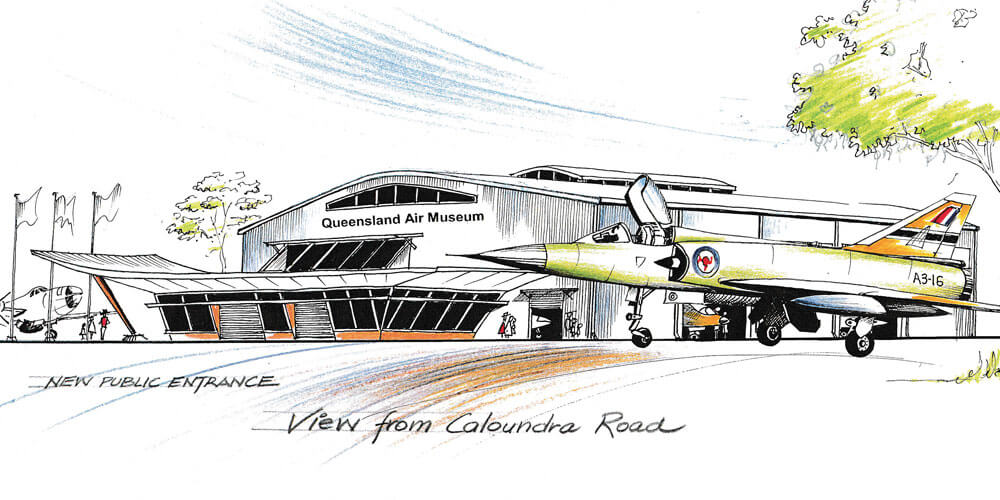 The iconic Queensland Air Museum is poised to become a victim of its own success and the team of tireless volunteers who run the popular and unique tourism destination are calling for help to expand and ensure its future.

The QAM, which is Australia’s largest and most diverse aviation museum, was founded in 1973 and now has 430 members, including 110 active members who dedicate a collective 60,000 volunteer hours a year working at the Pathfinder Drive attraction in Caloundra West.

With an average of three aircraft acquisitions a year, the two-hectare site has reached critical mass and the QAM executive committee has been in talks since 2012 with the Sunshine Coast Council to lease a 3.8-hectare parcel of adjoining land with Caloundra Road frontage.

QAM marketing manager Geoff Smith says there has been significant delay in a decision to allow the QAM to take on a 30-year peppercorn lease on the land due to several state government stakeholders also being involved.

“We are caught up in a world of bureaucracy at the moment and while we have the support of the local council, the decision-making has been going on for seven years now, longer than the Vietnam War, and there’s no sign that it’s likely to be resolved any time soon,” Mr Smith says.

“We have been working away quietly, but the harsh reality is that unless we can get increased land to ensure we can continue to acquire historical aircraft as they become available, we will lose our integrity as an historical aviation museum and this will impact the number of tourists who come to Caloundra to visit the museum.”

The QAM attracts 25,000 visitors a year, with 15 per cent of those being international visitors.

Mr Smith says an expanded footprint with a new reception area creating a statement entrance on Caloundra Road has the potential to boost those numbers to 75,000 within a few years, providing a significant economic boost to not only the town, but the whole region.

To strengthen its case, the QAM executive committee has presented the council with a comprehensive future expansion report and Mr Smith hopes community support will encourage some action to be taken sooner rather than later.

“This is a multi-layered situation because if we can no longer acquire new aircraft, we will lose visitors as well as the volunteers who work on the aircraft. If our volunteer base dries up, so does our capacity to do all of the other community events that we do,” he says.

“When we first started this campaign seven years ago, we had the room to expand.

“Now, the situation is critical, and we are at that stage where the next aircraft that comes to us will cause some serious decision-making.”

Mr Smith says a split site was not an attractive option and having to relocate the museum to a larger site is “almost unimaginable,” but the committee is hopeful it will finally see some action to allow the museum to expand its highly successful facility in its current location.

Visit qam.com.au to find out how you can support the Queensland Air Museum in their expansion efforts.