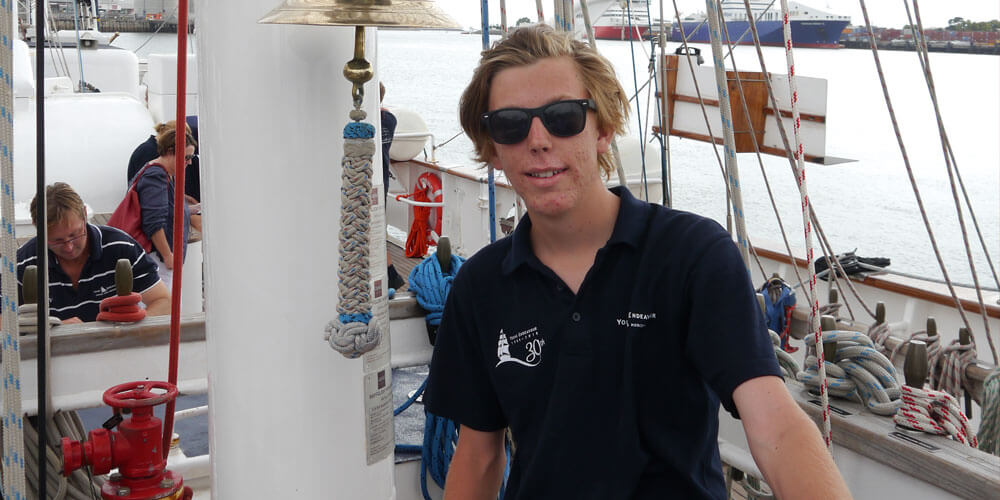 The Bass Strait is a notorious stretch of ocean with an infamous reputation for causing strife for even the most experienced crews, but it turned out to be the calmest section Matt Ward sailed on his journey aboard the Young Endeavour.

The Alexandra Headland 17-year-old won a position aboard the 11-day V03/18 journey from Sydney to Davenport through an online ballot and joined 24 crew members from around the country to sail the majestic brigantine.

“On day four, we were sailing in some pretty gnarly conditions just off Jervis Bay [in New South Wales] with 35-knot winds and four-metre swells. However, ironically, when we crossed the Bass Strait it was so calm that we had to motor across much of it,” he says.

“In fact, at one point we simply took down the sails, which weren’t moving us anywhere, and jumped off the side of the ship for a swim right in the middle of the Bass Strait.

“Swimming in 40 metres of deep blue water was definitely an experience I will remember for a long time to come. None of the staff had ever swum in the Bass Strait before and didn’t think that they would ever get the chance again. We were so lucky.”

Matt graduated from Immanuel Lutheran College last year and learnt to sail a sabre (one-man dingy) at the Maroochy Sailing Club on Chambers Island. While he has enjoyed sailing through the heads from the Mooloolaba Yacht Club, Matt says the rough seas they experienced aboard the Young Endeavour were an eye-opener.

“Moving around below deck was a challenge to say the least. I was lucky enough to not get seasick, however, most of the youth crew (and some of the well-seasoned navy staff) became quite green around the gills.

“Climbing the rigging was an obvious high point of the trip. It definitely takes some getting used to in order to feel comfortable sitting on the yards up to 34 metres above the rocking ship, but when you do it feels so liberating.

“Many of my fellow crew admitted that they could never imagine themselves climbing so high in any other circumstance.

“Coming into Devonport we followed the naval tradition of manning the yards.

“This is where the entire youth crew of 24 climbed the rigging and ‘lay aloft’ on the yards as we sailed into port. The staff even fired off two ceremonial cannons on the way in.”

Matt says the experience was made even more special as the Young Endeavour’s youth scheme is celebrating its 30th anniversary of voyages this year.

A few days after returning home from the voyage, Matt moved to the University of Queensland campus at Cromwell to begin studying a Bachelor of Mathematics.

“It was an amazing trip that I would recommend to everyone. Not only did I learn so much about sailing, but I got to develop lifelong friendships and valuable skills in leadership and teamwork,” he says.

“Looking forward, I want to keep sailing at every opportunity. The dream would be to sail in a Sydney to Hobart race.”

A sweet idea
Women set to shine on the Coast