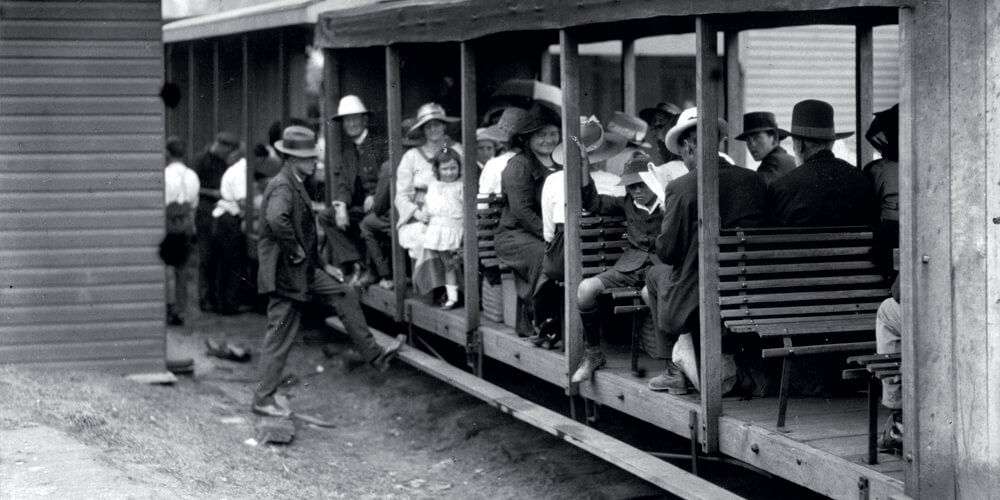 Like everything on the Sunshine Coast, it all begins with primary production. With the sugar mill to open in Nambour in 1897, it was necessary to find an efficient way to bring in the cane harvest from the district’s farms, and what better way, than by tram.

Cane trams had been operating successfully in other sugar districts since the 1880s, so a network was surveyed in the districts around the Nambour mill, and tramlines built ready for the first crush.

They were a narrow 610 millimetre gauge built for economy not speed, as the first wagons were pulled by horses. The network was gradually extended and by 1905, when the first locomotive arrived, there were 42 kilometres of permanent tramline.

By 1907, the mill’s board of directors was looking for other uses for its tramway network. It was earning a little extra delivering firewood but for half the year, from January to June, the lines were unused.

At the same time, people were looking for a transport service connecting to Nambour, to carry both goods and passengers. Roads were rough, damaged by horse-drawn vehicles carrying heavy loads of produce and in the wet season, were regularly impassable. The tramlines were the obvious solution.

The mill’s finances and public demand finally came together after the cane crush in the Christmas holidays of 1909.
There would be a two-month trial of public transport on the tramway for three kilometres from Nambour down the Petrie’s Creek line to Cedar Tree, near Rosemount.

A carriage with a capacity for 32 people was built. Goods were loaded in the mill yard before the tram set off down Mill Street to stop between the Club and Royal George hotels for passengers to board.

The trial was so successful it was decided to continue the service. Passengers were warned, “This company is not a common carrier. It only carries passengers as it thinks fit” and it wasn’t liable even if “passengers are landed at their wrong destination”.

The company also stated that its charges were for upkeep not profit. In 1912, the line was extended for another 1.2 kilometres to Deepwater at Bli Bli where passengers could transfer to a boat for the trip down river to Maroochydore and Cotton Tree.

A branch line had been built to the Maroochy River in 1911, but it stopped there until August 1921, when finally a bridge was built. A hand-operated system of pulleys and counterweights was used to raise the central span so boats could still use the river.

Coolum was now connected to the mill and an isolated line was built in 1922, between Coolum Creek and Coolum Beach which was used for both cane and passengers.

More than 1000 people took the tram from Nambour to Coolum during the 1922 Christmas holidays and the tram helped build Coolum as a seaside resort for day trippers and holidaymakers.

The passenger services to Deepwater were replaced by buses in 1927 and the Coolum line closed in 1935.

A final passenger excursion to Coolum ran just before the line between South Coolum Road and the Beach Hill terminus was lifted in 1957.

Moreton sugar mill had its last crush on December 3, 2003. The tramway network was dismantled and most of the line removed. It was the end of an era.

Continue Reading
You may also like...
Related Topics: Histoty, Nambour