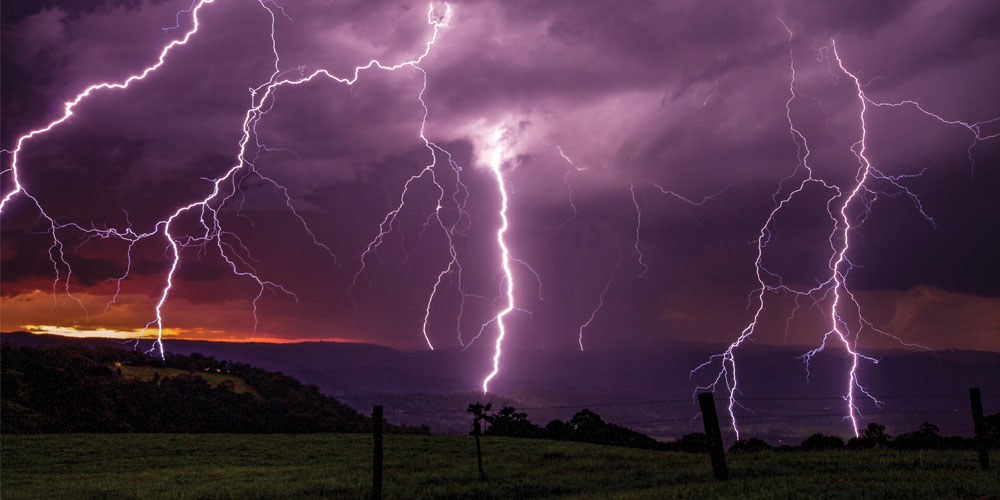 When hailstones the size of golf balls hammered the Sunshine Coast on Sunday afternoon, it caught many of us off guard. Long lines of cars were stranded on the Bruce Highway, their windscreens smashed to smithereens. Farms sustained hundreds of thousands of dollars worth of damage to crops, traffic lights were out and hundreds of homes were still without power as of Monday.

The supercell storm came in swift and strong, a savage wake-up call after weeks of nothing but hot weather and bushfires. While the Bureau of Meteorology issued a warning for destructive winds and giant hailstones on the afternoon of November 17, most of us were happily enjoying our Sunday without keeping an eye on storm warnings.

The supercell storm was a stark reminder that we can’t afford to become complacent, even when we go for weeks without so much as a drop of rain on the horizon.

Thomas Hinterdorfer from the Higgins Storm Chasing team has been keeping a close eye on weather patterns and has insight into the types of storms we can expect this year.

“November is usually our most active month for storms, but this year has been a slow start to the season,” says Mr Hinterdorfer. “It’s going to be similar to the last two years where we had below-average figures for the number of storms but above-average for the severity of storms.

“We’ll probably get a wave of pretty active storms through to late February and late March, which will be in conjunction with the upper troughs that want to come through.”

Sunshine Coast Council’s disaster management coordinator Cathy Buck says we won’t be seeing a lot of rain over the next month or two, but we need to stay vigilant and be prepared for storms.

“The Bureau of Meteorology’s forecast is fairly neutral,” she says. “We’re not looking at any big rain until January, although we’ll certainly be getting some storms throughout the next couple of months.”

While there are certainly areas of the Sunshine Coast prone to flooding, it’s not a major problem for us compared with other parts of the country.

“In terms of the unique challenges the Sunshine Coast faces, it would be more so those supercells,” says Ms Buck. “It’s those storms we’re more susceptible to, rather than major flooding. We will have flooding if we have enough rain though. We would never discount that. But because of our geographic location, the waters come up quite quickly and then they recede quite quickly. Prolonged flooding events are not as much an issue for us as they are for western towns.”

Australians are famous for our ‘she’ll be right’ attitude but as major weather events increase, it’s becoming increasingly more important to be on guard.

“The community used to be very complacent but now they are starting to take our safety messages on board,” Ms Buck says.

“The main feedback we get from the SES is that people need to make sure their yards are tidy. Most people have their emergency kits at home so it’s more about keeping those loose items put away – trampolines, furniture and play equipment. Just those things that could possibly be taken away by high winds.

“Also, we do still get people trying to cross flooded roads. We try and promote the ‘if it’s flooded forget it’ message as much as possible. Under no circumstances should you need to drive through flooded water. It’s just too dangerous. It’s better not to get to your destination.”

When you look at the long list of items authorities suggest keeping in emergency kits, it’s a little overwhelming. Do we really need all that stuff?

“We do suggest people have all those things in their kits,” Ms Buck says. “They aren’t necessarily going to need it all.

“Things like three days’ worth of food is more important in the more inaccessible areas of the hinterland that get cut off. We expect people to be resilient in those areas and have torches, tarps and make sure their homes are safe.

“Tune into warnings, keep up to date on Disaster Hub and our social media channels. We recommend listening to ABC radio to keep abreast of what’s happening.”

For more information on being prepared for storm season, visit disasterhub.sunshinecoast.qld.gov.au or the Bureau of Meteorology website at bom.gov.au.

There are three thunderstorm types: the single-cell, the multicell and the supercell. Supercells account for most of the serious thunderstorm events we experience. It is characterised by the presence of a mesocyclone: a deep, persistently rotating updraft.

Severe storms or thunderstorms are classified by the Bureau of Meteorology as storms that are likely to produce large hail measuring more than two centimetres in diameter; wind speeds of more than 90 kilometres an hour, and heavy rainfall conducive to flash flooding.

A severe storm warning will only be issued by the Bureau for storms that are likely to produce all three elements.

The wet season usually starts on the Sunshine Coast with thunderstorms in November. Cyclones can occur from December to April.

Unlike north Queensland, the risk of a category 4 or 5 cyclone is rated as very low. Winter storms are usually associated with fast-moving east-coast lows. 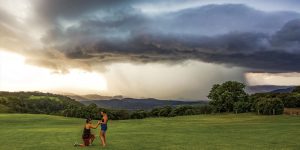 Brisbane’s Thomas Hinterdorfer loves storms so much, he proposed to his girlfriend Amber Hardie in a big green paddock with a spectacular storm brewing behind them. Of course, the special moment was captured on camera because taking photos of storms is what Mr Hinterdorfer does for a living as part of the Higgins Storm Chasing team.

“The plan was always to get engaged in front of a big storm, but we missed a lot of opportunities from Christmas onwards,” says Mr Hinterdorfer. “We were either on the wrong side of the storm or in the wrong position or just not chasing at all. We couldn’t seem to get that perfect combination.

“Amber was the one who wanted to chase the day before Valentine’s Day and I was a bit sceptical. We went up to a hill in Bellthorpe and the moment just happened. It was only a 10-minute window, but it worked.”

Rain bucketed down just minutes after the proposal and when the couple marries in 2021, they’re hoping the weather will be fine.

Mr Hinterdorfer, who is studying meteorology at university, travels to the US most years to chase storms, but says he’ll have to take a year off to pay for the wedding.

“Amber wants to come to the States too and do tornado alley with me,” he says. “The plan whenever I go is to go between April and June. I go wherever there are storms and I go nonstop every day, sleep in hotels, chase, eat, repeat.

“Tornadoes are the pinnacle, but if you can get a good day with a beautiful-looking storm that’s photogenic, that can sometimes be worth more than a tornado. Tornadoes aren’t always photogenic and if you go through populated areas, they’re hard to chase because you start dealing with debris.

“The lower-end tornadoes can be more photographic. If you can get a supercell with amazing structure, often a chaser will take that over a tornado.”

Mr Hinterdorfer has been chasing and photographing storms since he left school seven years ago and was delighted when Sunshine Coast-based Jeff Higgins asked him to join Higgins Storm Chasing, which produces high-resolution weather forecasts for its subscribers, as well as stunning images made famous originally through Facebook. During storm season, he can work 90 hours a week and has found himself in dangerous situations, but cautions the general public from following in his footsteps.

“We recommend you stay indoors and out of harm’s way when severe storms are around,” he says. “Make sure you’ve got battery-powered objects like a radio and torch and make sure things are charged up.

Storm chasing is regarded as one of the most dangerous jobs in the world. So why does he do it?

“For me, it’s seeing something natural and you get these scenes that just leave you speechless. I’ve had it both in Australia and in America. You can’t believe what you’re looking at.

“There’s a bit of a scientific purpose to it as well. You want to understand why things happen. One of the big mysteries is why some storms produce a tornado and some don’t. No one really knows that yet, but we’re getting closer to finding out why.”