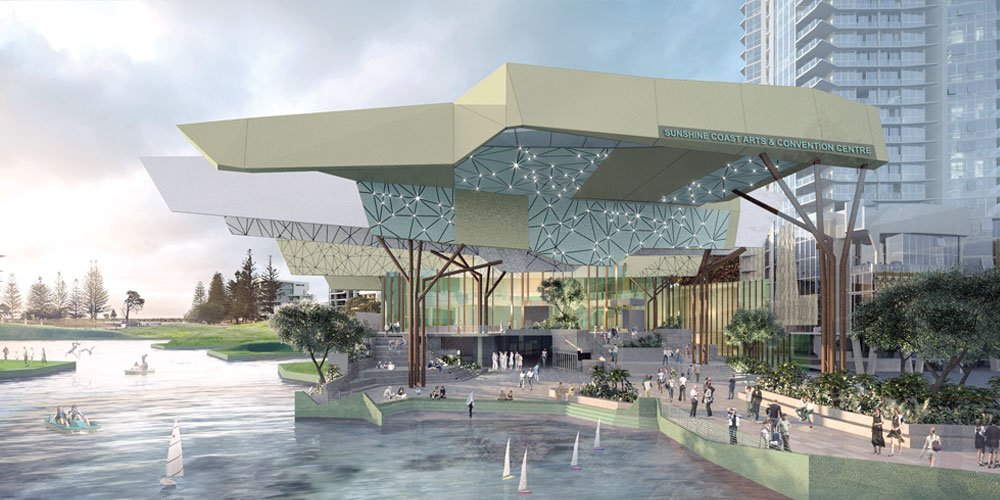 Stage one of the proposed Sunshine Coast Arts, Convention, Exhibition and Entertainment Centre is starting to gain financial momentum as the push to fund the project kicks into gear.

The first centre of its kind for the region – planned for a 3.5-hectare site in the new Maroochydore CBD – is hoped to boost the local arts scene, bringing it in line with the rest of the country.

“We are compiling community interest in mapping it down to a first stage component,” Ms Barry Jones says.

“Community enthusiasm, boosted by a generous injection of funds from our leading benefactors and organisations, will no doubt be vital in driving the project to fruition.”

The association has been pushing for the entertainment and performing arts centre as stage one of the project and says as the “ninth largest” community in Australia, the region has been lagging behind the rest of the country.

“There are no excuses now,” she says. “For a region that produces fantastic local talent, students still need to travel to other areas to reach their full potential.

“We want to give the city centre a heart and vibrancy.”

The entertainment centre will seat 2000 people with the performing arts centre to seat between 1500 and 2000 people.

Sunshine Coast Council has lobbied the state and federal governments to provide $100 million towards the project.

Six visibility studies have been conducted over the past 25 years for an exhibition centre on the Sunshine Coast.

Nambour Aquatic Centre is set to receive more than $1 million for a major upgrade thanks to the state government’s COVID Works for Queensland program.

The upgrades will include a new water play area and water slide, with Sunshine Coast Council Mayor Mark Jamieson welcoming this and other approved projects across the region.

“Thanks to the $5.35 million in COVID-19 Works for Queensland funding, Sunshine Coast Council will be able to deliver much-needed upgrades, expansions and maintenance projects at sports and recreation facilities right across the region,” Mayor Jamieson says. “Importantly, this funding will enable these projects to be delivered sooner, stimulate our local economy and build a stronger community by creating work across a variety of trades and services, a true reflection of our healthy, smart and creative region.”