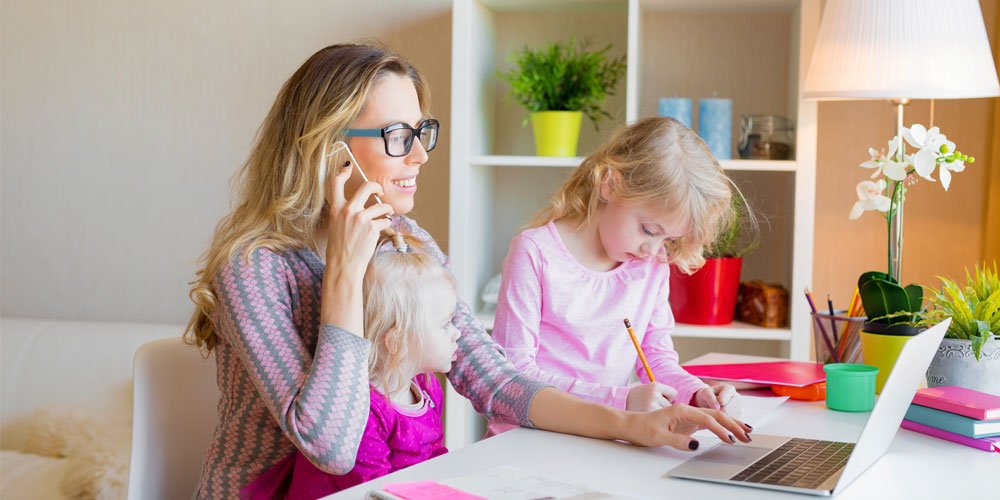 A post-pandemic economy could offer affordable childcare, generous paid parental leave and better pay and conditions in the care sector.

“Ultimately an economy should be about people – it’s a means to an end, not an end in itself,”says chief executive of the Grattan Institute, Danielle Wood.

Prime Minister Scott Morrison says one million more women are in jobs because of federal coalition government policies. But questions remain about a lost decade of wages growth, the quality of those jobs and everything that wraps around women who want to work more.

“Why do we talk about tax policy? We worry about incentives to work or to save,” Ms Wood says. The president of Australia’s peak body for economists and co-founder of the Women in Economics Network says Australia should be thinking about other incentives such as affordable childcare.

“We’re hand-wringing over the top marginal tax rate being 49 per cent and what that will do to work incentives and we’ve got women who are facing effective tax rates of 80, 90 or 100 per cent,” she says.

Many economists – and parents – see accessible and affordable childcare as the single biggest measure for closing the gender equality gap and improving lifetime earnings.

A multi-billion-dollar spend on childcare rebates took effect this week (March 7) under current government policy and Labor also plans to take a generous package to the next federal election. But if women with younger children want to work beyond three days a week, currently many end up losing all of their take-home pay on childcare – if they can get a place.

Nor are most workplaces closing the gender pay gap, according to a scorecard released last month. Six in 10 large Australian employers are making no progress and most pay men more than women, says the Workplace Gender Equality Agency.

Data collected from private sector employers with more than 100 workers shows the gap in earnings has barely moved at 22.8 per cent, with women earning on average $25,800 less than men.

Another key part of the gender economy debate is pay and conditions in the care sectors – childcare, aged care and disability care.

“These are incredibly underpaid in terms of their social value and you can only conclude the reason that has persisted for so long is because they are female-dominated care sectors,” Ms Woods says. “The expectation is that women will work for very little but it is going to be a very significant long-term economic challenge if we’re not going to be able to get a pipeline of workers into those sectors.”

Demand for those services is only forecast to grow. Treasurer Josh Frydenberg late last month told a business audience Australia will have a “great reshuffle” in the labour force as people seek better pay. But a breakdown of which one million women are getting the extra jobs cited by both Mr Morrison and his treasurer, where they live or how old they are, was not immediately available from the government. Some fear they’ll only see a great shuffle sideways.

Women are also retiring from paid work with almost a third less saved than men. However, legislation was passed in the final hours of the parliamentary week that could make a difference.

People working a handful of low-earning casual jobs to get a living wage have been missing out on any super from their employer and heading for poverty in retirement. The new law set to take effect from July will deliver on a promise made in last year’s Women’s Budget Statement.

Benefiting women, and younger casual workers, a $450 per month earnings threshold on super has been scrapped.

“Not only does it give them the same right to save for their future as other workers, it means an effective 10 per cent pay increase for some of our lowest paid workers,” says superannuation minister Jane Hume.

“It did disproportionately affect women, who were more likely to be in those low-paid jobs,” she says.

But Industry Super Australia says the federal government’s failure to pay super on top of government-funded parental leave has ripped $1.6 billion out of the retirement savings of working mothers.

“The federal government is lagging and needs to follow the example of our best employers and pay super on its parental leave scheme,” ISA spokeswoman Georgia Brumby says. “This is an opportunity for the prime minister to show he is serious about women’s economic security.”

More than 80 per cent polled in a recent Association of Superannuation Funds of Australia survey said the federal government should introduce measures to boost the super balances of women who take time out to have children.

The peak body has called for the introduction in the next federal budget of a $5000 Super Baby Bonus payable directly into superannuation following the birth or adoption of a child.

The proposed payment could benefit up to 300,000 women per year and would be equivalent to the amount a person would receive from super contributions on a $60,000 wage for one year.

ASFA chief executive Martin Fahy says there is a significant gap of 23.4 per cent in superannuation balances between men and women as they approach retirement.

“Broken work patterns, COVID-19, and the early release of superannuation, which was used to help get Australians through the pandemic, have eroded the retirement savings of low-income earners and women in particular,” he says. “It is now essential that repair be undertaken to low-income earners and women’s retirement budgets through targeted assistance.”

For economists, it’s all about encouraging a permanent change in behaviour. “Men who take parental leave are more likely to be caring for children right up until the child is 10 and that creates more space for women to participate in the workforce where they want to do that,” she says. “As an economic policy, it actually leads to behaviour change; it creates scope for women to work more.”

Economist Preston Tsamassiros uses a ‘domestic work’ and ‘market work’ index that shows a transfer of chores and a more equal long-term split in paid work over the decade following paternity leave taken. The transfer of housework from mothers to fathers is three hours a week or 20 days of full-time work a year in households that can get paternity leave, he says.

As well as a boost to GDP, there can be benefits for the mental wellbeing of fathers and partners and the intellectual and emotional development of the children.

Grattan Institute advocates 26 weeks of paid parental leave for families or single parents. Parental leave pay available from the federal government is $772.55 per week, or $154.51 a day before tax, for a maximum 18 weeks. Dad and Partner Pay can be added – providing another 10 days – to bring it up to 20 weeks.

Around 250,000 families are set to benefit from the federal government’s increased Child Care Subsidy (CCS), which came into effect on Monday, March 7.

On average, these families will be more than $2200 a year better off.

Families earning less than $354,305 a year with two or more children aged five years and under in care will have their CCS rate increased by 30 percentage points for their second child and any younger children, up to a maximum rate of 95 per cent.

More than half of eligible families will receive the maximum 95 per cent subsidy.

Families already getting CCS don’t need to do anything. Services Australia will automatically increase the CCS for eligible second and younger children.

The COVID recession hit women hard. They lost more jobs than men – almost eight per cent at the peak of the crisis, compared with four per cent for men.

They shouldered the increase in unpaid work – including supervising children learning remotely – taking on an extra hour each day more than men, on top of their existing heavier load. They were less likely to get government support – JobKeeper excluded short-term casuals, who in the hardest-hit industries are mostly women.

Women now make up almost half the workforce, and they are overwhelmingly employed in the industries that were hit hardest by the government-imposed lockdowns, such as hospitality and tourism.

Between February and May 2020, the construction sector lost less than five per cent of its work hours but got more than $35 billion of government assistance. In comparison, the hospitality sector lost more than 47 per cent of its work hours but got only about $1.3 billion of direct government assistance. Women who became unemployed or left work in the recession face longer-term impacts on their wages and career progression – six months out of work can add another $100,000 to the average $2 million lifetime earnings gap between men and women with children in Australia.

The recommendation? Governments should inject more money into services sectors, childcare, and aged care, and rewrite the ‘rescue and recovery’ playbook before the next economic crisis.