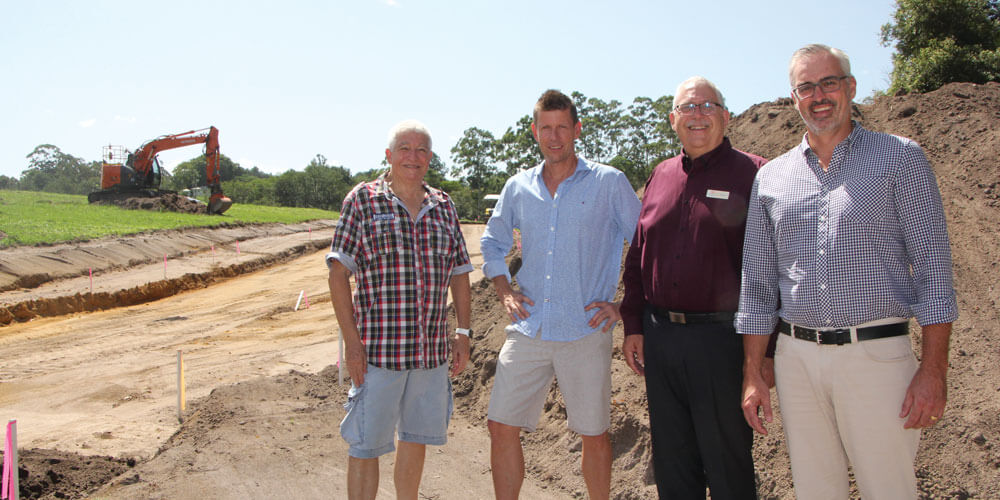 Allan Pease, Scott Juniper from Cube Developments, Chris Franck from Bloomhill & Sheldon Busch from McGrath Estate Agents are working together for the charity

Allan Pease describes himself as a “walking dead man”, having been diagnosed with terminal prostate cancer 21 years ago at the age of 47.

But the Sunshine Coast resident, who is known as Mr Body Language, says he decided to focus on clean eating, meditation and replacing the diagnosis of a three-year life expectancy with his own that has seen him continue to live a vibrant and fulfilling life.

“They’ve given me three years a couple of times, statistically that’s the average of the 100 people of my age who have my condition, but my minimal acceptable date is in 2040 because that’s when I will be 90. On August 15, 2040 at 4pm I will sit down and regroup and say, ‘what am I doing next?’.”

Speaking exclusively to My Weekly Preview just days after his return from three months travelling to 16 different countries, Mr Pease says he was devastated to read about Bloomhill Cancer Care’s pleas for funding assistance to allow it to continue offering nursing services.

Mr Pease and Olympic athlete Raelene Boyle have been Bloomhill ambassadors for a number of years and Mr Pease says the organisation bridges so many gaps for patients by providing holistic care.

“When you go to hospital, there are only three basic approaches to cancer –chemotherapy, radiation and surgery,” he says. “After that, there’s nothing more they do for you and people leave in a state of terrible distress, I’ve been there myself.

“Those who have nowhere to go and no one to talk to can often find support groups, but often they only meet once a month and talk about issues and have speakers. A place like Bloomhill offers a complete follow-up to get [the patients’] mental health right, to get their goal setting right and to empower them with the skills to help them to live longer with a whole range of complementary therapies.”

Mr Pease says he knows Bloomhill is “always running on a shoestring” but with the Buderim organisation’s cancer care nurses working with as many as 250 patients each at a time, the self-funded operation can no longer keep up with the increase in demand.

He says the cost of running the organisation is increasing dramatically.

“It’s tough going. If they don’t get the funding they need, it will be such a disappointment,” he says.

“They do a fabulous job with the help of a lot of volunteers and it’s a necessary service for people to be able to get past cancer or to learn how to manage the cancer they have. If you don’t have ‘the Bloomhills’ looking after these people, the pressure will pile up on the hospital system and the $250,000 they are asking for [from the State Government] is not a lot of money for the state budget, but the cost to families is far more dramatic.”

Despite pleas for financial assistance, the state and federal governments have not come to the party and although community support has been overwhelming, Mr Pease says more is needed. He knows first hand how important care is for patients. Earlier this month he hosted a seminar to 800 people in Iran on how to survive cancer and live a positive life.

“Because of the sanctions there, some people in that room will die through lack of treatments and, hopefully, many will survive because of the seminar,” he says.

“These patients have unfortunately been described as ‘collateral damage’ as a result of sanctions. They don’t have access to the drugs to treat their cancer and as a result, the death rates are pretty high.”

The seminar was sponsored by the Iranian hospitals and cancer patients could attend free of charge. Mr Pease says this was the third annual seminar he has conducted in Iran and more than 4000 people turned up to the inaugural event. “They had never seen anything like [the seminar] before, which is all about adjusting your diet and lifestyle – the Bloomhill approach fits under this category – and a lot of them thought it was going to be a healing,” he says.

“It was really heart-wrenching to see so many cancer sufferers in those conditions there, but you’ve got to give people hope and get them to understand they can survive these things and they can do it with a good quality of life. It really brings home how fortunate we are in Australia to have the likes of Bloomhill.”

Mr Pease says cancer sufferers often want to put the experience behind them and feel uneasy sharing their journey with others.

“Barb and I decided when I was diagnosed that we would make it a public thing and reveal it to bring awareness to it and help people in similar situations,” he says.

Help those who help others
Taking it to the limit