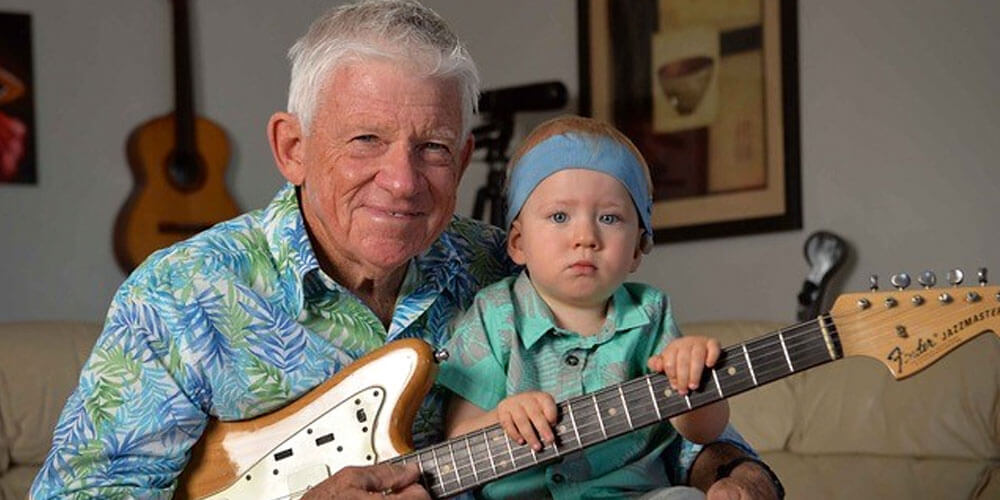 “What a beautiful noise comin’ up from the park, it’s the song of the kids and it plays until dark.”

The lyrics of Neil Diamond’s 1976 hit Beautiful Noise will take on a whole new meaning when musician Barry Bull sings them at his annual Gift of Sound fundraising concert for Hear and Say.

The September 9 concert will be the third major fundraiser Mr Bull has held since his youngest grandson Archie Cavanagh received bilateral cochlear implants at 11 months old.

Mr Bull says when Archie was born profoundly deaf, he was devastated that his grandson would never know the joy of music and the melodies that have been a passion and career for Mr Bull, who is the former owner of Brisbane’s iconic Toombul Music.

But Mr Bull says the support Archie and his family have received from Hear and Say over the years has been immense, and his grandson is hearing and communicating at the same level as others in his age group.

“The beauty of sound is something which we all take for granted until one of your own is disadvantaged,” Mr Bull says.

“Archie will turn four in a few months and his progress at Hear and Say has been nothing short of amazing. He is not missing a moment of everyday learning, and his social skills are simply endearing.”

He is now able to share his grandson’s story and raise awareness and funds to support the amazing work of the organisation through an afternoon of music and inspirational stories to ensure more children can continue to receive the gift of sound.

Mr Bull has raised around $30,000 for Hear and Say in the past three years through his concerts at the Mooloolaba Surf Club, as well as smaller concerts he performs for community groups throughout the year.

“It costs $10,000 a year for five years just to teach one child at Hear and Say and while they get some government subsidies, they have to raise the majority of their funding through events like my concerts,” he says.

Last year, Archie jumped on stage mid-concert to help his grandad belt out Elvis’ All Shook Up and Mr Bull says there’s no telling how his delightfully unpredictable grandson might contribute to the entertainment at this year’s concert.

The Buderim Male Choir, Mason Hope and The Widgee Brothers will also perform during the afternoon and guests will hear from Hear and Say founder, and Queensland Senior Australian of the Year, Dr Dimity Dornan.

Dr Dornan will share stories about Hear and Say’s opening on the Sunshine Coast and the role the community plays in the organisation.

“These concerts mean so much to all of us at Hear and Say because it is the true meaning of community spirit,” she says.

The Gift of Sound concert will be held on September 9 from 2pm to 5pm at the Mooloolaba Surf Club. Tickets are $25 and include morning tea, hours of live entertainment, raffles and a chance to bid on a signed and framed 2018 Brisbane Broncos jersey.

For tickets, got to hearandsay.com.au/thegiftofsound or call Hear and Say on 3850 2111 for tickets.

Mum in fight of her life
A legacy of love