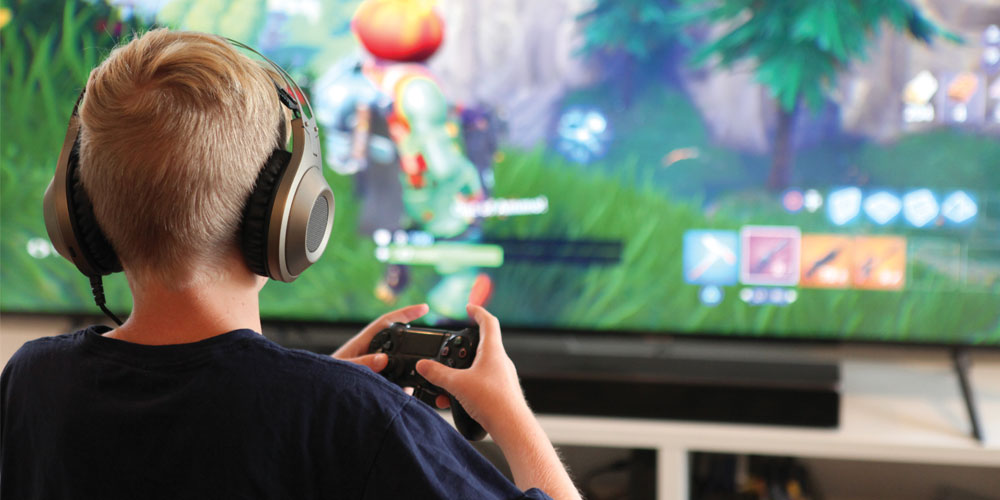 You jump out of a flying bus into a post-apocalyptic, zombie-infested world with nothing but a pickaxe. Somewhere in this cartoonish world, 99 people are trying to kill you. Your job is to get them before they get you.

Sounds simple enough and not unlike a bunch of other video games out there. So why is Fortnite so popular and addictive? Does it really deserve the title some psychologists have labelled it with: digital heroin?

Definitely not, according to 15-year-old Sunshine Beach State High School student Jason Norman, who has been playing Fortnite in the popular Battle Royale mode for a year.

Jason plays Fortnite about three times a week, for up to three hours at a time – not a lot compared to some players. He says he’s a responsible gamer, playing mainly on weekends and keeping up his outside interests like soccer and friendships.

“The media says Fortnite is ruining kids’ lives,” he says. “I think they’re blowing it way out of proportion. In one of their reports it said it’s damaging kids’ brains and turning them into serial killers. They said it’s a kill or be killed game. It is technically, but if you want to get down to logistics, it’s an elimination game. You get re-spawned.”

He says he knows students who play the game every day after school, but while he concedes it could become a serious addiction for some, they’re not in the majority.

Reports of Sydney man Luke Munday assaulting his pregnant wife for interrupting his game and a nine-year-old UK girl who wet herself rather than stop playing are extreme examples, he says.

“I haven’t seen someone get that badly affected by a video game before. I don’t think it’s that addictive for most people… Video games can be addictive to an extent, but even with Fortnite, the average player will generally stop playing after four hours because the game does get boring.”

Fortnite became an instant success when it was released in 2017 by Epic Games. According to analyst firm SuperData, it was the top-grossing free-to-play game in the world last year, earning an estimated  $2.4 billion over 12 months through in-game purchases. There are more than 200 million registered players, with an estimated 80 million players a month battling it out across multiple platforms. Fortnite has now joined the world of e-sport – Epic Games is offering  a prize pool of $100 million during the 2018/ 2019 season over a range of tournaments.

The good news for concerned parents is Fortnite doesn’t contain the kind of gratuitous violence found in other battle games and on the plus side, it encourages teamwork. There’s also a creative aspect to the game, which involves building, searching and acquiring resources.

Now for the bad news: it is about as addictive as video games get. According to doctor Jared Cooney Horvath, an educational neuroscientist and author of the new book, Stop Talking, Start Influencing, the makers  of Fortnite undoubtedly set out to create  the most addictive game they could.

“There’s no way in hell they didn’t sit around a table and say, ‘what leads to the biggest addictive behaviours?’” he says. “There are three primary forms of addiction and they picked the sweet spot – the perfect crossroads between those three. It couldn’t have been done by accident.”

Dr Cooney Horvath says the first is the kind of addiction you see in gambling. It’s a three-step process. You get an environmental cue which triggers a specific behaviour and you get a reward.

“Your brain says, ‘I feel good’,” he says. “The more you go through that, the more you feel good before you even start playing the game. You get the dopamine hit before you even do it. People just start feeling good even thinking about going to the casino.

Jason says this is what makes Fortnite so much fun. “It’s very different to other games,” he says. “I used to play other games like Battlefield, but Fortnite is so different because it has a building aspect and every game is different. It can vary with weapons, players, different tactics people use.”

Addictive behaviour number two concerns ranking – the need to outdo others and be on top. This is where traditional video games sit. The third addictive behaviour is called a ‘master addiction’, which is the drive to achieve personal mastery. Think marathon runners punishing their bodies just to shave  a second off their time.

“With Fortnite, one of these three addictions seems to hit everyone,” says Dr Cooney Horvath.

There’s no addictive substance involved, like alcohol or tobacco, but the brain behaves as if there was. “With drugs you have an added angle in that any particular drug will increase the receptors in the brain for that drug and the brain will adapt by making you smoke more. But the chemical markers for addiction are identical. It doesn’t matter if it’s exercise, video games or booze.”

Dr Michael Nagel is an associate professor at the University of the Sunshine Coast. An expert in neurological development in children and adolescents, he says gaming  is more attractive to young men due to its competitive nature, and we still don’t know the long-term effects of too much gaming on developing brains.

“A raft of studies are coming out of Southeast Asia where we are seeing a lot of young men spending a disproportionate amount of time on gaming,” he says. “It might be having a deleterious impact on the human brain. We think it might be impacting on the reward systems in the brain, because it elevates dopamine and gives you cravings  to play the game.

“Let’s be clear: games and devices and apps are designed to get our attention. Tristan Harris, a product manager at Google, came out and said what people don’t realise is that companies that produce games hire experts in gaming psychology and gaming addiction to make sure people are going to keep playing their games.”

It’s no wonder increasing numbers of parents are tearing their hair out trying to get their kids to lay off Fortnite. There are media reports of children attacking their parents when the game is confiscated, and it’s not the child’s fault.

“If you set limits, they’ve got to be from the very beginning,” says Dr Cooney Horvath. “The dopamine hit comes before the action, so setting the limit has to happen before that switch occurs or man, you’re going to have an uphill battle. Once the addiction starts, it’s hard to stop it. You have to sit down at the dinner table while the child is still cognisant and set clear rules and clear consequences.”

Dr Cooney Horvath says if your child is having difficulty moderating their screen time, showing less interest in other activities and friendships, it’s time to take action.

“If it’s so bad you’ve got to scrap it, scrap it,” he says. “But you could also try the wean system. Pick a week when the kids are on vacation from Sunday to Sunday, and say ‘your butt is at home. There’s no video games and I’m watching you.’ It sucks, but they’ll get over the first hump.

“After a week, you’ll be able to reason with them better. If they normally play two hours a night, you say ‘okay you’ve got 90 minutes’. Give them something to acknowledge their efforts after that – an ice-cream or a night out.

“Say ‘thanks for going 90 minutes. Next week, let’s shave some more time off.’ Sometimes it’s what you’ve got to  do. Sometimes you replace drinking with exercise. It’s replacing one addiction with another, but by god it’s better than the unhealthy option.”

Jason Norman can’t envisage a time when Fortnite will lose steam, saying it’s just going to keep growing and growing. Unless, of course, another game comes along to knock it off its pedestal. “Another game came out recently called Apex Legends,” he says. “It’s getting heaps of players – celebrities… everyone plays it.”

Whether it becomes as huge as Fortnite remains to be seen, but one thing is certain: when it comes to anything potentially harmful for children, parents must be the gatekeepers. “When I’m talking to parents, I say let’s just remember devices and phones are not a right,” says Dr Nagel.

“A child does not have a right to play a game or have a phone. It’s a parental responsibility to make sure whatever time they’re spending on a device is balanced by time outside.”

Jason puts it even more directly. “It’s kind of dumb how parents blame the game,” he says. “Some parents don’t want to bother having to monitor their children.

“They just want to chill, come home and relax instead of getting into an argument with their kids over Fortnite. Parents should be watching out for their children, monitoring when kids are playing Fortnite. They need to understand the children are only going to play the game if you let them play it.”

Is gaming bad for children’s brains?

“I see video games as a good diversion but past a certain limit I  see no benefit to a person’s ability to interact with the world around them,” he says. “Past the diversion level it becomes pointless.

“There’s a certain moment when you have to say ‘okay, I have to put enjoyment on hold and I have to go through a process of learning something or meeting someone or doing something. Are you learning the cognitive skills that we want you to have?’”

While kids are quick to point out to parents that they’ve made friends on Fortnite, Dr Cooney Horvath says it’s no replacement for real relationships.

“If they’re playing too much Fortnite, there’s not enough friend time and not enough outside time,” he says. “They start to define friendship as the people they meet on this game. All of our research shows networking friendships like that  do not serve the same function as actual in-person relationships. They don’t lead  to the same fulfilment, closeness and personal growth. They are relationships without any depth to them.”

Dr Michael Nagel says because the brain doesn’t fully develop in females until around 25 and even later in males, it’s important for growing brains to be engaged in the right activities.

“During the teen years there’s a whole lot of restructuring going on,” he says.

“Teenagers are very vulnerable to screens. I call it environmental assault. There are peak times during adolescence when their brains are more vulnerable and we don’t really know yet what the long-term impact of screen time is on the human brain, as it’s relatively new.”

Women stand up and speak out
Flood of tears