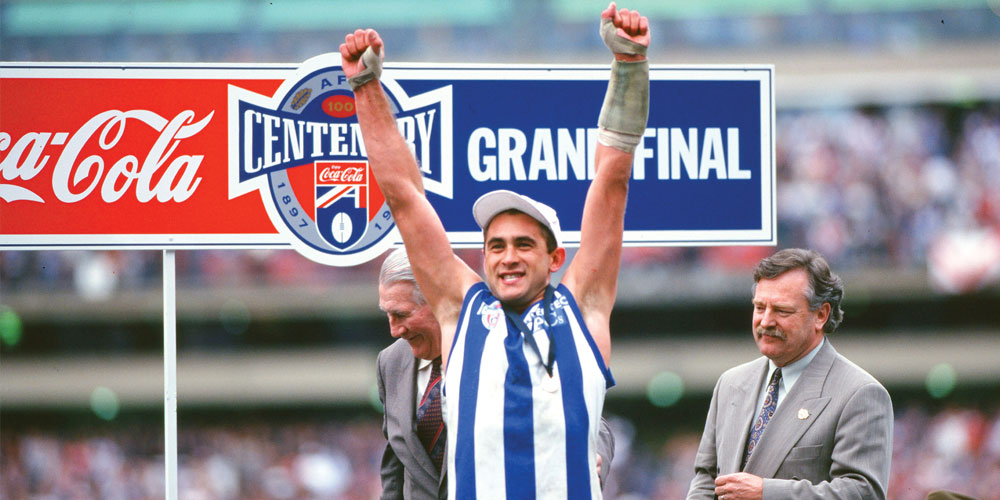 Wayne Schwass knows what it feels like to wear a mask. A mask that shows the world you’re happy, you’re successful and you’re at the top of your game when you’re not.

Not on the inside. On the inside, you’re suffering, you’re in pain and you want to end it all. You fear if the world finds out, you’ll be judged a loser, criticised as weak. So you keep wearing that mask until one day, your world comes crashing down.

That day came for the former AFL player on July 26, 1993. He was driving home from training, stopped at a set of traffic lights and broke down.

It was a nervous breakdown and he completely lost control of his emotions.

When he arrived home, he sat in his car for an hour-and-a-half, riddled with fear, shame and embarrassment, afraid to go inside and face his fiancee.

The then 23-year-old believed it wasn’t how men should feel or behave, but at the insistence of his now wife, he saw a doctor and was diagnosed with depression.

It was the start of a long road to wellness, one where he says he contemplated suicide “hundreds of thousands of times in a four-year period from 1993 to 1997”.

It took until 2006 for Mr Schwass to publicly announce he had suffered from depression throughout his AFL career.

There’s a famous photo of him on AFL Grand Final day in 1996. He’s standing triumphant in front of 94,000 spectators in his blue-and-white North Melbourne shirt, medal around his neck, arms thrown into the air in victory, a huge grin plastered on his face.

He Tweeted the photo on December 13, 2017 with a caption: “This is what suicidal looks like.” The smile was nothing more than a mask.

In 2017 he founded PukaUp, a social enterprise aimed at encouraging people to have authentic and genuine conversations about mental health and wellbeing. In the Hindi language, pukka means ‘authentic’ and ‘genuine’, two words that describe Mr Schwass perfectly.

Sunshine Coast locals will have a chance to hear him talk at a lunch event being held at Venue 114 on September 12, which coincides with R U OK? Day and is being run in partnership with the Sunshine Coast Mind & Neuroscience – Thompson Institute.

“R U OK? Day has done a fantastic job with building a platform and focusing on a particular day, but they would acknowledge – and have done to me – it’s a challenge to expand that across 365 days,” Mr Schwass says.

“Since we founded in 2017, we’ve invested a great deal of effort on a daily basis, creating a great deal of content, including a suicide prevention documentary which was aired on Channel 9, and two series of podcasts talking to high-profile people who have normalised the issue, as well as creating tools and strategies that help people manage their emotional health and wellbeing.

“I deliver somewhere between 50 and 60 presentations annually across the country and we are focused on the preventative, proactive space. With all due respect to the wonderful organisations out there that are working in the crisis area – and they need to be – the system is overwhelmed, underfunded and under-resourced.

“We’ve been reacting historically for decades and it’s not working. We have more people in crisis, more people unwell and more people attempting to take their own life, and tragically, more people that are.”

Mr Schwass doesn’t beat around the bush when he suspects someone might be suicidal and has regularly had to broach the subject with people around him.

“I’m willing to have a challenging conversation,” he says.

“I ask them if they have a plan, if they’ve picked an area. I ask them if they’ve thought about a method. I need to understand very quickly, is it something they’re just thinking about, or have they gone to the effort of deciding on the date, place and method. If they have, then I ring Triple Zero and I stay there until the professionals get there.”

Mr Schwass has been a mental health advocate for 13 years and in that time, he’s learnt that destigmatising suicide is all about opening up a conversation, and allowing people to be vulnerable without fear of judgement and criticism.

Mr Schwass says being male and a footballer were two contributing factors that led to his breakdown, and stands before audiences to show them it’s okay to be a man and talk about emotions; that there’s nothing to be afraid of.

“I was conditioned to disconnect emotionally because I’m a man,” he says. “We need to rewrite the narrative. It’s causing so much destruction across our country.”

Mr Schwass feels uncomfortable when he watches kids’ sport and sees the way some coaches and parents talk to the children, even in this more enlightened day and age.

“If there’s a coach who is yelling, screaming or abusing their players, they are sending toxic messages. If we don’t change the messaging we send our children, we’re narrowing our child’s ability to remain emotionally engaged.

“Don’t cry, don’t be a girl, be a man. All that stereotypical language is disempowering the individuals. It’s conditioning them based on how we’ve been conditioned.

“What makes it more personal for me is I lived in that world through AFL football. It’s really destructive and unfortunately, the people sending these messages are not aware of the messages they’re sending.

“They’re behaving how they were treated when they were younger. I believe we need to empower, support and encourage kids in particular to be emotionally connected, instead of embarrassing or scolding them.

“Sit down and question your own messaging. Is it constructive, supportive and empowering, or is it toxic, destructive and disempowering?

“What impact do you want to have on the children you’re coaching? We have a responsibility to be aware of what sort of message we’re imparting to younger generations.”

Mr Schwass says Australia places a lot of importance on getting kids physically active, but not enough attention on their mental and emotional wellbeing – and the same goes for adults.

He wants Australians to treat their mental health as seriously as their physical health and through PukaUp, gives them the tools to do so.

“In my case, medication played a role, lifestyle played a role. There are a number of different avenues to look at, but one thing we try to do is to give people information so they can start to make different decisions.

“Why would you wait to get sick before you do anything to help yourself? By investing in a healthy diet, sleep, exercise, eliminating alcohol because it’s a depressant, these things will have a profoundly positive impact on your health and wellbeing.

“We want to make our programs available to everyone, to give people the tools, capacity and confidence to allow them to start to manage and maintain their wellbeing, and do it proactively. I’m crazy enough to think PukaUp can change the world.”

Wayne Schwass will speak at In Conversation: Normalising Mental Health on Thursday September 12 at Venue 114, Bokarina. Also appearing are Cara Koenen and Leon Stensholm with Jillian Whiting as emcee. The event is proudly sponsored by My Weekly Preview. Visit venue114.com.au/events.

Climb for a cause
Shout out!