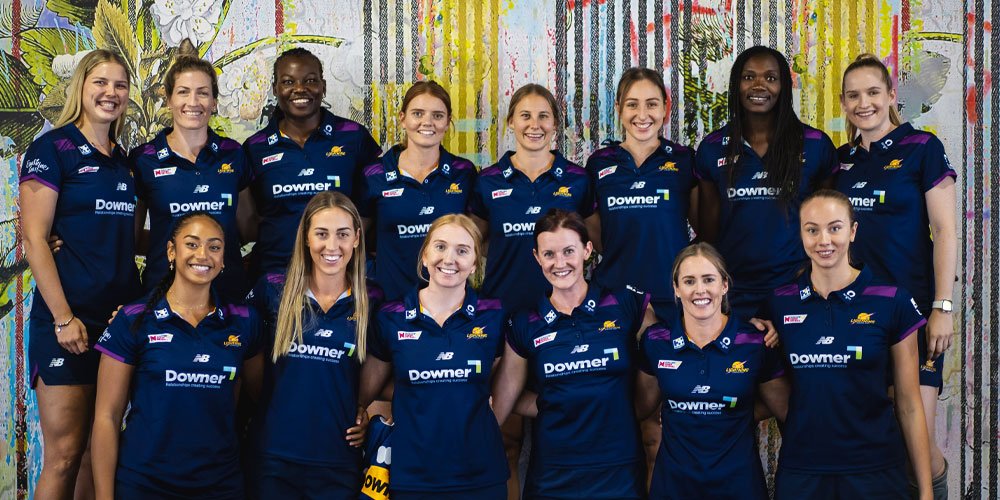 Sunshine Coast Lightning is marking five years since it launched, and in that time, the club has gone from strength to strength at a community grassroots and national level.

The team may not have made it through to this year’s grand final after a semi-final loss against West Coast Fever on Saturday, but there is still plenty
to celebrate.

In its five years, Lightning won back-to-back premierships in its first two – a feat no other start-up sporting club has achieved – and in 2019 went on to secure the minor premiership, playing in a third consecutive grand final.

When the pandemic began in 2020, Suncorp Super Netball (SSN) teams competed within a centralised Queensland hub format. Lightning finished second, qualifying for a fourth consecutive finals, before bowing out at the preliminary finals.

As one of five foundation players, Maddy McAuliffe tells My Weekly Preview she remembers when no one knew what Sunshine Coast Lightning was.

“When we started no one knew anything about us,” the wing defence player says.

“I remember very clearly applying for rental applications with three of the other teammates and we were putting the CEO’s number as our contact for work because we didn’t have an office.

“People thought we were a lighting company – nobody had any idea what it was. Flash forward five years and it would be tough to find someone on the Coast who hasn’t heard of Lightning or the netball team. It’s been an absolute crazy journey, but I’ve loved every second of it.”

Lightning CEO Danielle Smith says when reflecting on the past five years, she feels pride in the club and says its success is a combination of the support from the Lightning family, members, fans, partners and the wider Sunshine Coast community.

“There is a real sense of pride in the club and what we’ve achieved as a united group of people in and around the club,” Ms Smith says.

“Everyone’s played a role in building the club and contributing to its success. We’ve all worked incredibly hard; the success doesn’t come easy that’s for sure.”

As part of the SSN league, Sunshine Coast Lightning was established in August 2016 and is the region’s first and only national, professional sporting team.

A joint venture between NRL club Melbourne Storm and the University of the Sunshine Coast (USC), both organisations – together with Sunshine Coast Council – have been critical in bringing Sunshine Coast Lightning to life.

“The first year establishing the club was the hardest working year of my life but also the most rewarding,” Ms Smith says.

“We really engaged with the community early on. We met with netball associations in the region, council, local media partners.

She says the success of the Lightning and interest in netball is trickling down to local community clubs and at USC with the implementation of a netball academy.

“There’s definitely increased registration in local netball and that’s directly attributable to Lightning as they’ve seen success in their own backyard, and it’s given them something to aspire to.

“We’ve also been working closely with USC and developing an academy for teenagers and aspiring netballers.

“They get to be part of the Lightning environment and also study at USC so it’s a great outcome for netball and study.”

The academy feeds into the USC state netball team, USC Thunder, which acts as a pathway onto the Lightning.

Ms McAuliffe says the program is already producing young, local athletes who no longer need to move to a city to play professionally.

“I think it’s been crucial. There’s always been a need to shift to a city if you wanted to pursue a netball career.

“We are seeing athletes comes through like Ashlee Unie who went to school at Mathew Flinders, played into our USC Thunder team and was selected in the
team this year.” 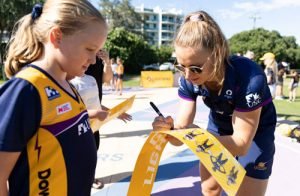 Player Mahalia Cassidy with a fan

Reflecting on this season, Ms McAuliffe says COVID has presented a range of challenges for the league, club and players, with restrictive player bubbles and a cloud of uncertainty around games.

“COVID’s been a really big challenge, she says. “There have definitely been some adjustments, but I think we are all just so grateful we are still able to play.

“The fact we have got to the end of this season is just incredible because there was definitely a stage this year when I didn’t think it was going to happen.”

Ms Smith says some of her favourite moments have come just as much off court as they have on court and have mostly been driven by the supporters and fans.

“The success of the team and the first two premierships are unbelievable memories, but some of the things that also stand out are the little moments.

“One of the biggest ones was the semi-final we played at Brisbane Entertainment Centre against the Queensland Firebirds.

Ms Smith recalls after a 2019 match against NSW Swifts, the team commented on social media about the support of the Lightning crowd.

“The noise and sound coming out of that match was unbelievable and for the opposition to say you’ve got the loudest and most passionate crowd in the whole competition was incredible.

“The players take such a lift from having the community behind them.”

Looking ahead to the next five years, Ms Smith hopes for the club’s hard work and success to continue. She is also hoping a successful bid to include netball as an Olympic sport in the 2032 Brisbane games will help create better infrastructure for the sport locally.

“I would love to see Lightning grow and prosper to be an even greater integral part of the Sunshine Coast community and wider Queensland.”