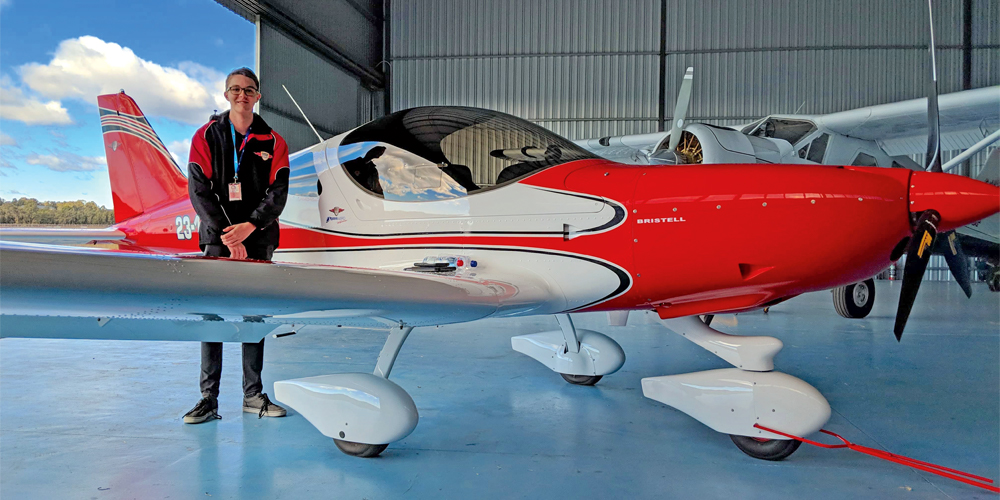 Before any of his peers were able to get their learner driver’s licence, Liam Morey was named the youngest person in Australia to hold a recreational pilot’s certificate.

In March last year, Liam was 15 years and five weeks old when he completed the certificate he began in May 2016, which he self-funded by working part-time jobs while studying at Sienna Catholic College.

Not content to rest on that accolade, the Buderim resident is preparing for an even bigger challenge – breaking a Guinness World Record to become the youngest person to circumnavigate Australia solo and unassisted.

The 16,000-kilometre journey will see Liam take in 99 per cent of Australia’s coastline around all of the states and territories including Tasmania after he sets off in September and the journey could take up to four weeks, depending on the weather.

Liam admits when an aviation friend he was mentoring suggested he give it a go, he initially brushed it off.

But after speaking with his flight instructor Ivan Tyson, he realised he could make it a reality with financial backing and when his first sponsor, Sunshine Coast Aero Club, came on board, Teen Around Oz became a reality.

“I learned to fly at SC Aero Club, so to have them the first on board was wonderful. I have written about 100,000 words to companies and organisations seeking sponsorship and partnerships and we have 80 per cent of our $30,000 funded and we are still a number of months out,” he says.

“Ivan has become the logistics coordinator for the trip and will plan the routes and share his experience as a pilot with me.”

The Teen Around Oz team is jam-packed with expertise with Lachlan Smart, who became the youngest person to circumnavigate the globe solo in a single-engine plane in 2016, on Liam’s advisory team, as well as Ryan Campbell, who held the record in 2013.

The current record is held by Oliver O’Halloran, who completed the trip at 17 years and nine months, and Liam, who is now in Year 11, will be 16 and nine months by the time he completes the world record attempt.

He says the longest flight he had undertaken to date has been a three-hour navigation through the Gold Coast and Amberley airspace but the arrival of his Bristell 1131, a light sport aircraft RA-AUS from major sponsor Anderson Aviation, means Liam will be airborne as often as possible on longer flights to get a feel for the aircraft before his epic journey.

Growing up in Twin Waters watching jets fly over him as he bounced on the trampoline as a child, Liam says he has always held a fascination for aviation.

“My grandfather is the only family member who has been in aviation and he passed away when I was quite young, but I have found there is a real community of supportive people in aviation, I love everything about it,” he says.

“I’ve had to work 21 hours for every flying lesson I’ve done, and you need 25 of them throughout a pilot’s licence. But it is really humbling to think that so many people and big organisations are coming on board for little old me to help me make my dream come true. I am extremely grateful.”