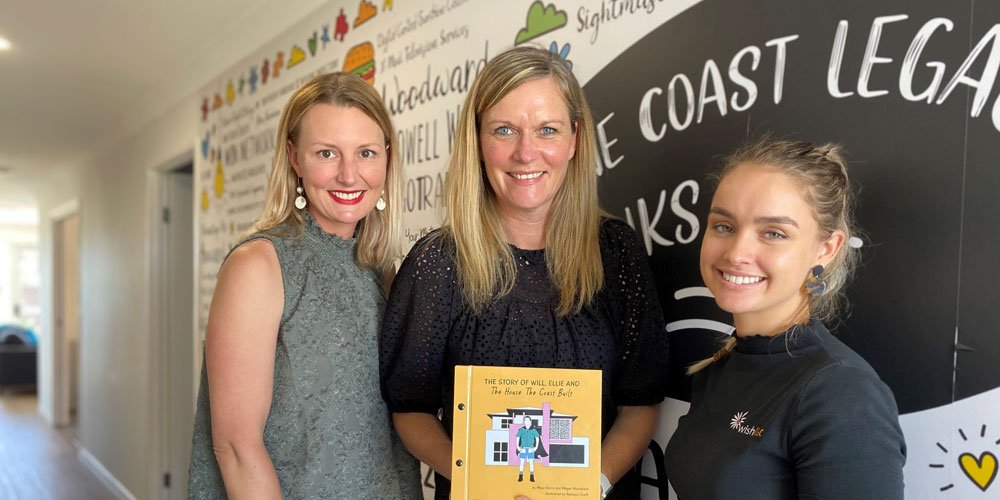 The book was made possible by two local writers, Maya Gurry and Megan Woodward, who donated their time and skills to make the story of fictional characters Will and Ellie come alive.

It tells the story of The House The Coast Built and the tale about how the house became a ‘home’.

“I think it’s sometimes difficult to explain what the house is about, and the easiest way to do that was in story form,” author Maya Gurry says.

“So the story is of Will and Ellie. Ellie ended up in hospital and Will and his parents needed somewhere to stay close to the hospital to be able to support her and feel like they could be close to a loved one.

“And that’s what the house is really all about, making sure families can be close together and that they have a safe place and feel like they are at home rather than being in hotel accommodation.”

Co-author Megan Woodward says she was thrilled to be part of the project.

“Maya and I are both creatives, we have PR and journalism behind us… and we put on our writing hats as a way of explaining why this house is so important for families who need a place to stay and be close to their kids,” Ms Woodward says.

“It’s exciting to be part of something that is going to be a Sunshine Coast mainstay forevermore.”

Wishlist launched The Story of Will, Ellie and The House The Coast Built last week.

For more information about Wishlist House or the book visit wishlist.org.au or phone 5202 1777.

More than a meal
Everyone welcome at new indoor skatepark