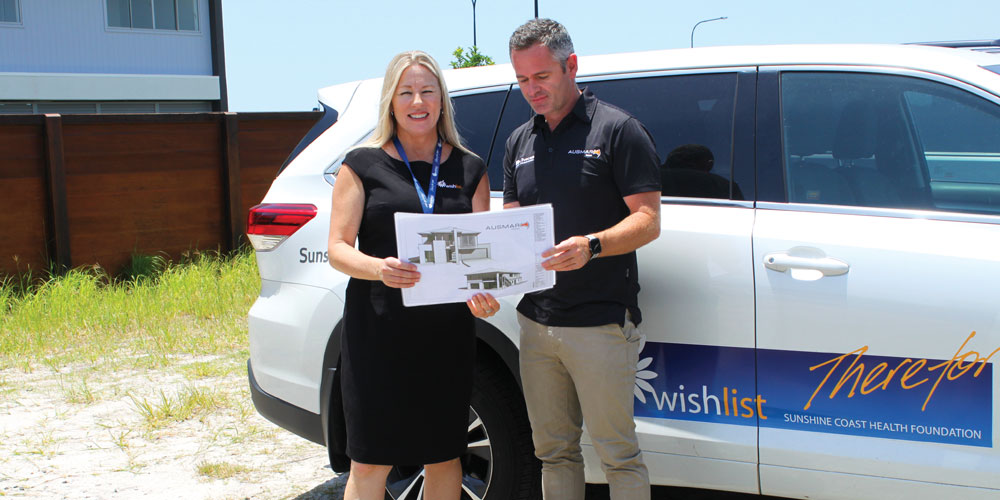 The land has been secured and the plans drawn up, now Sunshine Coast charity Wishlist is reaching out to the community to help bring the organisation’s ambitious House the Coast Built project to life.

Unlike previous projects, where charity partner Ausmar Homes build homes and donate proceeds from the sale to Wishlist, the latest project will become an asset for families who need to stay close to their loved ones while they receive treatment at the Sunshine Coast University Hospital (SCUH).

The two-storey, six-bedroom, six-bathroom home will be built in Affinity Place in Birtinya on land Wishlist was able to purchase from the proceeds of Mix FM’s Give Me Five for Kids and the Wishlist Spring Carnival lunch.

The home is within walking distance of the hospital and will have the ability to accommodate two families at a time.

Wishlist CEO Lisa Rowe says Wishlist has owned Reed House, which is located next to Nambour Hospital, since 2009 to provide accommodation to the families of patients, but it is a half-hour shuttle ride away from SCUH.

“There is a need for something closer and this project will go towards meeting that need,” she says. “We feel there is certainly a buzz about this project and that comes down to the fact it’s a legacy project and will be there for countless families at a critical time in their lives forevermore.”

This will be the fourth House the Coast Built project Wishlist has done in conjunction with Ausmar Homes. The proceeds from the last two homes, built in 2012 and 2015, raised more than $600,000 that was used for ophthalmology equipment for the local public health service.

Ausmar Homes business unit manager Josh Green says they have drawn up concept designs for the 450-square-metre block and submitted them to Sunshine Coast Council to gain the necessary building approvals to hopefully turn the first sod in February.

“Dual living is a tough thing to do and do it well,” he says.

“We wanted the families to have their own space in that time of need. The last thing they’d want after coming home from hospital is to be confronted by other families who are in the same boat.

“They can come home and unwind until their next shift at hospital or get their head around what’s just happened if it was an emergency situation. If they want to be more social, they can go and chat to other family.”

When the green light is given to begin works, Mr Green says at least 100 people including Ausmar staff, suppliers and sub-contractors will be working on the project, donating their time and equipment.

“These guys are not just donating their time, they are giving up the opportunity to earn some good money on other projects as well,” he says. “The Coast is really busy at the moment and it speaks volumes that these tradies are still willing to give for the cause.

“We’ve had not only overwhelming support from our guys, but even those we don’t usually deal with are wanting to jump in and help out.”

Ms Rowe says while the labour and the majority of the supplies needed to build the house are already covered, the wider community can get involved in bringing the projects to life by “gifting things that will make the house a home for the families that need it most”.

Wishlist has launched an e-commerce site where people can purchase whitegoods, crockery and furniture to fit out the house. The site went live on November 16 and you can click through to the store by visiting wishlist.org.au.

Starting the right conversation
The future’s bright with solar