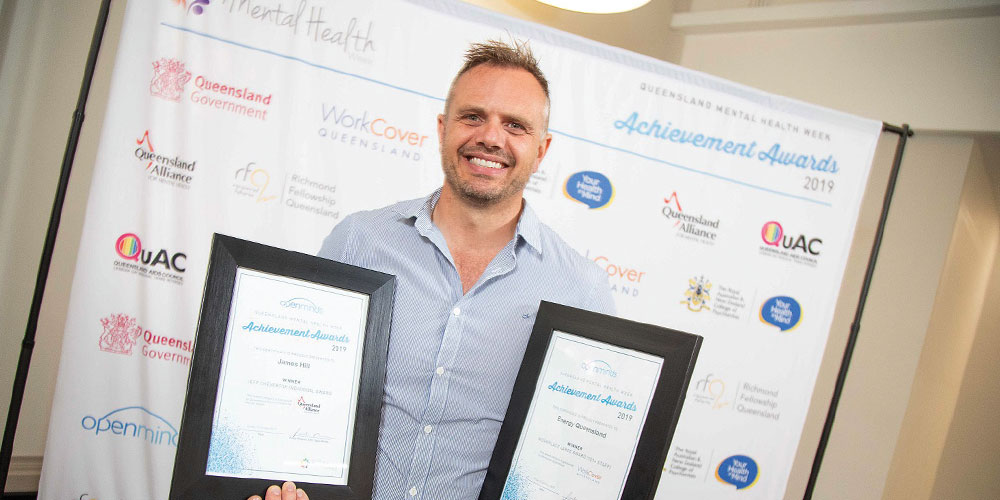 Caloundra resident James Hill has been announced as the winner of the Jeff Cheverton Individual Award category in the 2019 Queensland Mental Health Week Achievement Awards, for the work he does in raising awareness of mental health and reducing stigma.

By openly sharing his own mental illness experience, Mr Hill is helping to create better awareness of mental health issues in communities. “I share my story as often as I can where it’s valuable,” he says.

“It’s a real-life story and is still connected to emotions. I have to prepare myself each time and sometimes you don’t realise how much it takes out of you.

“It has been a significant part of my life and I want to reach as many people as possible to make a difference.

“One of the biggest challenges I still see is breaking down stigma that surrounds mental illness,” he adds. “There is still so much work to do.

“Everyone has a part to play and it can start with something as simple as understanding mental illness and being okay to talk about it in a non-judgemental and supportive environment.”

Mr Hill says he started his work life as an electrical apprentice in his native England and says he had no concept of mental health as a youngster.

“I always had the mindset that it didn’t affect people like me,” he says.

“The environment I was working in very much had a mentality of ‘toughen up’ and that was my biggest undoing I suppose. It was in the mid-2000s when I began to struggle and I didn’t understand what was going on.

“It took me to some pretty dark places, to the point where I was thinking about ending my life.

“A survey from Beyond Blue came up on my phone and it was a test for depression and anxiety. In my head I was telling myself this wasn’t what was wrong with me, but I took the test anyway to rule it out. The results came back and said I needed medical help.

“If I hadn’t have come across that test, I don’t know what would’ve happened.”

Mr Hill says he physically looked fine and couldn’t comprehend that he would need to visit a doctor for a mental health issue, but taking this brave step set him on his course to being able to better recognise his warning signs and manage the symptoms when they arise.

Earlier this year, Mr Hill was a guest panellist at the Queensland Mental Health Commission’s Shifting Minds forum and says “every conversation has the potential to save a life”. “The journey we have been on is so worthwhile because we are bringing some of the stigma out of the shadows and creating an environment where people feel genuine support,” he says.

“Often people feel alone. If we can help guide people along the path to care and support, we’ve made a difference.”

The Jeff Cheverton Individual Award category, which Mr Hill won, recognises individuals for their outstanding work in improving the quality of life of Queenslanders living with mental illness and promoting their inclusion in the broader community.

His workplace, Energy Queensland, also won an award for the mental health support and advocacy programs created by Mr Hill and his colleague Aaron McCann.

Mr Hill says anyone who is feeling out of sorts should reach out and talk to somebody.

“There’s a lot of help out there. You don’t have to do this alone,” he says.

“If you had a sore ankle, you wouldn’t just think you could walk it off and it would get better. You’d go to a doctor before it got worse. Mental health is no different.”

National support service Beyond Blue reports that in any one year around one million Australian adults have depression and more than two million are living with anxiety.

What’s more, in Australia, it’s estimated 45 per cent of people will experience a mental health condition in their lifetimes.

If you need help, or suspect someone you know is in need of support, you can contact Beyond Blue on 1300 224 636. To take the depression checklist survey, go to beyondblue.org.au.

Continue Reading
You may also like...
Related Topics: mental health