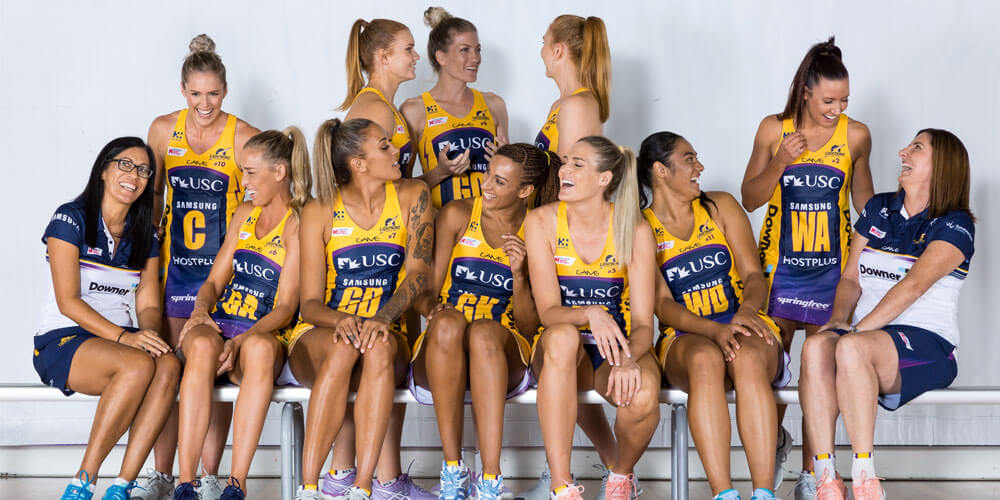 The Sunshine Coast Lightning hit the Suncorp Super Netball competition with such force, talent and endurance that they secured the premiership in their maiden season, winning over legions of fans in the process.

Not only was this a coup for the region’s sole national sporting team, it placed the Sunshine Coast firmly on the map as a coveted sporting and tourism destination.

As the 2018 season looms, there is no doubt the players will continue to have an impact on the wider community in their roles both on the court and as regional ambassadors long after the whistle blows to kick off round one on April 29, when the Lightning are set to take on the Giants.

The team as we know it from 2017 is largely intact, with wing defence and centre player Laura Langman the only member of the squad not to sign on for another season.

Lightning coach Noeline Taurua has been through somewhat of a roller coaster ride finding a replacement. Her initial pick, 17-year-old schoolgirl Sarahpheinna Woulf, who was poised to make history as the youngest ever player in the competition, suffered a knee injury during training last month.

After having to undergo surgery, Miss Woulf was ruled out for the season and Ms Taurua tapped into the seasoned training partners to name Jacqui Russell as the newest squad member earlier this week.

Ms Taurua says starting their pre-season training in November allowed the Lightning squad critical time to work together and begin to incorporate the groundbreaking sports research being undertaken at the University of the Sunshine Coast, which is part-owner of the team.

Hitting training early was critical, with key players absent for the Quad Cup earlier this year and the loss of Lightning shooter Caitlin Bassett and goal attack Steph Wood as they competed as part of the Diamonds at the Commonwealth Games against their Sunshine Coast teammates Geva Mentor, who represented England, and Karla Pretorius nee Mostert, who was on the South African team.

“With our internationals being away, what that has meant on the positive side is that we have had pre-season games in New Zealand against other franchises and also a match-up against the Diamonds, so we have been able to spend more time with our remaining team members to get our base to be more solid than at this time last year,” Ms Taurua says.

“Even though we had a fantastic year last year, there are so many things that we didn’t cement or put into place with regards to protocols, practices and the holistic program.

“We have so many individual areas that are important in their own right, but the key is how it’s integrated together and that is not necessarily to do with the athletes as such, although they directly benefit.”

Off the court, the Lightning support team has expanded with four new staff members and a focus on efficiency, while looking at ways to incorporate USC sports science research into the training and monitoring regimes of the players.

“We have been looking at GPS and heart rate monitors and trying to find measurements that are going to be meaningful so that we can promote a real explosive type of game, but we need to remember we are still at the foundation stage, which we will be in for another year or two yet, so we will need time to integrate these into real-time games,” Ms Taurua says.

“It’s all about taking us another step in regards to what we’ve always done with netball and pushing ourselves to extend our own performance and level of information.”

Ms Taurua says every one of the players has returned with a burning desire to continue to create a positive “club history” and nobody is going to take their foot off the accelerator.

“We are all really excited by that fantastic year, but we know we can do more, not only for our game, but for what we established for the Sunshine Coast, which is what it’s all about,” she says.

“Our first goal was to make the top four, but that’s just a given. Every year the competition is going to get better and everybody is looking for that point of difference and to be winners. To be in the mix, we have to find that (point of difference) and prove it on the court. Time will tell whether we are able to do that.”

“I feel the competition this year is going to be close, anybody on any given day can beat anybody and that’s why I love this competition so much. In the first six to seven rounds, you might be able to see those teams that may just be slightly ahead of the bunch, but the gap will be so close that it could be anyone’s season,” Ms Taurua says.

“The best part of coaching is when you get into those situations where there’s just one or two goals between the teams. It’s very pressurised and I’ve got a bit of grey hair on top of my head because of it, but that’s what I love the most about the game.”

Visit Sunshine Coast (VSC) CEO Simon Latchford says it was this “nail-biting” element of the sport that got him, and thousands of other locals, hooked on supporting the Lightning.

VSC is a founding sponsor of the team and Mr Latchford says with the population exceeding 300,000, the region needed “something to hang its hat on”.

With 84 per cent of women in households around Australia being the holiday decision-makers, and more than 60 per cent of those women having played or still playing netball, the Lightning was the perfect fit to boost the profile of the region as well as support women in elite sport.

“To be able to use netball to get our brand into those states and territories in Australia and to New Zealand is a great opportunity for us. Although it’s hard to put a number on what the Lightning bring to the region in terms of tourism dollars, it was never about bums on seats as much as it was about creating destination awareness,” he says.

“The finals of the series was screened at 7pm on prime time national TV on the Nine Group, which spoke bucketloads to the value they placed on it and as a result, what people around the country watched for those hours was essentially the Sunshine Coast. Then we were cheeky enough to take out the grand final.

“When you are up against the likes of the Brisbane Firebirds, who have forever been Queensland favourites and back-to-back premiers, it was a real David and Goliath thing. People were absolutely blown away that you could possibly put together a team of that calibre and take out the final.”

Tickets for the Sunshine Coast Lightning home games went on sale two weeks ago and the level of demand was so great, it crashed the website as fans clamoured to get their hands on tickets.

Mr Latchford says he wouldn’t be surprised if the Lighting doubled their reach and economic impact for the region this year.

With a strong membership base of 2300 last year, Lightning CEO Danielle Smith says they are targeting 3000 this season and work is underway with the USC on a redevelopment of the uni stadium, the home of the Lightning, to expand the capacity to a total of 3400 seats in 2019 with the assistance of $7 million in State Government funding.

“That will be a real game-changer for us. We have been limited growth-wise this season. We sold out every [home] game last season and we are on track to do the same again this year. This redevelopment will open up extra capacity for us and give more opportunities for the community to come along and watch the games,” Ms Smith says.

“We have renewed all of our sponsors and attracted new ones, so we have a strong financial base going forward. We are also excited to continue with the strong partnership with the USC, it is pretty unique for the Lightning to be able to train, play and have the HQ all in one location, as well as access to the research and technology being developed at the uni.”

Ms Smith says with the hugely popular ambassador program seeing Lightning players assigned a local club each year, registrations at these smaller clubs have spiked more than 15 per cent, which is keeping more Coast kids active and providing a strong pool of talent that might go on to become future Lightning squad members.

Sunshine Coast Council Economic Tourism, Events and Sport councillor Jason O’Pray says he always believed the Lightning would succeed and is proud to support the team, which is the realisation of a decade-long dream for the council.

“The creation of this team and the support of the Melbourne Storm, USC and various sponsors contributes to building our region’s reputation as a major sports and events destination. The Sunshine Coast is fast becoming the number one pick for a number of sporting codes’ pre-season training camps,” he says.

“We have a high enquiry rate from [sporting teams] within Australia and around the world and the Lightning’s success has greatly contributed to that. I would love to see an A-League team based here on the Sunshine Coast, but in reality it would depend on availability within the league and the commercial decision from private operators to run and manage a team here on the Coast.”

Cr O’Pray says he was not much of a netball fan before the Lightning came on the scene.

“They converted me and I attended every game last season and plan to do the same this season. I am now an absolute netball fanatic,” he says.

“The atmosphere and fans are phenomenal. Our fan base here on the Coast is huge and we really love and take pride in our team. I love so much that it is a family-orientated event.”

To find out more about the Sunshine Coast Lightning’s fixtures and how to become a member, visit sunshinecoastlightning.com.au.