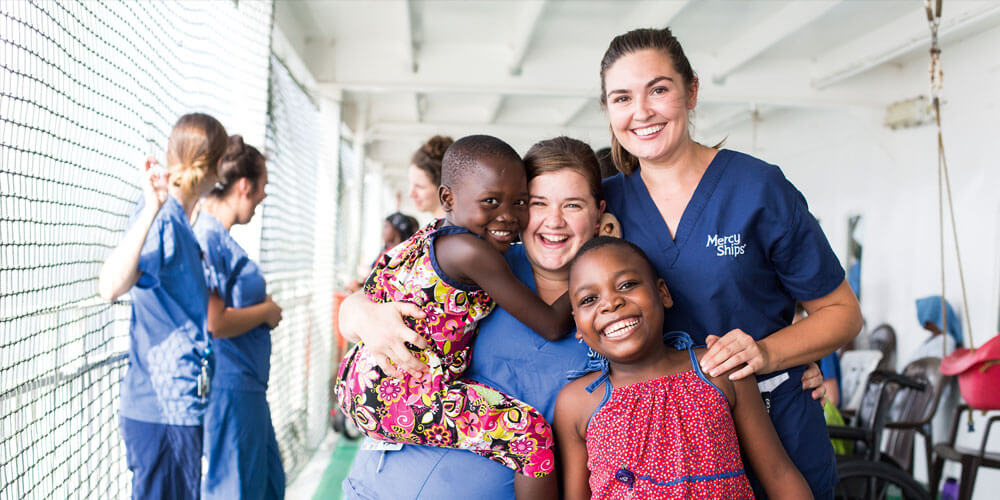 More than 1200 volunteers serve with Mercy Ships every year

The Africa Mercy may be docked half a world away in Cameroon, but the Mercy Ships flagship vessel has long-held ties to the Sunshine Coast.

The charity organisation, which uses a unique platform – a ship – to bring world-class medical care to the poorest nations of the world, was established in 1978 by Don Stephens.

The Australian contingent was run out of Newcastle in New South Wales before the base was moved to Caloundra in the early 1990s by Lynn and Brian Ross.

Since its inception, four ships, including the current vessel Africa Mercy, have served in 150 ports in more than 70 countries providing services valued at more than $1.3 billion, with more than 2.56 million direct beneficiaries.

Each year, more than 1200 volunteers from more than 40 nations serve with Mercy Ships, and Sunshine Coast residents are among them.

Currimundi dental assistant Maryanne Casey and Buderim radiology technician Rebecca Williams have served in the past, and Alexandra Headland’s Kathy Church is about to travel to the ship to work on board as a cook.

Volunteers like Buderim nurse Karen Binns have worked tirelessly to provide almost 4000 life-changing surgeries on board, treat more than 8000 at a land-based dental clinic and provide health-care training to local medical professionals during the 10-month stay in Douala, Cameroon from August 2017.

This has been the first time Mercy Ships has visited Cameroon, which is one of the least-developed countries in the world, with only eight doctors per 100,000 people.

“Our big white hospital ship is their only hope,” Mrs Binns says.

Mr Whitehead says he has always wanted to volunteer overseas and became inspired to serve with Mercy Ships after seeing several television programs about the ship and its crew of volunteers from around the word.

He joined Mercy Ships in late March, serving as an anaesthetic assistant during the free surgeries provided on board.

“The work of Mercy Ships is very important to me, and the patients more importantly. They face a lack of services and finances to have surgery,” he says.

“Everyone has given me great support and since my return, I have been besieged by fellow staff about my experience,” he says. “Long term I hope to continue to volunteer on the ship as long as they require volunteers.”

Mercy Ships managing director Alan Burrell, who is based in Caloundra, says the community can get involved by hosting a fundraising event for the charity, or giving one-off donations. A donation of $25 is enough to provide one day of patient care and $50 equips a doctor for surgery.

“We are incredibly grateful to our fantastic supporters and volunteers,” Mr Burrell says.  “Their generosity is what helps us provide life-changing surgeries in Cameroon.”

The organisation will feature in a National Geographic eight-part series called The Surgery Ship on Foxtel on June 23 and 24 at 12pm. The series will be screened on SBS later in the year.

To find out more about Mercy Ships and how you can help, call the Mercy Ships Australia national office on 1300 739 899 or visit mercyships.org.au.

No place like home for local entrepreneur
Women join forces