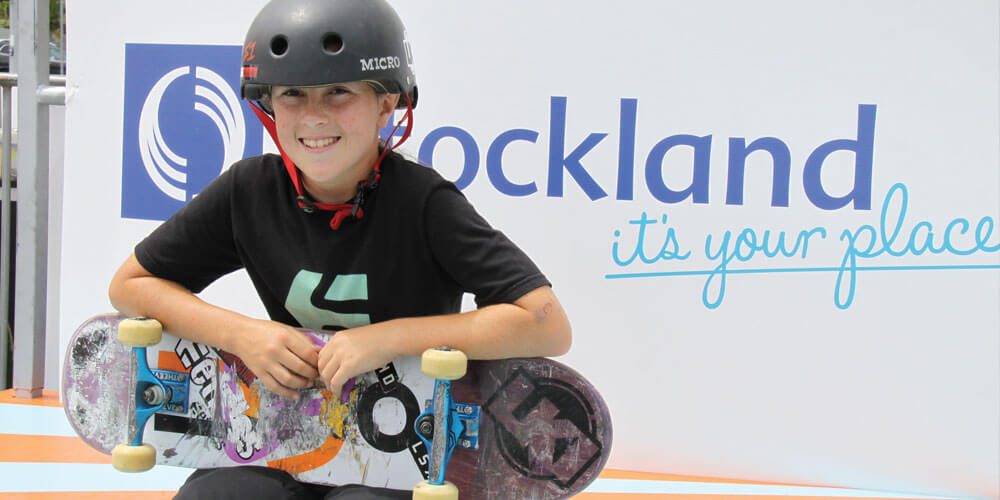 The youngster was pitted against competitors twice her age and height, but emerged victorious, notching up another win on her growing list of achievements since she started competing six years ago. In fact, she was such a regular on the podium in the under 12s category that she was offered the chance to move up to the open women’s division, a challenge which she took head-on, placing third in her first event in Brisbane.

Haylie says a huge highlight was having a shot at qualifying in Sydney for an X Games wildcard spot in October last year, but she didn’t make the cut. “It was a great experience,” she says. “Everything was so big. When you visualise it in your mind, it’s nice and small, but then it’s so big in real life.

“I try to push myself; it can be scary… most of the time it’s scary. But I always try new tricks and new obstacles.”

She revelled in competing alongside her idols Hayley Wilson, Liv Lovelace and Kat Williams, although admits they “keep beating me”.

The Caloundra State High School student says skating is all she wants to do and even a broken arm last year didn’t phase her determination. She was back on her board within a week, cast and all.

Mum Heidi says Haylie lives and breathes the sport and when she is not on her board, she is watching skating movies or videos on YouTube, and even plays with Tech Decks (miniature skateboards you use to practise tricks) when she is unable to do either of the above.

Juggling school work with travel around the country, and now the world, has become a necessity for Haylie as she strives to reach the heights of a professional skating career.

In 2019 she will jet off to the US to compete in the Exposure Skate and Hot Wheels Junior Series with Heidi or dad Peter in tow.

Haylie credits her dad and uncle as the inspirations behind her entering the sport, citing fond memories of riding on her uncle’s long board as one of her first experiences of being on a skateboard.

“I had an old board and used it in my first competition when I was six and I came second and won a brand new deck,” she recalls.

“That’s how I got my first board. I used my old hardware and trucks until I got some from a skate shop. I was so proud that I’d done it all with no help.”

Recognising her dedication to the sport, Haylie’s parents have constructed a skate park in their front yard, complete with rails, ledges, kickers, a bank and quarter pipe.

“It means that when they can’t take me out somewhere, I can skate at home,” Haylie says proudly.

While she is already living her dream, Haylie takes time to support others by sharing her vibrant energy and encouraging those trying out skating for the first time or setting out to improve their skills.