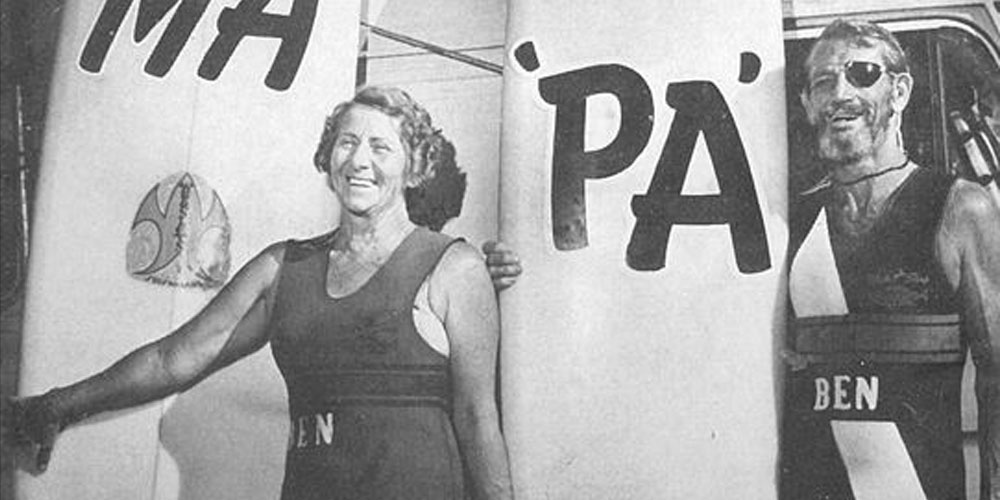 Ma and Pa Bendall with their Woosleys surfboards in 1965. Image: Sunshine Coast Council

An enduring event will continue its tradition of fostering board riding and community spirit at Moffat Beach during the Easter long weekend.

In its 47th year, the Pa and Ma Bendall Memorial Contest is believed to be the second-longest running surfing competition in Australia, behind iconic Bells Classic (60 years).

Named after legendary surfing identities Charles and Marjorie Bendall, it is organised by  the WindanSea Boardriders Club.

“The event is run by local club members, it’s got a lot of tradition and everyone looks forward to it every year,” club vice president Jason Daley says.

“It’s a good community event and it keeps a simple formula.

“There’s a lot of people who don’t surf who come down and support the competition. It’s a great day out for families.”

The Bendalls settled in Caloundra in the 1950s and Charles ‘Pa’ formed the Moffateers in 1966, as a club to promote integrity and sportsmanship in surfing.

Juniors were encouraged to join and were offered free membership.

After his passing in 1973, the inaugural Pa Bendall Memorial Contest was first held in his honour in 1974.

After Marjorie ‘Ma’ died in 2001, the event became known as the Pa and Ma Bendall Memorial Contest.

“It was an honour for surfers to join the Moffateers. You had to be an active member of the community,” Mr Daley says. “It wasn’t just about surfing.”

“WindanSea sort of adopts the same role. There’s an expectation of members to be active members of the community.

“They (Pa and Ma Bendall) are the grandparents of the surfing clubs in the region so it’s very apt that this event is named in their honour.”

The contest is rare in that it is essentially open to all boardriders, so it attracts relative rookies to full-time professionals.

“Anyone is able to enter. It’s been well attended by local boardriders, but we’ve always had people coming in from elsewhere,” Mr Daley says.

“Masters and legends are the most quickly filled divisions and sometimes the most competitive,” Mr Daley says.

“Over the years the names of people who have entered are right up there in the top rungs of surfing,” Mr Daley says.

“It (the event) is really well contested. The calibre of surfers I can already see on this year’s entry list is amazing, with some QS (World Qualifying Series) surfers among them.

“But the good thing about the Pa and Ma Bendall is that surfing against them are people from the community, and many are local boardriders.

A ‘mystery competitor’ is usually announced on the first day of competition and some years there are exhibition events. On one occasion former members of the Moffateers got back in the water to show they still have all the skills.

Last year, it was cancelled due to the impact of COVID-19.

The Pa and Ma Bendall Memorial Surfing Contest will be held at Moffat Beach, Easter long weekend (April 2, 3 & 4), from 9am–5pm. For more stories go to: sunshinecoastnews.com.au